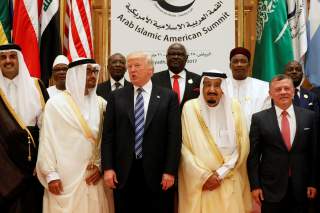 Shortly after President Donald Trump delivered his historic address to the U.S.-Arab-Islamic Summit in Riyadh, a new Middle East crisis erupted. The growing rift between Qatar and its Gulf Cooperation Council (GCC) partners has not only unleashed a crisis of potentially far-reaching geopolitical implications but also threatens Trump’s principal foreign policy success.

The GCC crisis erupted on May 24, when the official Qatar News Agency (QNA) was hacked and quoted Emir Sheikh Tamim bin Hamad Al Thani in a fake statement saying that Iran is an “Islamic power” and that Qatar enjoys “good” relations with Israel. The statement also quoted the emir calling Hamas “the legitimate representative of the Palestinian people,” as well as saying that Qatar had “strong relations” with Iran and the United States.

Unnamed U.S. officials have since attributed the hack to the United Arab Emirates (UAE), a charge that was swiftly denied by Abu Dhabi. Qatari officials, however, allege that the virus which infested the QNA website had been planted on April 20, 2017 and that the hacked statement of Tamim was set to be released on May 11, 2017, ten days before Trump was scheduled to deliver his Riyadh address.

Doha has also requested assistance from the FBI and its British counterpart to take part in its investigation and provided evidence of the alleged Emirati orchestrated hack at a news conference on July 20. It is to be followed up by legal action against Abu Dhabi and Riyadh, who Qatar considers a co-conspirator. It is unclear when Doha will present its legal case to the international community.

On June 5, Saudi Arabia, the UAE, Bahrain, and Egypt severed diplomatic ties with Qatar over allegations that it is supporting terrorism and embraces Iran and its regional agenda. The block also imposed an economic embargo of Qatar—which includes cutting off all food supplies and access to medicine—by closing off land and maritime borders.

All Qatari citizens have since been expelled from Saudi Arabia, Bahrain and the UAE and their citizens living in Qatar were provided a fourteen day deadline to leave. Egypt, however, has not placed any travel restrictions on its citizens residing in Qatar, expelled Qataris living in Egypt or imposed an economic embargo on Doha. Saudi Arabia and its regional partners have nonetheless closed down all air routes to and from Doha from their respective countries. Qatar, however, has not expelled any citizens from Saudi Arabia and its regional allies.

On June 6, Trump weighed in on the dispute by posting the following message on Twitter:

“During my recent trip to the Middle East I stated that there can no longer be funding of Radical Ideology. Leaders pointed to Qatar—look!”

He swiftly followed up by another two tweets later that morning, which gave little ambiguity of his stance vis-à-vis Qatar:

“So good to see the Saudi Arabia visit with the King and 50 countries already paying off. They said they would take a hard line on funding extremism, and all reference was pointing to Qatar. Perhaps this will be the beginning of the end to the horror of terrorism!”

Three days later, on June 9, after Secretary of State Rex Tillerson called upon Saudi Arabia, the UAE and Bahrain to ease their blockade of Qatar, Trump contradicted his top diplomat by announcing hours later during a press conference at the White House that “the nation of Qatar, unfortunately, has historically been a funder of terrorism.”

Whatever intention Trump had vis-à-vis the GCC dispute, his tweets followed up by the June 9 press conference had a clear destabilizing impact. The reaction was perceived as Trump supporting the Saudis as well as a “green light” for a Saudi military invasion in order to depose Tamim and settle Riyadh’s long-standing grievances with Doha once and for all.

Moreover, the ultimatum—which required Doha to sever ties with Tehran—was widely perceived by Qatari officials as a trap. If Qatar did turn to Iran for diplomatic protection, Saudi Arabia would likely press the United States for further diplomatic pressure on Doha.

As part of an effort to shore up international support for Doha and to prevent Tehran from taking advantage of the crisis, Qatari Foreign Minister Mohammed bin Abdulrahman Al Thani visited all Western powers, including Russia and Turkey, but not Iran. Qatar also believes that Iran is the only beneficiary of the GCC crisis.

Qatar, however, did receive Iranian Deputy Foreign Minister for Arab and African Affairs Hossein Jaberi Ansari on June 18 in Doha. During the two-month long crisis, Qatar has received the foreign ministers of Germany, United Kingdom, France and the United States. On July 23–24, Recep Tayyip Erdogan became the first major international leader to visit Riyadh and Doha as part of an effort to defuse the crisis.

Doha’s interpretation of Trump’s Qatar tweets rests on the assumption that his messaging was based on allegations brought to him by Saudi Arabia and the UAE, and not from his intelligence agencies.

The Politics Of Al-Udeid Air Base

In an interview with the Christian Broadcast Network aired on July 12, Trump said, “We are going to have a good relationship with Qatar and not going to have a problem with the military base… If we ever had to leave, we'd have 10 countries willing to build us another one. And they'll pay for it. The days of us paying for things are largely over.”

However, as David Des Roches of National Defense University points out, “Al-Udeid is the largest overseas air base used by the United States and has two active runways capable of handling every aircraft in the U.S. inventory, together with robust fueling and ammunition storage facilities. In addition, the base also houses the forward headquarters of U.S. Special Operations Central Command (SOCCENT) and U.S. Air Forces Central Command (AFCENT) with their advanced command and control infrastructures. This complex has been built up considerably over 14 years, with much of the funding provided by Qatar.”

Since the establishment of the Al-Udeid Air Base in 2002, the U.S. government estimates that construction and maintenance costs totals $10 billion. Out of the $10 billion, Qatar has spent $9 billion. It is also widely understood that the U.S. Air Base was relocated to Qatar after Saudi Arabia ordered the U.S. to leave the Prince Sultan Air Base, which the United States had maintained since the Gulf War of 1991.

In addition to having paid the overwhelming majority of costs pertaining to Al-Udeid, the Qatari government has also given Washington an unfettered ability to operate and has apparently not denied a single U.S. operational request for the base since its inception.

Contributing to Doha’s mounting challenges in Washington was a conference hosted by the Foundation for the Defense of Democracies (FDD) in Washington on May 23 whose primary focus was to advocate for the U.S. withdrawal from the Al-Udeid Air Base.

This, along with an op-ed published by the UAE ambassador to Washington in the Wall Street Journal on June 12—three days after Trump’s public rebuke of Qatar—called for relocating the Al Udeid Air Base to the UAE.

Between Doha’s growing regional isolation and what Qatari officials believe is an orchestrated international campaign of smear, especially in Washington, triggered by a barrage of critical op-eds about its foreign policy and persistent allegations of Qatari support for terrorism in leading U.S. media outlets, coupled with the mixed messages from Trump and his top diplomat left the Qatari leadership at a state of panic: the leadership feared Qatar’s security environment could begin to resemble that of Kuwait prior to Saddam Hussein’s invasion.

Due to the fear of a Saudi miscalculation of U.S. policy intentions, just as Saddam Hussein had in 1990, coupled with what the Qatari leadership perceived as “the Iran trap,” the emir chose to ignore Tehran and instead dispatched Minister of State for Defense Khalid bin Mohammad al Attiyah to Washington. There, he signed a deal to buy as many as seventy-two F-15 fighters jets valued at as much as $21 billion.

Despite Trump’s public criticism of Qatar, the symbolism of the arms agreement signed by al- Attiyah and James Mattis underscored that the U.S.-Qatar strategic alliance remained intact despite problems. Mattis announced during the agreement signing, “I believe that (Qatar’s) Prince Thani inherited a difficult, very tough situation, and he’s trying to turn the society in the right direction.” While the agreement had been years in the making, its high-profile signing ceremony was expedited to send a clear message to the GCC of U.S. support for Qatar’s sovereignty and value as a key U.S. strategic ally.

Following al-Attiyah’s visit, he departed for Ankara on June 30 to meet the army chief of staff, his Turkish counterpart and Recep Tayyip Erdogan to secure Turkish diplomatic and military support. Earlier in June, Turkey's parliament ratified two deals on deploying troops to Qatar and training its army. While Qatar initially touted that 3,000 Turkish troops would be dispatched to the Gulf country, no more than 180 will eventually be sent. Washington remains Doha’s undisputed security guarantor as Turkish troops play a largely symbolic role, since Qatar also considers Turkey to be a critical ally against Iran.