The Rise of the Abe Doctrine 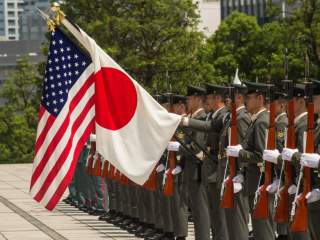 This year marks the sixty-fifth anniversary of the signing of the Security Treaty between the United States and Japan, the bilateral treaty that formalized the U.S.-Japan alliance. The alliance began largely as a Cold War expedient designed to transform postwar Japan into an anti-communist bulwark dependent on U.S. forward military presence for its security. Indeed, as the Korean War unfolded on Japan's doorstep at the time of signing, the future of the fledgling nation still preoccupied with potential communist-inspired domestic disturbances did not seem to be bright. In fact after Prime Minister Yoshida signed the document, successors like Prime Minister Kishi paid the ultimate political price for supporting the alliance, never recovering politically.

But thanks to Kiishi's grandson, Prime Minister Shinzo Abe, the U.S.-Japan alliance in 2016 is stronger than ever. While the role of domestic politics has not become any less important in either Washington or Tokyo, the focus has shifted in both countries. The U.S. is in the midst of the 2016 presidential elections, where candidates have largely ignored foreign policy beyond discussions of the Islamic State in Iraq and the Levant (ISIL). Alliances like the U.S.-Japan bilateral are inevitably being taken for granted rather than celebrated by Americans.

By contrast, Japan under Prime Minister Abe is growing ever more confident in the pairing, increasingly willing to implement a more proactive foreign policy and stretch the tradition bounds of this relationship. Addressing the joint-session of the Congress on April 29, 2015, Prime Minister Abe delivered his aptly titled speech, Toward an Alliance of Hope, conveying to the American people his lofty vision for strengthening the alliance for global peace and stability. Abe's confidence is widely supported by the Japanese public; in 2015, 82.9% considered the alliance as contributing to the country's national security, while 84.6% favored the maintenance of bilateral relations in the future.

Recent changes in Japan's foreign policy corroborate and re-enforce such optimism for the alliance. At the heart of these changes is the slow demise of postwar Japan's mercantilist realism, the Yoshida Doctrine. When its architect, former Prime Minister Shigeru Yoshida, signed the alliance treaty in 1951, he all but relegated Japan's own security burden to the United States in exchange for economic development. His formula immediately bore fruit, allowing Japan to become the second largest economy by the 1960s, yet it also left a legacy of severely restricting Japan's diplomatic flexibility—most recently resulting in the tragic execution of two Japanese nationals by ISIL in early 2015.

Abe's security reform has been so sweeping that it is increasingly being seen as the Yoshida Doctrine’s contemporary successor. According to Christopher Hughes of the University of Warwick, the “Abe Doctrine” promotes a "more assertive, high-profile, and high-risk foreign and security policy for Japan." Such ambitious foreign policy thinking has significantly strengthened the U.S.-Japan alliance. The 2015 revision of the Guidelines for U.S.-Japan Defense Cooperation eliminated the geographical limits on the scope of the alliance, allowing for global security cooperation between Washington and Tokyo. Moreover, Abe's signature initiative, Proactive Contribution to Peace, links defense and development, further expanding the areas of U.S.-Japan security cooperation.

The Abe Doctrine is welcomed in Washington as a long awaited catalyst for Japan's rise as a natural regional leader in global security affairs. Unlike America’s role in the world, wherein a rhetorically value-laden Western superpower inherited the legacy of European imperialism, Japan has been able to engage with many authoritarian and non-Western countries largely thanks to its pragmatic, economic-centric approach to foreign policy. Such foreign policy pragmatism has also allowed Abe to maintain channels with U.S. rivals, particularly Russia, despite the vicissitudes of events on the other side of the globe. As a result, Tokyo is increasingly nurturing its unique ability to "play good cop to Washington's bad cop," leading to potential mutual benefits to whoever becomes U.S. president starting in 2017.

Seen from Washington, the starting point for charting Abe's Japan in this trajectory would be Tokyo's increased involvement in global counterterrorism efforts by raising its commitment in the Combined Joint Task Force (CJTF) against ISIL. ISIL is a global threat; its existence a provides a casus belli, uniting bitter rivals together as in the recent U.S.-Russia cooperation for intelligence-sharing or Saudi Arabian efforts to unify the Sunni world even as tensions rise with Iran. Therefore, boosting Japan's stake in CJTF beyond only humanitarian support and elevating its partnership as a non-Western democracy with considerable economic resource would be conducive to greater Japanese global leadership.

Japan can readily leverage its own unique assets to this end. The Development Cooperation Charter allows Tokyo to export counterterrorism equipment to local militaries. Japan's defense industry boasts some of the most advanced technologies in the world, potentially enabling Middle Eastern countries such as Israel, Jordan and Turkey to dramatically improve their counterterrorism operations. In addition, Prime Minister Abe’s personal relations with some of the most distinctive personalities in the world that President Obama has struggled with (President Recep Tayyip Erdogan, Prime Minister Benjamin Netanyahu and even President Vladimir Putin) offers a trusted American interlocutor to keep channels of communication and cooperation open. And finally, as ISIL directly targets Asia—as it did in early January in Indonesia—Japan's close relations with its neighbors will be crucial to the global efforts to degrade and destroy radically linked groups throughout the region. Such a show of leadership by and increased responsibility for Tokyo will be an important complement to the U.S.-Japan alliance that is rapidly expanding in its scope.

In 1953, no less a figure than the legendary former U.S. ambassador to Japan, Edwin O. Reischauer, lamented the fragile foundation of the U.S.-Japan alliance: "During the twentieth century as a whole, no country has more consistently regarded itself as in essential conflict with the United States than has Japan, and no country has been more uniformly looked upon as a potential enemy by Americans, the burden of proof, perhaps, should rest on those who assume Japanese-American friendship, rather than those who expect the contrary." Indeed, Japan’s prime minister at the time, Shigeru Yoshida, quietly signed the controversial alliance treaty by himself at the Non-Commissioned Officers’ Club at Presidio of San Francisco for fear of domestic backlash.

Although Yoshida, an astute realist, viewed the treaty at the time as a "scrap of paper," the U.S.-Japan alliance has weathered the vicissitudes of the global security environment for the last sixty-five years remarkably well. It now functions as the cornerstone of peace and stability in Asia and increasingly around the globe. The Yoshida Doctrine is finally over, and it’s time to yield its coveted place to the Abe Doctrine—regardless of how long its namesake remains in office. Tokyo’s commitment to global security leadership should be welcomed as a positive contribution to addressing the world's tumult, especially terrorism. It also is an essential step in affirming the U.S.-Japan alliance as one of enduring global importance.

Joshua W. Walker, PhD (@drjwalk) is a Truman National Security Fellow, leads the Japan work at the German Marshall Fund of the United States and is the Founding Dean of the APCO Institute where Hidetoshi Azuma is an Adjunct Fellow and Master’s student studying Security Policy at George Washington University.