The Road Ahead for Dealing with North Korea 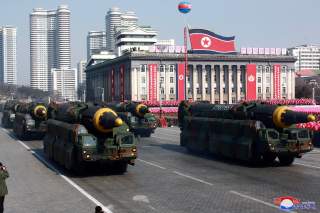 Today President Donald Trump created shock waves around the world by announcing America’s withdrawal from the proposed summit with North Korean Supreme Leader Kim Jong-un. Over the past week, relations between North Korea and the United States steadily cooled. On May 16, North Korean Ministry of Foreign Affairs First Vice-Minister Kim Kye-gwan warned,“If the U.S. is trying to drive us into a corner to force our unilateral nuclear disarmament, we will no longer be interested in such dialogue and cannot but reconsider our participation in the DPRK-US Summit.” Following this statement,  North Korean state-run newspapers resumed their barrage of insults aimed at America, proclaiming, “Our hearts burn with the blood of endless revenge toward the murderous U.S. imperialist and class enemy man-eaters who enjoy the slaughter of human beings.”

Previously, both sides had made statements and gestures that were widely taken as a sign of improving relations ahead of the anticipated summit, originally planned for June 12 in Singapore. Now, diplomats, regional powers, and analysts are all left wondering if the cycle of provocation has resumed and if U.S.-North Korean relations will return to their customary frostiness.

To assess the state of relations with North and South Korea, the Center for the National Interest convened a panel of experts, including, Dr. Kim Heung-Kyu, a visiting professor at Georgetown University and a member of the South Korean Presidential Security Council, Anthony Ruggiero, a senior fellow at the Foundation For the Defense of Democracies, Wallace C. Gregson, a former Assistant Secretary of Defense and the former Commander of U.S. Forces in the South Pacific.The meeting was moderated by Harry J. Kazianis, Director of Defense Studies at the Center for the National Interest and executive editor of the National Interest magazine.

When asked about how South Korean looked at the summit cancellation, Kim said, “Seoul, particularly President Moon Jae-in, got tremendous domestic costs.. there is the only option for Seoul to pursue to resolve this issue which is peaceful means, that is why they invested so much political costs… but now it turns out failure.” Kim elaborated that South Korea needed assurances that its interests would be taken into account by the United States and that Washington would understand that peaceful means were preferable over sanctions, which were in turn very preferable over the use of force on North Korea. The point of the upcoming Trump-Kim summit would have been to further reduce tensions and possibly remove some or all of Kim’s nuclear weapons. Now these goals are in doubt.

Ruggiero believes that more “maximum pressure” is needed on North Korea before a good deal can be reached. “Previously positive optics really hid serious substantive difference, the difference being denuclearization,” said Ruggiero, who is also an expert on sanctions. He believes that North Korea’s insistence on phased denuclearization was a nonstarter and that America should focus on quick and upfront complete, verifiable, and irreversible denuclearization. Because it looked like America wasn’t going to get that, Trump was right to abandon the summit:

Furthermore, Ruggiero argued that it was pressure that brought North Korea to the table and it is pressure that will bring them back. He also stated that America should still do a lot more with sanctions, including fining Chinese companies that violated United Security Council Resolutions that banned trade with North Korea. Additionally, he suggested that the U.S. should support countries in Southeast Asia that host North Korean labor to convince them that they can repatriate those workers, and so deprive Kim of hard cash, without facing significant security backlash from North Korea.

Gregson suggested that maximum pressure alone might not be enough, saying that “The basic nature of the North Korean regime is impossible to change without regime change.” He thinks Kim has no good reason to give up his nuclear weapons and that sanctions will only be effective if they’re powerful enough that they also risk regime change:

This means that Kim’s ultimate goal, other than conquering South Korea, is to be seen and accepted as a nuclear power. America wants his nuclear weapons gone, but Kim needs them to be secure against regime change. For Kim, any diplomacy serves only to make himself look good and to drag things out while he keeps his weapons.

That being said, Wallace also thought that the Trump-Kim summit was not necessarily a bad idea as both sides could have signed some document ending Korean War. In fact, he still thinks some summit or summit-lite meeting could happen: “Predictions of delay and cancellation might merely be negotiation ploys and political hype... Maybe our statements should be treated like wine- that they’re not any good until they age for a while.” Elaborating on this, Wallace speculated that Trump and Kim might end up meeting sometime in the near future anyway and sign some document that would let them claim domestic political victory.  At least for now, deterrence should hold and the death of the summit doesn’t have to result in anything catastrophic. The most likely outcome will simply be a return to the same old pattern of confrontation followed by an eventual future negotiation.

Trump can claim that Kim wasn’t going to play ball and Kim will claim that this was what America was going to do all along. As Dr. Kim explained during the panel, “Kim Jong-un already achieved most of his objectives even before we had the U.S. and North Korean summit. So his range of choices are much larger than Trump’s. So even though he failed to have a U.S.-North Korea summit, he can declare success.”

The Russian Ambassador to the United States, Anatoly Antonov, observed that while Russia supported U.S. diplomatic efforts and doesn’t support North Korean actions, it made sense that Kim would hold on to his weapons: “Why should North Korea give up nuclear capability? What is the price? What kind of assurances can they get that are politically or legally binding?” After all, as long as the positions on what constitutes denuclearization remain different in Washington and Pyongyang, no successful resolution would have been achievable at a summit anyway.

Paul Saunders, the Executive Director of the Center for the National Interest, voiced the concern that while sanctions could be tightened, pushing North Korea too hard might cause them to lash out militarily- similar to Imperial Japan’s decision to choose war in the face of American sanctions in 1941. Provoking such as response would defeat the purpose of the sanctions and the purpose of deterrence. America wants to slow or stop North Korea’s nuclear program but it doesn’t want to cause a war by accident as a result. Wallace summed this up by remarking,  “As Secretary of State George Shultz said, ‘There are problems to be solved and problems to be managed.’ North Korea ought to be managed.”

John Dale Grover is an assistant managing editor at the National Interest. Follow him on Twitter @JohnDaleGrover.