The Russia-Israel Relationship Is Perfect Realpolitik 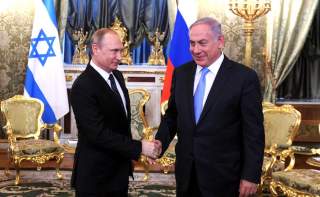 In world politics, the Middle East remains the region with the most serious security challenges. Observers agree that it is undergoing a stage of drastic changes that will define its future. Among the factors shaping the region, Israel’s foreign policy is traditionally of paramount importance, and Israeli-Russian relations are a significant element. While the West in general and the United States in particular try to balance different, foreign and domestic factors within their relations with Israel, Russian foreign policy, based on realist ideas of national interest, negotiations and bargaining, provides for strengthening cooperation with Israel wherever it is possible. Neither country tries to hide disagreements, but both are eager to work together where their interests coincide.

Benjamin Netanyahu’s two visits in recent weeks—one to the United States, another to Russia—could hardly be more different. The trip to Washington received vast media attention and commentary, while the talks in Moscow were met with just a few short official statements. The fact that it was the first meeting of the Israeli prime minister with the new American president only partially explains the difference. U.S.-Israeli relations are an item of American domestic politics. The same can be said about the relations of most Western countries with Israel—whether Germany, with its emotional attachment to Israel, or France, with its historically complicated Middle Eastern policy. One can hardly imagine that Benjamin Netanyahu’s trip to any Western country could be a routine political matter.

At the same time, the question stands whether the short (in Russian diplomatic terminology) working visit to Moscow can be of greater significance to Israeli foreign policy and the state of the Middle East than the meeting with Donald Trump, with all the media and public attention, and with the new administration’s policy towards the Middle East still unclear. During the last couple of decades, Western countries’ foreign policies have been rather idealistic. Western leaders and diplomats have designed and conducted policy considering a broad range of ideological criteria, determining cooperation with other countries by the level of their democratic development. However, even with such a simple definition, such an approach to foreign policy raises many questions, starting with “what is democratic?”

In the case of Israel, further complications arise. On the one hand, during the decades of the Cold War, Israel became an integral part of the Western political order. On the other hand, Israel’s absolutely unique history, the essence of Israeli statehood, and Israeli security interests in a hostile environment have provided for some domestic- and foreign-policy phenomena that various members of Western publics cannot accept—including Israel’s settlements policy. Then, when Western electoral politics kicks in, the West’s policy towards Israel must become more nuanced and, thus, to a certain degree less effective.

It should be emphasized that there is no harm in a country’s foreign policy taking into account public opinion. The challenge is to subordinate foreign policy to an ideology, especially to one implying or even demanding changes in the domestic politics of other sovereign countries. The Kremlin’s position obviates this challenge altogether—Russia’s foreign policy is about protecting national interests in interaction with other states and their interests. Its relations with Israel are arguably the best example.

At the core of all national interests is the provision of security. Russia and Israel have the same enemy—Islamic terrorism. Without “buts” and “ifs”: it is difficult to imagine that Israeli or Russian decisionmakers could ever construe, for example, Islamic extremists operating in Syria or elsewhere as “freedom fighters.” According to the Israeli prime minister, “One of the things that unites us is our common fight against radical Islamic terrorism. Substantial progress has been made over the last year in fighting radical Sunni Islamic terrorism led by ISIS and Al-Qaeda, and Russia has made a great contribution to this result and this progress.”

However, this security partnership is part of a broader network that links the two countries, including bilateral trade, tourism and numerous ties between their peoples. The last is especially important: there are a million Russian-speaking Israelis, and Russians are interested in Israel because of its historic, cultural and, especially, religious significance. (Russians are the second-largest group of tourists to Israel, second only to the number of visitors from the United States.) Especially important to the development of Israeli-Russian relations is the personal bond between President Putin and Prime Minister Netanyahu.

Despite all these ties, the foreign-policy differences between Russia and Israel are significant. The two major disagreements are the view of Iran and the Middle East peace process. During the open to the public part of the last week’s talks in Moscow, Prime Minister Netanyahu spoke of “an attempt” that “was made to destroy the Jewish people 2,500 years ago” in ancient Persia. He continued: “Today, ancient Persia’s successor, Iran, continues attempts to destroy the Jewish state.” President Putin reacted in a very conciliatory way, noting that those events happened in the fifth century BCE, and suggesting, “We now live in a different world. Let us talk about that now.” Here, one can find a very short summary of current Russian foreign policy—the uniquely complex modern world is what matters; let’s talk.

Prime Minister Netanyahu is understandably concerned about Iran; however, he seems to comprehend the pragmatic and, in many regards, limited cooperation that exists between Tehran and Moscow. In any case, this cooperation does not prevent the development of Israeli-Russian relations. Similarly, Russia continues the Soviet policy of supporting the Palestinians within the Middle East peace process. There are many reasons for that, and Israel’s attempts to stop this support would be mostly an enormous waste of time and diplomatic resources. However, Russia’s position on the Middle East peace process is no reason for Israel to stop cooperating with Moscow, especially when it is successful.

This ability to compartmentalize foreign-policy issues is one of the hallmarks of Israeli and Russian diplomacy. In the modern, globalized, interconnected world there is not much sense in a position of “all or nothing” or zero-sum games. In case of Russia, deal making abroad is easier because of the effective absence of foreign political lobbies like those that exist in the West. At the same time, Moscow does not limit itself by ideological slogans aimed against other countries and their domestic affairs. Now, with the Russian stance in the Middle East strengthened as a result of Russian military and diplomatic policy towards Syria, Israel can also secure its regional position by advancing in cooperation with Russia. It certainly appears that Israel is exercising this option as much as possible. For Russia, whatever its relations with the West, the Arab world, or Iran, Israel is a strong partner on many issues.