The Salman Doctrine: the Saudi Reply to Obama's Weakness 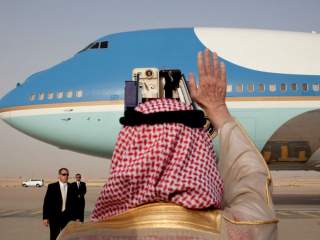 Following a thorough explication of Obama’s foreign policy doctrine in a recent Jeffrey Goldberg article, it is now clearer than ever that America and Saudi Arabia are on a collision course over strategic decisions in the Middle East. This is because the “Obama Doctrine” is diametrically opposed to the emerging “Salman Doctrine,” which the Kingdom is developing in order to restore peace and a modicum of stability to the region. And while the Saudis and their allies would benefit immensely from having the United States at their side, Washington also has much to lose by distancing itself from the Saudi agenda. Since the end of World War II, American influence and standing in the Arab world has, to a large extent, been dependent on the “special relationship" with the Kingdom.

President Obama expressed this doctrine on his first campaign trail when he said that “the United States cannot use its military to solve humanitarian problems.” This explains his decisions to refrain from taking out Assad after Syria crossed his “red line” by using chemical weapons on its people, to capitulate to Iran’s regional ambitions to strike the nuclear deal, to allow the development of Shia militias in Iraq, to avoid pressing Israel on the Palestinian issue and to initially go easy on ISIS because it is “not an existential threat to the United States.” Yet, as the Goldberg article makes clear, the Obama Doctrine not only represents the president’s extreme hesitation toward American military intervention, but also evinces his specific abandonment of the Arab world and his now declared support for a more powerful Iran.

The best way to demonstrate the complete opposite worldview of the Obama doctrine is to look at the Salman Doctrine. The Saudi leadership believes that Assad must be removed from Syria; that Iran’s regional and nuclear ambitions must be denied; that the Shia militias of Iraq, Syria, Lebanon and Yemen are terrorist groups and must be destroyed; that the world needs to recognize a Palestinian state; and every global effort must be made to defeat ISIS and Al Qaeda. At the center of many of these doctrinal differences is the Saudi assertion that Iran is at the root of numerous security problems now plaguing the Middle East. Obama’s assertion that Saudi Arabia should “share” the region with Iran is patently absurd, given Tehran’s vast and unending support for terrorism.

There are three elements one must understand about the Salman Doctrine: it has not spontaneously appeared, it is based on a solid assessment of history and it is bringing about significant real world changes. First, the Salman Doctrine has emerged from strategic necessity, following the increasing withdrawal of American leadership from the region as a result of the Obama Doctrine. Second, just as President Obama’s views are steeped in American history, King Salman’s views are steeped in Arab history, and he has no intention of allowing Iran, which seeks to give its minority Shia sect the upper hand in worldwide Islam, to disrupt 1,400 years of majority Sunni domination. Finally, the Salman Doctrine is backed up by extensive, transformational developments in Saudi Arabia’s military, public policy and Arab alliance system. Indeed, when one looks closely at what the Saudis and their allies are doing in order to push back against the region’s chaos, mostly supported by Iran, one can see that the Obama Doctrine is cutting America out of a major growing multinational coalition of like-minded states taking shape in the Islamic world.

The Saudi military expansion that took place over the past five years is unprecedented. The Kingdom has already committed over $150 billion to an enhanced defense posture; this will increase by about $100 billion over the next five years. The Saudi military and its allied forces are seeing more frequent action in the region, as evidenced by its deployment into Bahrain in 2011 and the current war in Yemen to fight Iranian proxies. Further, the air forces of Saudi Arabia and certain of its Arab allies are part of the anti-ISIS coalition in Syria, and these efforts could be extended to Iraq in the near future.

The Kingdom recently announced a thirty-four-nation Islamic coalition against terror. Among the main allied states are Pakistan, Egypt, Turkey, Malaysia and Nigeria. This coalition just completed major military exercises, called Northern Thunder, around the Saudi military city of Hafr al-Batin, in which 150,000 troops from twenty Islamic countries practiced possible battle scenarios. While the coalition certainly has its sights set on ISIS and Al Qaeda, it is also training for potential incursions into Iraq and Syria in order to take on the Shia militias that have been growing there. These Iran-sponsored terrorist groups, which have substantial arsenals and about seventy-five thousand mostly irregular fighters, have for far too long been ignored by the Obama administration, although they are an emerging major regional threat. It is now only a matter of time before this new Saudi-led alliance will be forced to begin military operations against them inside Syrian and Iraqi territory.

The so-called Arab Spring, which caught the Obama administration off guard, but to which it gave its tacit support, has turned into an absolute disaster. In its wake, the Obama Doctrine has ushered in an era of noninvolvement in the Middle East on the part of the American military. This policy has led to increased chaos and bloodshed. To fill this deadly vacuum, the Saudis and their allies have had to step up in order to attempt to bring order to an area suffering from the scourges of failing states, ISIS and various Iranian proxies.

However, President Obama's tenure is nearly over. Hopefully the new administration will take a more realistic, positive approach toward America’s critical role in preserving stability in the world’s most strategically important region.