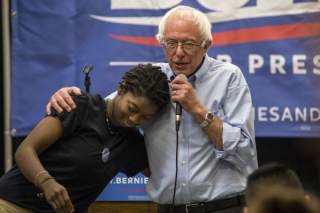 Last night in Philadelphia, a fault line threatened to crack down the center of the Democratic National Convention. Hacked emails released to the public confirmed that Debbie Wasserman Schultz’s Democratic Party was biased against Bernie Sanders during the primary, even going so far as to question his personal faith. And that was just the surface of this trove. Dig deeper and you found some tawdry stuff: plans to give sinecures to wealthy supporters, big donors soliciting access to Democratic politicians, attempts to manipulate news coverage on MSNBC (that last one probably wasn’t too hard).

This is everything Sanders has been protesting against: a thousand red capes waved in front of the populist bull. Democrats tried to appease the Sandernistas by offering them the head of DNC chairwoman Debbie Wasserman Schultz, who was promptly forced to resign, kicked out of the convention, and defunded of money to fight off her primary opponent in Florida (and they say Republicans shoot their liabilities behind the woodshed!). But it wasn’t enough. Sulfurous Sanders supporters stormed the streets of Philadelphia and even echoed Republicans by chanting “Lock her up!” For much of yesterday afternoon, it looked like the DNC was about to make last week’s RNC look like a perfectly choreographed pep rally.

And then the convention was gaveled to order. Pro-Sanders delegates remained unsettled, waving around anti-TPP signs and causing occasional disruptions, but the robust program managed to bridge the divide. Sympathetic speakers, from a woman with cerebral palsy to the first openly gay NBA player, helped iron out the wrinkles, and when pop star Demi Lovato, who’s struggled with mental health issues, sang her hit single “Confident” (very well, I might add), centrists and progressives alike boogied along. Michelle Obama offered further balm to Democratic elites by tackling head-on Hillary’s 2008 loss to her husband, and emphasizing that she and Barack were now With Her.

Then came Sanders himself. His fans were ecstatic, forcing him to declare “it’s an hawnah” several times before they finally screamed themselves hoarse. They waved placards bearing Sanders’ name that had been furbished by the DNC—an unusual honor for a primary opponent that’s usually reserved for the top-of-the-ticket champions. The camera didn’t immediately cut to Bill Clinton standing in his owner’s box looking like a human tea kettle, but imagining it required no effort.

Sanders gave a good speech, with the usual promises of free healthcare, free college, and free reductions in the earth’s surface temperature. But as the cameras swooped in to show the Bernie bloc, young with dyed hair, many on the brink of tears, they seemed at once to be separate from the rest of the convention, a distinct group who didn’t share nearly enough space on the Venn diagram with the Clinton delegates. “That revolution, our revolution, continues,” Sanders declared at one point, even as he was trying to fold his revolutionaries into the most machine-produced Democratic campaign of my lifetime. They didn’t resist, at least not visibly, but the differences between them and Her seem almost impossible to resolve.

How do you synchronize Bernie’s call last night for “a government which represents all of us and not just the 1 percent” with Hillary Clinton who moves almost exclusively in 1 percent circles? How do you synthesize his assault on Wall Street’s “recklessness and illegal behavior” with Clinton rolling in donations from big finance and netting a quarter of a million dollars for speaking at a Goldman Sachs conference? How do you jive his demand to “end the movement toward oligarchy” with the oligarchy’s most visible charter member? Who heard his call to “invest in education and jobs for our young people, not more jails or incarceration” and didn’t think of Bill Clinton’s anti-crime policies?

Mainstream Democrats were rapturous over Sanders this morning, perhaps hearing the applause that greeted his endorsement of Clinton and concluding the whole thing was finally over. But remember, the most emblazoned political line this year runs not between right and left, but Washington and everyone else—between Clinton and Sanders, in other words. Last night, Sanders demonstrated that his followers are the future of the Democratic Party, and while they might begrudgingly accept Clinton for now, there’s no guarantee it will last, especially if she’s elected and necessarily starts selling them out. This is at best a shaky armistice. If Democrats are fortunate, it will last the week.

Matt Purple is the Deputy Politics Editor for Rare.