The Saudi-Qatar Crisis Amounts to a Big Win for Iran 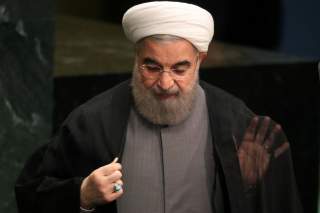 Iran has won another round in the Saudi-Iran cold war that currently dominates the political landscape in the Middle East. This outcome is largely the result of Saudi Arabia’s own folly. Riyadh forced Qatar into a diplomatic corner believing that Doha, in response to the quarantine imposed upon it by Saudi Arabia and its Gulf allies, will come running back to big brother hat in hand. This supposition was based on the understanding that tiny Qatar was so dependent upon its larger neighbor for trade, air traffic, foodstuff and other goods that it would not be able to withstand Saudi economic and travel embargoes. What has happened is exactly the opposite.

Qatar forcefully rejected all Saudi demands, including closing down Al Jazeera and, above all, curtailing relations with Iran, with whom it shares the world’s largest reservoir of natural gas. Qatar was able to do so for two major reasons. First, Iran and, somewhat surprisingly, Turkey, which was on good terms with Saudi Arabia, quickly helped Qatar overcome the sanctions by breaking the quarantine and shipping and airlifting supplies to the tiny emirate.

Second, Saudi Arabia failed to take into account the value attached by Washington to America-Qatar relations, based principally on the fact that the largest U.S. airbase in the region is located in Qatar and is deemed essential by the Pentagon for air operations both in Afghanistan and Syria. Despite President Trump’s anti-Qatar remarks, uttered in total ignorance of Qatar’s strategic value to the United States, the State Department’s response in public and private was very different. Riyadh realized that any threat of force against Qatar would face American opposition and damage the larger goals of its strategic partnership in the Persian Gulf with Washington.

Protected by these two factors, Qatar could thumb its nose at the Saudis. Qatar has now done exactly that with gusto. On August 23, Qatar announced its decision to “strengthen bilateral relations with the Islamic Republic of Iran in all fields” and return its ambassador to Tehran following a telephone conversation between the Qatari and Iranian foreign ministers. This is a remarkable victory for Iran and a major breakthrough in its attempt to normalize relations with members of the GCC, which Saudi Arabia dominates by sheer size.

What is equally important is that this formal rapprochement between Iran and Qatar is likely to have significant implications on the Syrian front. Iran and Qatar had been ranged on opposite sides of the Syrian conflict so far, with Iran supporting President Bashar al-Assad, and Qatar, like Saudi Arabia and Turkey, supporting a motley crew of opposition forces increasingly dominated by Sunni extremists. Qatar, now preoccupied with its quarrel with Saudi Arabia, in which it has Iran’s support, is likely to downgrade its involvement in Syria and reduce, if not stop, funding anti-Assad forces.

What is also important is that Iran’s rapprochement with Qatar comes on the heels of Tehran’s improved relations with Turkey. Saudi Arabia’s ill-considered moves against Qatar has also contributed to the rapprochement between Ankara and Tehran. Turkey has major stakes in Qatar. It is setting up a military base in Qatar as part of its power projection plan in the Middle East. Moreover, the emir of Qatar and President Erdogan of Turkey are on close terms and it has been reported that the former sent a 150-strong contingent of elite Qatari troops to protect Erdogan in the wake of the attempted coup against the latter in July 2016.

Now it is Turkey’s turn to reciprocate the favor and the Turkish Parliament has authorized the deployment of three thousand to five thousand Turkish troops to Qatar to help the emir maintain “internal security.” Turkey has thus decisively broken with Saudi Arabia and lined up with Iran on the Qatar issue, despite their differences over Syria.

Both Ankara and Tehran have been working to reduce these differences as well, and Ankara seems to be making all the concessions. It has accepted the reality that Assad, who is supported by Iran, cannot be removed by force. The shift in Turkish policy, in the making for a year, was announced publicly on August 20 by the Turkish prime minister, who declared that Turkey is willing to “settle the crisis with the involvement of all the key players, including Syrian President Bashar al-Assad.”

This is a major victory for Iran. Tehran is resolute in its support for Assad and continues the deployment of its ally Hezbollah, as well some elements of its elite Quds Force. Saudi Arabia, as a result of its miscalculations—based more on hubris than anything else—has paved the way for the latest Iranian diplomatic victories. Tehran’s deft diplomacy and infinite patience have finally begun to pay dividends. Shia Iran’s simultaneous rapprochement with Qatar and Turkey—both predominantly Sunni countries—has also begun to bust the myth that the struggle in the Middle East is based on the 1,400-year-old Sunni-Shia rift. Given that the large majority in the Arab world is Sunni, this was a major weapon in the Saudi propaganda armory. It is being increasingly discredited as it becomes clear that it is the reason of state and pure power politics and not age-old sectarian animosities that are driving the rivalry between Saudi Arabia and Iran.