The Saudi-UAE Alliance Could Be Weaker Than It Appears 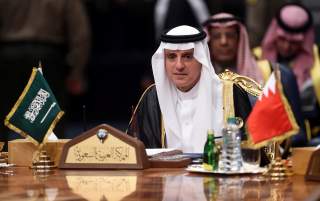 On December 5, the United Arab Emirates (UAE) Foreign Ministry announced the creation of a joint cooperation and coordination committee with Saudi Arabia. This committee provides an official forum for Saudi Arabia–UAE security collaboration outside the auspices of the Gulf Cooperation Council (GCC). Immediately after the UAE’s statement, many Western and Arab analysts described the committee’s creation as a major escalation of the Qatar crisis and a critical step towards a strengthened Riyadh–Abu Dhabi alliance.

Even though Saudi Arabia and the United Arab Emirates have many common strategic interests, a closer examination of geopolitical dynamics within the GCC reveals that the Riyadh–Abu Dhabi alliance could be weaker than it appears. The potential for tension between Saudi Arabia and the UAE is illustrated by an increasing number of foreign policy disagreements between the two countries. Over the past several months, Saudi Arabia and the UAE have backed rival proxy forces in Yemen, and adopted contradictory approaches to resolving the Syrian civil war.

The growing contrast between Saudi Arabia and the UAE’s approaches to handling regional crises suggests that a future escalation of Riyadh–Abu Dhabi tensions is likely, and could be harder to resolve than the Riyadh-Doha standoff. The difficulty in ameliorating a rift between Saudi Arabia and the UAE can be explained by the nature of the disagreements between the two countries.

Saudi Arabia’s foreign policy vision is premised on a sectarian understanding of conflicts in the Middle East. Riyadh’s international conduct is overtly driven by its Sunni identity, rendering pro-Iran Shia forces as hostile antagonists that should be repressed at all costs. To undercut Iran, the Saudi monarchy has provided financial and military support to Sunni Islamist movements in conflict zones, and promoted the spread of its Wahhabi ideology as a bulwark against Iranian influence in the Middle East.

The UAE’s foreign policy vision rejects Saudi Arabia’s sectarian approach to regional conflicts. In contrast to Riyadh’s tolerance of Islamist movements, Abu Dhabi has stridently defended secularism in the Middle East, and worked to facilitate the creation of nonideological coalitions in conflict zones. As Neill Quilliam, a GCC expert at Chatham House, recently noted during a panel discussion at the University of Oxford, Emirati policymakers view Islamic extremist groups as more threatening to regional stability than Iran. This conclusion is based on the UAE’s argument that Islamist networks appeal to a transnational ideology that resists political compromise.

The UAE’s evaluations of threat perceptions differ markedly from those held by Saudi Arabia and have caused Emirati policymakers to adopt a more nuanced approach towards Iran than their Saudi counterparts. Therefore, the UAE supports pro-Iran Shia factions that promote political stability and rejects Iran’s destabilizing interventions in the domestic affairs of Middle East states.

The clash between the UAE’s prosecularist agenda and Saudi Arabia’s pro-Sunni policies has revealed itself in both countries’ increasingly divergent approaches to resolving the crisis in Yemen and Syria. The conflict between Saudi and Emirati approaches to Yemen has revolved around disagreements between both countries on the threat posed by Shia actors, and the political legitimacy of religious extremist groups.

Saudi Arabia’s sectarian approach to the Middle East regional system has caused Riyadh to view the rise of a Shia government in Yemen, possessing cordial relations with Iran, as a direct threat to its national security. Saudi Arabia’s preoccupation with border security threats emanating from Iran-backed Shias in Yemen has been apparent in its approach to the GCC military intervention in Yemen.

The Saudi military has carried out aerial bombings in Yemen to strengthen the strategic position of exiled Sunni Muslim president Abd Rabbuh Mansur Hadi, and has cautiously deployed troops to defend Saudi Arabia’s borders against aggression from Yemeni Shia militias. Saudi Arabia also believes that Yemen’s Muslim Brotherhood-linked party, Al-Islah, is a legitimate political actor. Even though al-Islah has received financial support from Qatar, Saudi Arabia has continued to host senior members of al-Islah in Riyadh. The Saudi military has cooperated with al-Islah in military campaigns against Yemen’s Shia Houthi rebels.

The UAE does not share Saudi Arabia’s view that a Shia-backed government in Yemen is an automatic security threat. Instead of targeting Shia militias indiscriminately, Abu Dhabi has focused its military operations in Yemen on limiting the influence of Shia and Sunni Islamist groups. The UAE has cooperated with Saudi Arabia’s air strikes against the Houthis by deploying ground forces in southern Yemen, but it also backed Shia former Yemeni president Ali Abdullah Saleh’s military operations against al-Islah.

The UAE’s willingness to use force against Saudi-aligned al-Islah militias in Yemen underscores the UAE’s commitment to supporting secular forces in Yemen, regardless of their sectarian affiliation. During the summer, the UAE capitalized on the rift between Saleh and Houthi forces by becoming Saleh’s leading international supporter. The UAE justified its alliance with Saleh by arguing that Saleh’s return to power in Yemen would restore secular authoritarian stability to the war-torn country.

As Saleh’s death has plunged Yemen’s political future into even greater uncertainty by leaving a power vacuum amongst moderate Shia forces, the UAE will likely throw its support behind a new moderate leader seeking an inclusive political solution to the Yemen conflict. If Saudi Arabia uses the assassination of Saleh by Houthi militants to legitimize an indiscriminate aerial bombardment against militant Shias in Yemen, the rift between the UAE’s pragmatism and Saudi Arabia’s sectarianism could become more intense in the months to come.

Even though the GCC’s military involvement in Syria is significantly less extensive than it is in Yemen, both Saudi Arabia and the UAE have openly espoused different visions of Syria’s political future. Since the start of the Syrian civil war in 2011, Saudi Arabia has provided military support for Sunni opposition factions seeking to oust Syria’s Iran-backed Alawite Shia president Bashar al-Assad.

Even though prospects of a swift overthrow of Assad in Syria have receded considerably over the past year, Saudi Arabia has continued to harbor leaders of hardline Sunni opposition factions in Syria that refuse to hold diplomatic negotiations with Assad regime officials. These actions suggest that containing Iranian influence in Syria is the primary goal of Saudi policy in Syria. This objective continues to guide Saudi Arabia’s military efforts in Syria, even though it has become increasingly clear that Riyadh’s support for militant opposition groups might derail a peace settlement that could restore stability to Syria.

Even though the UAE has also provided military support for Sunni opposition groups in Syria, Abu Dhabi’s commitment to regime change in Syria has been more tepid than Saudi Arabia’s. The UAE’s focus on restoring stability to Syria under the leadership of a secular authoritarian regime is exemplified by its back-channel negotiations with Assad regime officials during the early stages of the Syrian conflict and cooperative attitude towards Russia’s arbitration efforts in Syria.

The UAE’s approach towards the Syrian conflict suggests that Abu Dhabi could support a Syrian peace settlement that keeps Assad in power, while providing representation for moderate Sunni opposition and Kurdish forces. The UAE’s willingness to compromise with Iran-aligned actors and unilaterally use military force to counter Sunni Islamist movements in Syria, underscores its desire to counter Saudi Arabia’s traditional hegemony over GCC efforts to resolve regional conflicts.

While the ongoing standoff between Saudi Arabia and Qatar remains the most imminent threat to the GCC’s survival as a collective security organization, the growing chasm between Saudi Arabia’s pro-Sunni and the UAE’s prosecularist foreign policy visions ensures that a Riyadh–Abu Dhabi proxy conflict could ultimately pose an even greater risk to the GCC’s cohesion. Therefore, Western and Arab diplomats seeking to resolve the Qatar crisis should take into account divergent interests between Saudi Arabia and the UAE, to prevent the GCC alliance bloc from unraveling in the years to come.

Samuel Ramani is a DPhil candidate in International Relations at St. Antony’s College, University of Oxford. He is also a journalist who contributes regularly to the Washington Post and the Diplomat. He can be followed on Twitter and on Facebook.