The Secret to Donald Trump's Massive Rise in the Polls 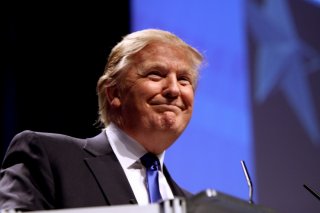 The punditry’s reaction to Donald Trump’s presidential campaign has come in three phases.

The first was annoyed indifference, accompanied by invocations of the Manny Ramirez Defense that this was “just Trump being Trump.” Most assumed the mouthy magnate was looking for a boutique issue to exploit so he could make a brief publicity splash and get out of the race, like he did with President Obama’s birth certificate in 2011. Responses were either blisteringly vitriolic or casually dismissive.

The second was anguished alarm, as Trump’s poll numbers surged and it became apparent that his candidacy was no hour-long reality show. Suddenly the Republican frontrunner was a former liberal Democrat whose chief conservative qualification was a tendency to spout politically incorrect platitudes. But how could someone so vacuous win the nomination? How could cheap insults substitute for policy? These questions occupied the commentariat for weeks, particularly after Trump’s spectacularly substance-free debate performance earlier this month.

Now we’re transitioning to phase three: recognition that Trump isn’t just a mouth tethered to an ego, but a candidate with at least a vague semblance of a plan. Trump’s blueprint for immigration reform, released last weekend, is a mishmash of good ideas (bringing sanctuary cities in line with federal law), bad ideas (implementing e-verify nationwide) and whimsical ideas (forcing Mexico to pay for a border wall), but it’s far more filling than Trump’s usual verbal sizzle. In fact, it may be the most comprehensive immigration plan ever released in presidential politics, where nebulous pledges to “secure the border” are the norm.

The debut of Donald Trump as a serious candidate has created disquiet among Republicans, especially as it brings with it another realization: Trump has tapped into something genuine in the American zeitgeist. It’s what Rick Santorum calls “blue-collar conservatism,” and Trump is a far more effective champion of it than Santorum. “I think it’s wrong for American business to move their business out of the United States to keep from paying taxes, but keep us as a marketplace,” former autoworker Gerald Woodruff told Dave Weigel in Flint, Michigan. “It’s wrong when they can buy furniture in China and ship it here cheaper than it costs us to build it here,” agreed Holly Gaul. Both are impressed by Trump’s campaign.

Trump’s blend of policies, his bucking traditional conservative notions on trade and tariffs while spewing venom at illegal immigrants, is more commonly heard in the union hall than the Republican National Committee building. Yet many conservative bloggers and radio hosts are nodding along. Some of this is a continuation of the populist right’s Hundred Years’ War against the Republican establishment, in which Trump is currently the most visible general. But there are also signs that some conservatives, frustrated by the torpidity of the economic recovery and contemptuous of big business’ influence over the GOP, are taking a second look at economic protectionism. Radio host Laura Ingraham recently tweeted: “‘Free trade’ is tantamount to a religion for some—bow down at the altar or face the ultimate punishment by the Masters of the Universe.” Given how controversial President Obama’s trade deal was on the right, many conservatives seem to agree.

It’s worth pointing out that much of this is founded on misconceptions. As Kevin Williamson and many others have argued, automation and predatory labor unions are far more responsible for job losses in Flint than free-trade agreements, and while America does run a large trade deficit, this is primarily because we import so much oil.

There’s also the matter of Donald Trump’s unique lack of fitness as a blue-collar spokesman. This is the man who hired illegal immigrants to build Trump Tower, allows his resort in Florida to import foreign cooks and cleaners and bullied tenants who stood in the way of his gaudy New York construction projects. His sudden concern for the everyman is, like every other project to which Donald Trump has attached his name, another vainglorious monument to Donald Trump.

But that doesn’t mean Trump’s disciples are as deluded as he is. There is some evidence that illegal immigrants reduce wages for native-born workers and take jobs. More broadly, whenever an economy transitions, as ours has from manufacturing to services, inevitably some are going to be left behind. Those near-retirees ruefully searching for answers in the crumbling houses and overgrown yards of Flint are not going to be mollified by libertarians hectoring them to “read an economics book.” Hayek was right about plenty, but his ghost isn’t going to pry the boards off those factories.

It’s a problem that’s manifesting itself politically across the world. In Britain, the United Kingdom Independence Party has become competitive in the Labour-dominated post-industrial North on a message of reducing immigration. In France, the populist National Front has been gaining traction over immigration concerns. Migration is perhaps the number-one issue arousing tensions against the European Union. And Australia’s immigration laws, already some of the tightest in the first world, were successfully enhanced earlier this year by Prime Minister Tony Abbott.

Donald Trump is a deeply ridiculous individual and his presidency would be the stuff of nightmares. But it’s important to understand that he’s offering more than just umpteen violations of political correctness. Behind the verbal waterfall is something that genuinely appeals to one of America’s most forgotten demographics.

Matt Purple is the Deputy Editor for Rare Politics. Before, he was the assistant managing editor of the American Spectator. His work has appeared in National Review, The National Interest, The Washington Times, The Daily Caller and Townhall.com. He lives in Washington, D.C. Follow him onTwitter@MattPurple.