The "Secret Sauce" of American Greatness 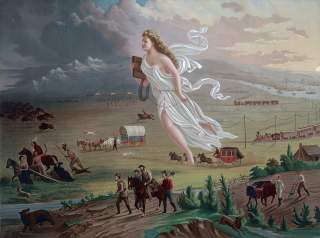 TOWARD THE end of his thought-provoking examination of Woodrow Wilson’s enduring but contested foreign-policy legacy, the Tufts scholar Tony Smith describes the politics of 2016 by using the analytical metaphor of a “vicious diamond,” in which the interaction of the “flaws in democratic governance in the common interest, questions about international economic integration and collective security, and debates over the role of American leadership in world affairs” conspire together under intense heat and high pressure to bring a “downward spiral in them all.”

Reading these words with Donald Trump as president, with the prospect of America’s tailspin only getting worse, this assessment seems all too true. So as we sift through the wreckage of punditry, polls and principles left in the wake of last year’s election and Trump’s tumultuous assumption of power in the White House, it is important to understand not just what happened, but the implications for America in the world moving forward.

The drama of our era will produce a mountain of books, but two that warrant immediate consideration are Smith’s Why Wilson Matters and Robert Kaplan’s Earning the Rockies. Although written before the 2016 election, both volumes provide a unique window into our troubled time. And while very different in approach and perspective—Smith comes from the academic left and is rooted in social-science theory, while Kaplan offers a more personal meditation, drawing on history, travel and geography—both books offer valuable insight into the recent history of U.S. foreign policy, and what it means for the future.

Smith’s approach is more conventional. As one of the leading scholars of Woodrow Wilson, he seeks to resurrect the legacy of the twenty-eighth president from what he claims are the distortions promoted by neoliberals and neoconservatives—those on the left and right that have essentially hijacked Wilson’s ideas to justify military adventurism. By making the case for what he calls “classic” Wilsonianism, Smith offers a concise historical review of Wilson’s concept of democratic change abroad and America’s role in bringing that about. It’s a reminder that Wilson’s legacy is far more complicated than today’s debates suggest.

But Smith has higher aims. He wants to reclaim Wilson’s historical memory to bolster the very idea of liberal internationalism, which he correctly considers under assault. For Smith, the problem is not that the United States stands for liberal values and seeks to promote democracy abroad; for too many, doing so has become synonymous with military force and overthrowing governments. The association of Wilson’s precepts with the recent wars in Iraq, Afghanistan and Libya has caused many to question the wisdom of a vigorous American role in the world. The result, Smith argues, is that “neo-Wilsonianism sabotaged the very tradition from which it had emerged.”

Smith does not deny Wilson’s idealism, nor does he suggest that America shirk its responsibility to promote its values. The question is how. By reviewing Wilson’s academic writings as well as his policies in the White House, Smith paints a portrait of a more careful and prudent Wilsonianism, one that believes in American power, but is more restrained in its use. It is not for the United States to “liberate” others, Smith writes, but to help create the conditions for allowing democratic change to unfurl. He argues that the core difference between original Wilsonianism and its “neo” successor is that the “former predicated the likelihood of democratic transition on the character of the people under consideration; the latter made success a matter of Washington’s determination.”

Smith is at his best when describing the historical foundations of Wilsonianism. But he is less convincing as he seeks to explain how this applies to current foreign-policy decisions, and the book’s second half loses steam. His description of the George W. Bush years reprises many of the somewhat tired arguments about neoconservatives without shedding much new light on these debates. If anything, I believe he overstates the role that neocons played in shaping Bush’s foreign policy.

His description of Barack Obama’s foreign policy suffers from several flaws as well. Smith is right that Obama is a liberal internationalist, but he struggles to explain why Obama pursued more “imperialist” policies in places like Afghanistan and Libya once in office, only then to become more “realist” by pursuing a restrained approach in Syria. Smith grossly overstates the role that neo-Wilsonian thinkers had in shaping a less-experienced Obama when he came to Washington in 2005. He asserts, for example, that the young Illinois senator was influenced by centrist groups like the Progressive Policy Institute. I know of no evidence that he paid any attention to them.

Smith explains the sudden shift in Obama’s thinking by recounting the infamous red-line episode in Syria in 2013, when he supposedly defied his neo-Wilsonian advisers by pulling back from the use of force to eliminate most of Syria’s massive chemical-weapons stockpile to pursue a diplomatic deal with Russia to eliminate nearly all of it. This was less a change of heart, as Smith claims, than a reflection of the cold pragmatism that was at the core of Obama’s approach to the world.

Smith correctly observes that Obama has not left behind a single doctrine for his predecessors to follow. Don’t expect Obamaism to replace Wilsonianism. As I’ve argued in these pages before, he has left a clear “checklist” to serve as a practical guide for the use of American power abroad. Unfortunately, his successor is operating from a very different rulebook—one rooted not in liberal internationalism, but populist nationalism.

TO HELP understand this ominous shift, I can think of no better companion than Kaplan’s terrific Earning the Rockies. In fewer than two hundred pages—and, mercifully, no academic jargon—Kaplan shines a bright light on the sense of grievance and anxiety that has fueled insurgents on the left (from Occupy Wall Street to Bernie Sanders) and the right (from the Tea Party to Trump). Like his previous four books, Kaplan uses geography as a lens. He explores how America’s geographic landscape has shaped its ideas, history and unique sense of the world (full disclosure: Kaplan is a friend and former colleague). Although some may dismiss this as old fashioned—Kaplan anchors his work by reintroducing us to near-forgotten scholars like Bernard DeVoto—this book is proof of the power of close observation and an argument for putting down our iPhones and simply getting outside to see what is around us.

Recounting his road trip from coast-to-coast, Kaplan’s book is brimming with revealing details and finely drawn portraits, from the evolution of New Jersey Turnpike rest stops to Rust Belt cafes and lonely Great plains roads. Like George Packer’s The Unwinding and J. D. Vance’s Hillbilly Elegy, Kaplan reflects on the two Americas: the increasingly desperate, devastated “vast alternative universe” of those who feel alienated from their own country and left behind by globalization; and the cosmopolitan, economically thriving, globally connected America that resides mainly in its cities and university towns. What makes his book unique is that it connects these landscapes with the past and present debates about American foreign policy.

Kaplan sees in America’s geography the duality that is at the core of its approach to global affairs: the sense of distance and isolation, especially from the perspective of its vast interior spaces; and its connection to the world and beneficial strategic position that makes the United States “fated” to lead. This is also why the United States is simultaneously seen as a refuge (think Ellis Island) and a great power built on conquest (the pioneers). Drawing on the work of Frederick Jackson Turner, another dusty historian, Kaplan reminds us that the conquering of the frontier and the settling of the West was a key source of American dynamism and innovation. “New land creates wider opportunities,” he writes, “which, in turn, break down established hierarchies.” Although the wagon trains are no more, this “frontier ethos” remains etched in America’s DNA, shaping the way we think about the world.

This ethos has a degree of aggression and can lead to overreach—Kaplan cites the Iraq War as an example. That’s why it is so important to recognize the other traits that the frontier instills: pragmatic initiative, a sense of restraint and keen recognition of limits. For those of us who grew up in this part of the United States—near the hundredth meridian in Nebraska, in my case—this observation has special appeal.

Kaplan sees the frontier as the “secret sauce” of American greatness, and when it comes to exercising power in the world, we should heed its lessons. “The frontier,” he writes,