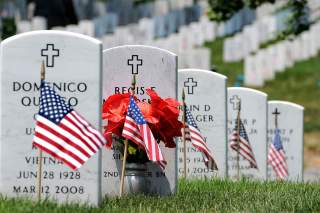 So many have fallen. Battling for independence. Holding the flank at Little Round Top. Taking ground at Belleau Wood. At Midway, in MiG Alley, in Khe Sanh and in so many places known and unknown, American soldiers, sailors, Marines, airmen and Coast Guardsmen gave the last full measure of devotion. We set aside one day to collectively remember and honor them all.

Remembrance of so many, on so many battlefields, overwhelms the importance of each and every life lost fighting in defense of our country.

Maybe the best way to remember them all is to stop and remember one.

Donnie D. Dixon was a Greywolf. He fought with the Third Brigade, First Cavalry Division. In 2007, the Greywolf Brigade was in Diyala, Iraq. In 2007, if you were an American soldier, there were few tougher places to be. The year before, insurgents fighting in Anbar overflowed into a province the size of Maryland. The Iraqi units withered away.

Al Qaeda walked in, driving a wedge between the people and the government. The whole province began falling apart.

U.S. doctrine called for holding and clearing territory, pushing the insurgents out. There weren’t enough troops to hold on to anything much more than the places where they bunked.

American doctrine also called for working with the local populace, squeezing the places where the insurgents could freely operate. But knitting together the people of Diyala looked like mission impossible. There were twenty-five major tribes in the province. There were hundreds of subtribes. Some were Shia, others Kurds, others Sunni.

Every problem that postwar Iraq had, Diyala had. It was Little Iraq; winning back Diyala was like trying to win the whole country.

None of these challenges could be mastered by hanging around the command post. The staff sergeant was the right-hand man of the brigade commander. Where Col. Dave Sutherland went, Sergeant Dixon went. And that meant going in harm’s way pretty much every day.

The brigade recruited new volunteers for the Iraqi units. The U.S. troops handed out rice and flour so their families wouldn’t starve. The Americans trained them and supported them. Then they went back out into the province to fight the insurgents and win back the tribes.

In the end, Colonel Sutherland recalled the people of Diyala took back their province. The American troops were the “enabler” that made that possible.

But this small victory came at a cost. Part of the price was Donnie Dixon. He took a bullet—likely one intended for his colonel.

The Greywolfs suffered more than their fair share of casualties. No loss was felt more than the loss of Donnie Dixon.

Loss doesn’t end on the battlefield. Every casualty is a small tragedy for an American hometown. “He died doing what he always wanted to do, serving his country,” recalled his mother in Miami. True, but that doesn’t make the pain of the loss any less.

Donnie’s story is just one of the many that could be remembered on Memorial Day. His life serves as a double reminder. It is a reminder of the service and sacrifice of all our fallen men and women who died in the service of the country. His life is also a remembrance that beyond this one day, we continue to remember and serve those that served every day by serving and supporting our veterans and their families.