The Simple Way to Save the U.S. Military 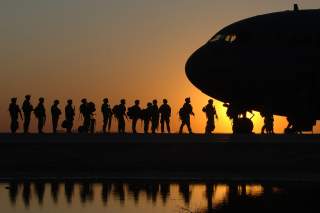 Within the past few months the Pentagon has announced the deployment of new combat power in Norway, Poland, Lithuania, Syria and Africa. This extends (and accelerates) a trend expanding the deployment of military power abroad. This alarming development is not in response to any expanding military threat. In fact, there is little observable rationale at all. The incoming administration and new Congress have a chance to rectify this dangerous tendency. If they fail to do so, then the risks to American national security will rise to dangerous levels.

There is no grand strategy discernible in the multiple and simultaneous global deployments recently ordered, but neither is there a unifying vision for how military forces will be used in the theaters into which they are sent. For example, beginning in 2014 the president authorized the deployment of a small number of troops to Iraq, and the following year gave the order to begin air strikes in Syria. Since that time, however, the size and scope of both missions have been consistently expanded in small increments.

At no time since the missions began has the White House clearly articulated a strategy and national objective for this use of force. Whenever deployments are announced by the Pentagon, its military leaders explain the tactical purpose of sending the troops on missions—i.e., explain that troops will go and help a rebel group or that jets will attack an extremist organization—but those leaders don’t discuss what the missions are intended to accomplish.

Such omissions make it impossible to determine if there is any utility to the nation in conducting a given task. Additionally, there are no metrics by which the tactical utility of the mission could later be measured. U.S. military personnel are the most capable and trained forces in the world, and they successfully accomplish the vast majority of tactical tasks given to them. But since there are no metrics to gauge mission success, then no one can say whether those successful tactical engagements contribute to U.S. national security.

The only thing that can fairly be said is merely that operations “took place.” That is an irresponsible use of valuable and limited national resources. The use of the U.S. military must be directly tied to a grand national strategy designed and approved by civilian leadership in the White House, and affirmed and funded by the Congress. No such dynamic currently exists. Without a remedy, this disconnect poses a danger to the republic.

This dysfunction has unquestionably harmed U.S. interests. Wars have increased, terrorist threats have exploded and U.S. military power has deteriorated from perpetual use over the past two decades. As a result, the risk to America’s national security has increased to what ought to be unacceptable levels. But don’t fall into the trap of believing that the solution to degraded readiness is to increase the military budget. If sequestration is lifted, then the most likely result will be a continuation of the deterioration of U.S. military power, not its relief.

The cause of the military’s decreased ability to defend the nation from the full range of threats is its overuse, its employment into areas that do not represent vital national interests and the conduct of missions against marginal threats. None of those problems will be resolved merely by throwing more money at the Pentagon. To the contrary, it would most likely exacerbate the problem, since policymakers would likely believe that increased funding would allow them to continue perpetual employment.

To the military’s credit, it has recently renewed its emphasis on training for full-spectrum conventional operations. That is a good first step. But by itself, it is not nearly enough to solve the readiness problem. There are, however, two major steps that could restore the ability of the armed forces to guarantee U.S. national security.

First, the incoming administration must break with the status quo of the past two decades and take an appetite suppressant on the employment of lethal military power. President Trump has repeatedly promised to get the United States “out of the business” of regime change. Let us hope his restraint includes ending the propensity of sending the military abroad to conduct numerous inconsequential missions.

Second, and probably more importantly, Congress must rediscover its constitutional mandate. It must once again commit to conducting hearings and investigations before decisions are made on the use of force abroad. This is no pacifist measure. I am a proponent of building and maintaining a ready force that can guarantee the security of American borders and citizens against any threat.

The charge to Congress is to actively certify that any proposed military mission is only approved and funded if it is in the national interest. If examination proves a given mission is necessary, then Congress should by all means fully support and fund it. But if not, then we rely on Congress to perform it role as a necessary check on unnecessary military adventures.

If the administration commits itself to a more judicious use of the military and if Congress rediscovers its constitutional power to act as the people’s agent, then the readiness of the armed forces may be restored without the need of increasing defense spending.

If the nation sends the military abroad in fewer cases, the troops will suffer fewer casualties. Military equipment—like jets, tanks and other armored vehicles—won’t get worn out at alarming rates, as is currently the case. Maintaining the enormously expensive cost of logistics lifelines necessary to support each foreign mission would be lessened.

All of these measures would significantly reduce the financial strain on the federal budget. More important, however, is that soldiers, sailors, airmen and Marines would be able to conduct more of the training necessary to ensure that if ever faced with an existential threat, there would be no question of their ability to defeat it. We do not presently have such certainty.

That is the legacy of permanent, unaccountable and ineffective use of the military, which has become the norm. The new president and Congress have an excellent opportunity to quash the ineffective status quo that has reigned for sixteen years. For the security of the nation, I hope they don’t let this chance slide by.