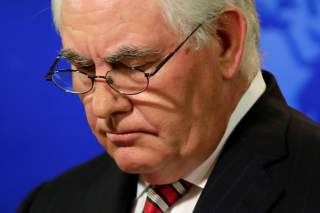 Trump has lately lost not only certain key right-wing personnel who previously had checked, or at least challenged, the more conventionally minded businessmen and military figures who now dominate the administration, but he has also lost key politically minded personnel, like Kelly’s predecessor as chief of staff, Reince Priebus, and former press secretary Sean Spicer. An administration that was previously a coalition of right-wing ideologues, Republican operatives, generals, tycoons and Wall Street financiers is today chiefly run by the financiers, tycoons and generals: by the likes of Cohn, Tillerson and Kelly. H. R. McMaster, the national security advisor, was a particular target of Bannon’s opposition—and still is, now that Bannon is back at the news outlet Breitbart. McMaster’s plans for a troop buildup in Afghanistan had been thwarted for months. Now they’re set to proceed.

Bannon and Breitbart insist that an informal coup has taken place. On leaving the administration, Bannon told the Weekly Standard, “The Trump presidency that we fought for, and won, is over.” But whether or not Kelly or anyone else has a master plan to change the way this administration works, Trump may have lost so many limbs of his coalition inside government that he now must depend on the few that remain. If he were to lose Cohn or McMaster or Kelly himself, there might seem to be no end to the implosion.

The generals, financiers and tycoons have won out in part because they have attracted less attention—from the media and the acutely media-conscious president—than the now-severed limbs of the administration. Sean Spicer was before the cameras every week, and the president kept score of his performance. He decided to bring in Anthony Scaramucci to “help” Spicer—but Spicer wanted nothing to do with the Mooch and so, perhaps to no one’s surprise, he resigned. (Scaramucci, of course, did not last.) Bannon annoyed Trump by becoming a focus for journalists who wished to find an ideological master strategist behind Trump’s success. Spicer, Scaramucci and Bannon all painted targets on themselves by being so prominent. The generals and Goldman Sachs men of the administration, by contrast, know how to wield power without being conspicuous.

Yet Cohn and Tillerson have been conspicuous in recent days for their unwillingness to follow the president’s line on Charlottesville. They know that Trump is in a poor position to fire anywhere else at this moment, and they feel strength in mutually reinforcing numbers: to dismiss Tillerson or Cohn would be costly, but both at once? And when they surely have the support of Kelly, McMaster, and the president’s daughter and son-in-law, Ivanka Trump and Jared Kushner? With such a disposition of forces, Trump may indeed only “speak for himself” even within his own administration.

That is, if it still even is his administration: Trump would hardly be the first king to be deposed in everything but name by his own court. The president had a much stronger hand weeks ago—before Charlottesville—when he clearly wished to be rid of Attorney General Jeff Sessions. Yet he could not get his way even then, and Sessions toughed out Trump’s public abuse on Twitter. To all evidence, Sessions is not an ideological ally of Cohn or Tillerson, but he has shown how a ranking administration official can weather the president’s temper.

The political realities within the administration itself might compel Donald Trump to behave more like an ordinary politician. They might just as well, however, lead to a situation in which in there are two Trump administrations—the president, and what he says, on one side; and the cabinet and most top White House personnel, and what they do, on the other. Whether that configuration could last any longer than the original Trump coalition’s eight months is an open question. Already the refurbished Trump administration faces two urgent tests: the disaster in Houston and the looming challenge of tax reform. Gary Cohn’s Financial Times interview was primarily on the latter subject. Yet his angst and dissent over Charlottesville was what attracted all the attention.