The Smithsonian Goes to Church 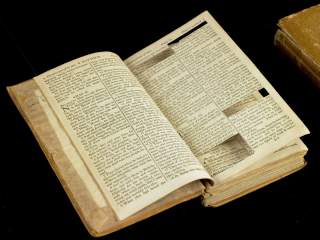 Not all legends about America’s founders are false. Young George Washington didn’t really chop down the cherry tree, and Betsy Ross probably didn’t design the first Stars and Stripes. We teach these myths as part of our country’s origin story, initiating young Americans into the symbols and rituals of the republic.

But Thomas Jefferson really did redact the New Testament with a razor and glue, to make a Bible that was more to his liking. Hacking away miracles, Jesus’s divinity and the resurrection itself, he fashioned a radically rationalist scripture for a more enlightened age.

You can see the deist’s collage in the glass case in the center of the room. Here’s a King James Bible open to Matthew 10, with “the kingdom of heaven is at hand” left untouched by the scalpel. Next to it lies the God-free scrapbook of pasted verses that the Jefferson called The Life and Morals of Jesus of Nazareth, like a heavy-handed work of conceptual art at the Hirshhorn across the Mall.

Jefferson’s blasphemous Bible is part of what the National Museum of American History says is its first-ever exhibition on religion in the United States, which opens Wednesday. Spanning from the colonial era to the 1840s, “Religion in Early America” depicts a young country in which Americans wrestle with their gods in often uncharted territory.

The Smithsonian—with its new religion curator, Peter Manseau—appears to recognize how monumental and daunting a task it is to convey the contents of a society’s soul. Instead, Manseau is at his best taking snapshots of individual lives: a West African slave jotting down all the Islamic teaching he can remember, a fourteen-year-old girl stitching devotional poems in New Jersey, a Massachusetts churchman hastily replacing “King” with “Congress” in his Book of Common Prayer. There is also a Torah scroll, visibly scorched during the 1776 British occupation of Manhattan, and the saddlebags that accompanied a former slaveholder as he atoned for his sins, preaching abolition.

Manseau is an unusual man for the job: before joining the museum, his work had included running an influential online “religion magazine for people made anxious by churches,” called Killing the Buddha. His books include a memoir about his parents—formerly a Catholic priest and nun—and a travelogue in pursuit of the world’s human relics. In other words, he’s attracted to the bizarre and sometimes discomforting ways in which religion makes us behave.

The National Museum of American History, meanwhile, has a somewhat musty reputation as “America’s attic,” preserving hallowed artifacts with the stamp of federal officialdom and enthroning the founders as Greco-Roman gods in our civil religion, while sometimes functioning as a collection of miscellanea rather than telling a coherent story.

Some of that is certainly at work here, as with two lavishly engraved Bibles associated with George Washington, one from his first inauguration as president and one that Martha studied in her own devotions. Besides their heft and beauty, they mostly appear to serve the cause of national hagiography; as loaned objects, they’re not there to show off the Smithsonian’s own collection. Washington’s baptismal robe is more telling: it’s next to a silver bowl in which George Mason’s family christened its babies—and chilled its wine. While the Church of England was legally established in colonial Virginia, religious activity was often a domestic affair, especially for landed gentry like the Masons and Washingtons.

Elsewhere, the framing themes of the exhibit, spelled out in big letters, are “diversity,” “freedom” and “growth.” More than anything else, the sheer variety of early Americans’ religious experience is on astonishing display, supplemented through considerable loans from institutional and private collections across the country. Children learned morality and scripture from didactic spelling books as well as “Sunday toys” like the inviting Noah’s Ark playset (there’s two of every animal, plus a rat that might have stowed away onboard). In Baltimore, lottery tickets funded the country’s first Catholic cathedral, while Haitian immigrant Mother Mary Lange founded a school and religious order for black women. A cross of hers is on display—under seal as a prospective second-class relic while the Vatican investigates her for sainthood.

Far from the cities, John Eliot translated the Bible into the language of the Wampanoag, as much a tool of evangelism as a fundraising prop for the church back in England. And America spawned its own innovations, too: there’s currency used by the fledgling Mormon colony in Kirtland, Ohio, with a handwritten page from their new scripture, and products made for sale by the Shakers.

“Religion in Early America” is set to run for just one year, in a small gallery flanked by two mammoth fifteen-year-long exhibition spaces. It’s not perfect; Manseau told me himself, for example, that “Catholics are probably overrepresented here, because they have such great material culture.” And the focus on individuals is sometimes overbearing: some people, like the protofeminist and Quaker minister Lucretia Mott, seem included just to check a box (though her ghostly cloak and bonnet make for a haunting, empty echo of her portrait). Likewise, a church bell cast by Paul Revere seems to have been included just because it’s from Paul Revere.

Nevertheless, the tenacity with which the show attempts to get inside the heads of people who died two or three centuries ago is admirable. As an exploration of early America’s thorniest, weirdest nooks and crannies, it’s a worthy effort.

Image: Source Bible for Thomas Jefferson’s The Life and Morals of Jesus of Nazareth. Courtesy of the Smithsonian’s National Museum of American History.