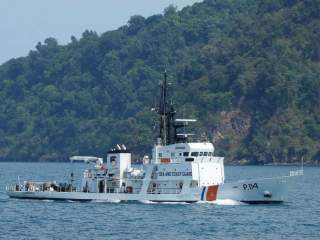 But theory can only go so far when the parties concerned have a different, or even revisionist, interpretation. China, for one, has quashed Kearsley’s idea. The recurring South China Sea incidents are illustrative: no longer are “white hulls” more dovish than their naval counterparts. In some cases, the coast guard can prove to be aggressive while the navy is relatively docile.

Outside Asia, the last notable instance of a coast guard exhibiting unusually aggressive behavior was Iceland’s coast guard, the Landhelgisgæslan, which not only relentlessly chased after foreign trawlers in the North Atlantic, even cutting their fishing nets, but also challenged more heavily armed foreign navies during the infamous Cod Wars. One such notable confrontation took place in June 1973, when the seventy-meter ICGV Ægir rammed into British frigate HMS Scylla, which is 113 meters long and has more than twice the Landhelgisgæslan gunboat’s nearly 1,200-ton displacement, at 2,500 tonnes.

The contemporary China Coast Guard (CCG) is perhaps a more aggressive rendition of the Cod War–era Landhelgisgæslan. One major difference is that the CCG and its two predecessor agencies—China Marine Surveillance and Fishery Law Enforcement Command—are dealing with comparatively weaker Southeast Asian rivals in the South China Sea.

Southeast Asian governments have generally devoted limited resources to navies and paid even less attention to “white hulls.” This first changed during the early 2000s, when the region witnessed a scourge of piracy, sea robberies and other transnational maritime crimes, leading to the emergence of new or expanded coast guard–type agencies. The Malaysian Maritime Enforcement Agency (MMEA) was formed in 2005. Indonesia renamed its existing coordinating agency BAKAMLA in 2014. The newly formed Vietnam Fisheries Resource Surveillance joined the Vietnam Coast Guard in 2013.

These coast guard agencies are meant to alleviate navies’ peacetime constabulary burden and facilitate a legal approach in enforcing maritime sovereignty and jurisdictional rights, as granted by the United Nations Convention on the Law of the Sea. Compared to the 326-vessel CCG (including one hundred offshore-capable assets), these agencies were much smaller in size by the end of 2015, according to the latest Military Balance 2016. Their assets are also mostly ill-equipped inshore and coastal craft, which may suffice against criminals at sea, but are essentially helpless against a larger, better-equipped coast guard adversary in an offshore environment. The recent Sino-Indonesian standoff in waters off the Natuna Islands is just one incident that amply illustrates the severe limitations of Southeast Asian coast guards.

Indeed, Indonesia's BAKAMLA musters over one hundred vessels under various subordinate agencies. But the overwhelming majority are suited for inshore and coastal duties, like the fishery patrol craft HIU-011, which was involved in the latest incident. Fewer than ten are offshore patrol vessels (OPVs). While the navy remains keen to perform constabulary duties, its offshore assets are disproportionately too few for the colossal Indonesian archipelago. In any case, only three of the navy’s seven ships are stationed at the islands, the bulk of enforcement work being left to the under-equipped BAKAMLA assets.

Of Malaysia’s 190-strong MMEA fleet, only two vessels are OPVs capable of enforcing Kuala Lumpur’s offshore claims. They are about thirty years old, and simply too few in number. The navy first responded to China’s intrusion off the South Luconia Shoals in September 2013. According to the hansard of a parliament Senate session in December 2015, the navy and MMEA conducted 191 and seventy-eight patrols, respectively, to monitor the Chinese off the shoals in 2014; in 2015, they each conducted 241 and 104. The MMEA clearly needs more offshore-capable assets, but the seven recently approved OPVs will take time to enter service, and may not suffice for Malaysia's vast maritime zone.

The seventy-two-strong Philippine Coast Guard (PCG) fleet counts only five offshore-capable assets. The navy therefore bears the brunt of South China Sea enforcement duties, and the ensuing humiliations too. Reminiscent of the Icelandic coast guard face-off with Royal Navy during the Cod Wars, smaller Chinese coast guard vessels thwarted attempts by the Philippine Navy ship, BRP Gregorio del Pilar, from apprehending Chinese fishermen at the Scarborough Shoal in April 2012. Since then, Chinese coast guards maintained vigil at the shoal while Manila kept its navy away. But the PCG is obviously outmatched by its Chinese counterpart, thereby ceding de facto administration of the shoal to Beijing.

Finally, Vietnam is in a better position, since its fewer than fifty coast guard vessels include slightly more than ten offshore-capable assets. Yet this shortfall was acutely felt during the oil rig standoff with China between May and July 2014. In the first place, because of their small physical sizes, Vietnam’s coast guard vessels lack the necessary endurance, and so need to be constantly rotated in order to sustain a Vietnamese presence. To illustrate, one Chinese OPV possesses the same endurance equivalent to two smaller Vietnamese craft deployed in rotation. Essentially, Vietnam's coast guard capacity was “maxed out,” imposing strains on existing assets given the high operational tempo, compromising normal maintenance routines.

Knowing this, China appears confident of success in the South China Sea. Its calculations paid off; not only are its Southeast Asian rivals incapable of fielding any coast guard that can match it in numbers and quality, but they also avoid deploying navies. Even when they do send in the grey hulls, these forces behave cautiously. In any case, they are well aware that the Chinese navy is too superior to trifle with. When Admiral Scott Swift, chief of the U.S. Pacific Fleet, warned of a “palpable sense” in the region that "might makes right" has taken root as a philosophy, he was correct.

Remember one of James Cable’s astute observations in the seminal work Gunboat Diplomacy: sheer size matters. The side with the larger fleet and superior vessels prevails. This is a sobering reality played out in the South China Sea incidents: larger coast guard ships can furnish Beijing a “stabilizing” and “defensive” veneer to justify its own strategic narrative of being “victimized” in the disputes.

But the recent South China Sea incidents symbolize the common issues Southeast Asia faces when building maritime security capacities: insufficient funding, occasional lack of political will and, for some, endemic corruption. China has a larger baseline capacity to begin with, not to mention the requisite resources and shipbuilding capability to expand its coast guard, including more offshore-capable assets that displace three thousand tons and more. Nonetheless, if Southeast Asian governments wish to enforce their maritime sovereignty and jurisdictional rights, the least they can do to beat the odds is to focus on more cost-effective, offshore coast guard capabilities instead of expensive toys for the militaries.

Koh Swee Lean Collin is associate research fellow at the Institute of Strategic and Defence Studies, a constituent unit of the S. Rajaratnam School of International Studies based in Nanyang Technological University, Singapore. Collin primarily researches on naval affairs in the Indo-Pacific, focusing on Southeast Asia (see here). He can be reached at [email protected].