The State of Race in America 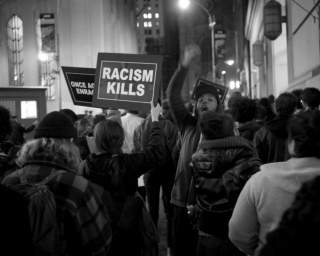 In 1966, the legendary folk-rock duo Simon and Garfunkel recorded “Silent Night” over a simulated nightly news report. One of the most recognizable Christmas carols performed against the backdrop of war, crime, racism, and comedian Lenny Bruce’s untimely death.

Come Christmas 2014, the names have changed but the song remains the same. America is at war not only abroad, but also at home.

From Ferguson, Missouri to New York City, mostly black crowds chant “I can’t breathe,” deeply convinced that their children and fathers are at risk of having their most basic human rights violated by the people their tax dollars pay to protect and serve them.

In some corners, the appeals for justice turned into cries for blood. Protestors were photographed carrying banners saying, “No cops, no jails.” Others chanted, “What do we want? Dead cops! When do we want them? Now!”

What the mob demanded, soon it received. Officers Wenjian Liu and Raphael Ramos were brutally murdered by a crazed gunman who thought he was avenging Eric Garner and Michael Brown. Two New York policemen killed in cold blood.

That city increasingly seems as if Rudy Giuliani was never mayor, at least in terms of division and cultural convulsion, if thankfully not yet in actual crime rates. Bill DeBlasio, the left-wing incumbent mayor, seems determined to make David Dinkins look like a law-and-order Ed Koch Democrat.

Giuliani is once again speaking out in defense of New York’s beleaguered men in uniform, but approaching the current crisis without the nuance and sensitivity that characterized his best years as mayor. “White police officers wouldn’t be there,” he said exasperatedly to African-American scholar Michael Eric Dyson, on “Meet the Press,” “if you weren’t killing each other.”

On the other extreme, come the screams of “no justice, no peace,” the slogans denying the legitimacy of basic law enforcement measures, ranging from arresting criminals to deporting illegal immigrants.

Agnew campaigned as a Republican opponent of racial discrimination in housing, while his Democratic opponent vowed, “Your home is your castle.” (Back then, even the media had to acknowledge that dog whistles weren’t blown exclusively by Republicans.)

But in the aftermath of Martin Luther King’s assassination, as Baltimore burned, he took a hard line against rioting and extremism. While black radicals like H. Rap Brown and Stokely Carmichael called for violence, Agnew called together dozens of moderate black leaders for a meeting.

The remarks Agnew delivered to these civil-rights leaders, dismissed by white liberal Baltimore journalist Jules Witcover as an “insulting sermon,” got him added to the national Republican ticket as Richard Nixon’s running mate later that year. What did he say?

Agnew expressed concern that the “overwhelming majority” of black Americans who were “responsible, hard-working, decent people” would be “unjustly victimized by a hardening of attitudes in the responsible, decent white community” in the aftermath of the riots. He wasn’t calling for “white backlash.” He was warning against it.

Recalling the controversial speech, I wrote that Ferguson had a (Jay) Nixon but really needed an Agnew.

This time of year is a good time to remember the good old days, but the pre-MLK 1960s and pre-Giuliani, high-crime New York were examples of the bad old days. So were the riots of Watts, and Los Angeles after Rodney King.

The divisions we once fervently hoped would go away, with Bill Cosby becoming America’s dad (how long ago that now seems) and Barack Obama becoming president of the United States, once again seem as present as ever.

It is easy to look at the seven o’clock news and give into despair, to see a country sinking into a culture war, a new Cold War, perhaps even a low-intensity race war.

Until we realize we have been through grave times before and come through. One day, the deaths of Garner and Brown, Liu and Ramos, the vilification of “cops” and “thugs,” will be remembered as the bad old days too.

Americans are awake to the ugliness of it all, but now is the moment to sleep in heavenly peace.