The Surreal Summit in Singapore 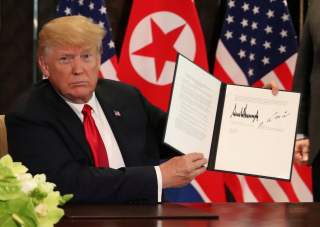 If there were any doubts that Donald Trump is permanently booked at The Grand Delusion Hotel, his early Wednesday morning tweet erased them.

The president claimed, “Everybody can now feel much safer than the day I took office. There is no longer a Nuclear Threat from North Korea.” If only that were true.

There is not a single, credible nuclear-security expert who would agree that the bizarre Singapore summit and the vague communiqué it produced has eliminated the dozens of nuclear weapons, hundreds of missiles and the vast nuclear weapon complex North Korea has constructed over the past five decades.

The entire spectacle “was weird,” Ambassador Christopher Hill told MSNBC anchor David Gura as we sat together on set in New York at 2 a.m. Tuesday morning. We were up all night trying to make sense of what we were seeing and provide some semblance of expert analysis. “The whole presentation was very strange,” said an exasperated Hill.

When enterprising reporters and experts realized that they could read the one-page statement from still photos of Trump flashing his signed copy to the crowd, we got the text before the official 4 a.m. release and press conference. We were stunned at the contents. In real time and on-air, we quickly compared it to the 2005 agreement that Hill had negotiated and the 1992, 1993 and 1994 agreements. It was hard to believe what we were reading.

Hill and most other experts had been deeply skeptical all along. I had been more positive. Surely, they hadn’t staged all this, made all these forward-leaning statements without some major down payments by North Korean leader Kim Jong-un on disarmament? But they had. Kim did not commit to anything new or even reaffirm his unilateral moves preceding the summit.

After the years of false claims and angry complaints about the inspection process in the Iran anti-nuclear agreement, there was not even a hint of verification in the Kim-Trump agreement. “This is the first time in agreements written in the past where there is no reference to either verification or inspections going all the way back to 1992,” Ambassador Wendy Sherman told anchor Hallie Jackson as we both continued our analysis mid-morning Tuesday. “We have a very long way to go,” warned Sherman, reflecting the expert consensus. Some were more blunt. “The statement is a joke,” said Middlebury Institute scholar Jeffrey Lewis.

Yet, there may be an upside to this madness. Though the summit statement was weak, with denuclearization reduced to smiles and handshakes, the right-wing is now lashed to the mast of engagement with North Korea. That is infinitely better than John Bolton’s plan to start a war with North Korea and Senator Lindsey Graham’s chilling claim that even though millions would die in a new Korean war it would be “worth it” because it would all happen “over there.”

Hard-line opposition to any deal has long been the chief obstacle to negotiating and keeping an agreement with North Korea, not North Korean duplicity (though that is always a problem). John Bolton has personally killed at least two agreements with North Korea, including the Agreed Framework in 2003 and the nascent 2005 agreement (just ask Hill how Bolton’s Banco Delta Asia Bank sanctions killed the deal the very day they finalized it). Trump has now delivered the right—in this case personally sitting John Bolton down at the table and making him shake hands with the leader of a regime he has spent most of his life denouncing.

It is also possible that this informal process could yet work; that Kim is more committed to changing the strategic and economic relationship with America and the West than supposed. If so, other announcements may come. Kim could—as Trump has promised—take further dramatic actions.

“We have to understand that this summit was a first step,” Stimson Center expert Laicie Heely reminds us. The danger is that the other steps have to happen quickly. The agreement likely has the half-life of gold-195, the radioactive isotope of Donald Trump’s favorite element, which decays in 186 days. The entire enterprise could fall apart within the six months that Trump referenced in his press conference for when he may have to come back and explain why he was wrong. His “excuse” could come on the tips of missiles launched by an angry leader looking to cover up failure.

Kim has the support of China and Russia, who are both pleased by the summit outcomes. Trump has garnered the praise of South Korea, where a jubilant President Moon Jae-in pledged his full support. Other than that, Trump is alone. This is the agreement of two autocrats. There was little pre-summit consultation, little thought given to the opinion of allies even before Trump took a wrecking ball to the G-7 summit. The South Korean and US militaries were blindsided by Trump’s announcement that he would end the joint U.S.-ROK military exercises. Trump appears to be serious about the idea he casually mentioned at his rambling post-summit press conference. Russia, which has been increasingly vocal in its protests of these exercises in recent months, seems particularly pleased by this concession.

Indeed, this could be seen as more of a favor to Russia than North Korea, which had recently signaled that the exercises could go on if just long-range bombers and other nuclear-capable and offensive elements were removed.

Kim did not have to promise anything more than he had already promised. In fact, the “comprehensive” communiqué did not formalize Kim’s promise to end tests of nuclear weapons and long-range missiles and the export of these weapons, let alone expand this to a freeze of the production of these weapons and the nuclear materials needed to make them.

Here’s what is needed to preserve this fragile accord.

Secretary Mike Pompeo is on the hook to produce a sustainable, successful agreement, both to please his boss and to further his own political ambitions. He has to quickly move from explaining the unexplainable to Asian allies to getting his teams into serious talks with their North Korean counterparts. The summit communiqué is a handicap he will have to overcome. It detailed little, even failing to mention who his North Korean negotiating partner would be (a typical North Korean move to gain negotiating advantage).

If there is any hope for this process to work, then Pompeo will have to set up joint teams to nail down details immediately. They will have to produce a declaration of North Korea’s nuclear weapons, nuclear materials, missiles, manufacturing facilities, etc. They will have to get agreement for inspections from the International Atomic Energy Agency and U.S. inspectors. They will need a plan and a rough timetable for dismantlement. This is going to be a complex, lengthy process of the kind detailed by Dr. Sig Hecker and Dr. Bob Carlin in their new Stanford University study. It could take five to ten years to complete, though the most significant steps could be done in the next two years, perhaps in time for the 2020 election.

Expert analysis from nongovernment institutes will be particularly critical during this time. The State Department team is thin; the department itself is woefully underfunded and understaffed by the policies of the Trump administration. Outside experts can offer useful, even necessary, advice like the technical road map produced by the Stanford team or the negotiation and diplomacy advice offered by the International Crisis Group in their new study released this week.

This is not a promising start. The Singapore summit is a diplomatic breakthrough but a strategic half-step. To turn television props into sound policy, the administration will need all the help it can get. We have to hope that they will be willing to accept it.

Image: U.S. President Donald Trump shows the document, that he and North Korea's leader Kim Jong Un signed acknowledging the progress of the talks and pledge to keep momentum going, after their summit at the Capella Hotel on Sentosa island in Singapore June 12, 2018. REUTERS/Jonathan Ernst