The Tax Wars Come to Kansas 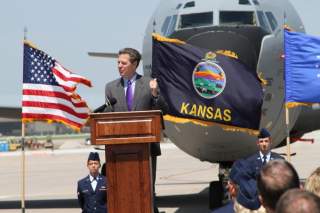 Brownback, the state’s conservative Republican governor, is under fire. At least one poll shows him trailing in his reelection bid. Another has Brownback ahead, but below the critical 50 percent threshold for an incumbent.

More than one hundred current and former Kansas Republican elected officials have endorsed Brownback’s Democratic opponent in a coordinated effort billed as “Republicans for Kansas Values.” This has led some observers to describe “a Republican revolt” against Brownback.

New York Times columnist Paul Krugman has led an all-out liberal assault on Brownback’s tax cuts, averring that the steep drop in revenues without any concomitant economic boom disproves supply-side economics and the “magical powers” of low taxes. His post, since emulated by many others, was titled—with typical Krugman restraint—“Charlatans, Cranks and Kansas.”

Some context is in order. Kansas has traditionally been a reliably Republican state, but not necessarily a conservative one. The state GOP has long been divided between moderates and conservatives. Antitax activist Grover Norquist describes it as a split between “Lincoln Republicans,” whose loyalty to the party is based on habit and custom dating back to the Civil War, and “Reagan Republicans,” who are in ideological agreement with the party’s post-Reagan platform.

Brownback is widely seen as encouraging, and certainly doing nothing to stop, a purge of moderate Republicans from the state legislature. The most prominent of these Republicans was Steve Morris, who was president of the Kansas state senate. Morris lost to a conservative primary challenger in 2012 and is now supporting Paul Davis, Brownback’s likely Democratic opponent.

Morris’ removal helped pave the way for the enactment of the widely denounced tax cuts, trimming the top tax rate from 6 percent to 4.5 percent and reducing the tax on small-business income to zero.

In some ways, Brownback’s rise does dovetail with the story told in Frank’s 2004 best seller. The evangelical-turned-Catholic rode a wave of conservative populism to displace both the state’s Democrats and the Sheila Frahm/Nancy Landon Kassebaum centrist Republican establishment.

As a U.S. senator and short-lived 2008 presidential candidate, Brownback was mostly identified with the Christian right. Now his legacy hinges on taxes.

If Brownback is defeated during an election cycle in which Republican fortunes are rising nationally and—more importantly—his economic experiment is judged a failure, his attempts to push policy to the right will not be replicated by many other GOP governors and state legislatures. And perhaps a Kansas counterrevolution, the return of the Kathleen Sebelius Democrats, will begin.

It’s worth noting that the Kansas tax cuts have only been on the books for eighteen months. Some presidents of the United States I can think of have pleaded for a far-longer time period to evaluate the success of, say, the 2009 stimulus program. First quarter income tax returns were down in over thirty states, with as many as ten posting double-digit declines in revenues, in a number of cases without any tax cuts.

Kansas hasn’t traditionally been a low-tax or low-spending state. The Tax Foundation ranked it 26th in per capita tax burden before the tax cuts. Its economy wasn’t exactly a juggernaut relative to other states when taxes were higher: Kansas ranked 20th in state gross domestic product growth, 38th in net domestic migration and 29th in nonfarm payroll growth.

But taxes are far from the only thing that matters when it comes to growth. It is frequently pointed out that the economy grew smartly in the 1990s after an increase in the top marginal tax rate under Bill Clinton. The growth was somewhat more episodic in George W. Bush’s 2000s, despite a lower top tax rate.

Of course, all this really proves is that a 39.6 percent tax rate (still well below pre-Reagan heights and accompanied by other tax cuts, including a 1997 reduction in the capital-gains tax) isn’t high enough to strangle an Internet boom and a 35 percent tax rate isn’t low enough to stop a financial crisis that didn’t have much to do with tax policy.

Nevertheless, the country will be watching to see how Brownback does at the polls and whether tax cuts can help ameliorate what’s the matter with Kansas.