The Tell-Tale Signs That Trump Has Conformed to Washington's Ways 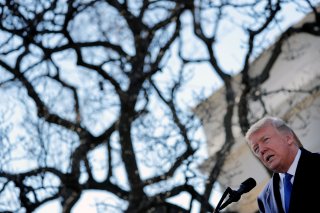 Last Saturday marked Donald Trump’s first anniversary as president of the United States. As one might expect during such an occasion, various news outlets published a stream of news reports looking back on President Trump’s first twelve months, some tracking his accomplishments and failures during that time while others analyzed how the entire country has evolved under the billionaire’s stewardship. The Washington Post wasn’t far behind; on January 21, the paper reached out to current and former foreign diplomats around the world to gauge how their countries have adapted to Trump’s “America First” foreign policy. The conclusion the story’s authors make is a succinct indictment on the Trump administration’s foreign-policy record: “the ‘America first’ approach has . . . left the United States far more isolated. The overall impact of the policy, say diplomats, politicians and analysts interviewed around the world, has been a clear retrenchment of U.S. power—and an opportunity for U.S. adversaries such as China and Russia.”

Continue reading and you could be forgiven for assuming that America’s very essence as the unchallenged superpower has passed. The mainstream, bipartisan Washington consensus that has dominated U.S. foreign policy ever since the Soviet Union came tumbling down a quarter-century earlier, the story suggests, is now being replaced by a nation deliberately ceding strategic influence to its great power competitors and allies alike. The Trump administration, we are told, holds an unconventional view of the world and a drastically different interpretation of America’s responsibility in it. It is as if the foreign-policy graybeards who served in multiple administrations are imprisoned in a dudgeon somewhere in the Beltway, locked up in their cells, never to be heard from again.

This assessment, while popular among the foreign-policy intelligentsia and commentariat in the Washington Post, the New York Times, and the Weekly Standard, is inaccurate to say the least. If Donald Trump the presidential candidate was the brash, unworldly, neophyte who ran against the liberal internationalism and neoconservatism that drove this country into a ditch, Donald Trump the president has largely grown comfortable with the very conventionality that has dictated U.S. grand strategy since the Cold War ended. Indeed, if European diplomats, not to mention many U.S. officials who once managed the national-security bureaucracy, are worried about Trump taking the United States in an altogether new direction from the hawkishness that gave us the strategic disaster of the Iraq War, the sixteen-year-and-counting expansion of the war on terrorism, and the slapdash 2011 NATO campaign in Libya, they ought not be. The actual policies Trump has signed onto during his first twelve months on the job are largely continuations of the U.S. foreign-policy status quo and in the spirit of the previous four administrations.

As both a presidential candidate and later as president, Donald Trump excoriated NATO allies for being stingy and sluggish with regards to their own defense spending. While previous presidents have expressed similar, justifiable complaints to their European colleagues about declining or stagnant military budgets, Trump took it to a new level entirely. He talked of Germany, the backbone of the European Union and the wealthiest and most productive economy in Europe, as a nation that had grown used to Washington’s military largess much as a spoiled child gets used to a hefty allowance from his parents. During his first meeting at NATO headquarters in Brussels, Trump avoided pledging the U.S. commitment to Article 5 of the North Atlantic Treaty, and he later used a private meeting with European leaders to criticize them for not meeting their spending commitments to the alliance.

But, when the pressure to conform from his own White House advisers, members of Congress, and to the vast majority of foreign-policy scholars in the Beltway was to great, Trump offered the same pledge that every Republican and Democratic president has made since NATO was founded nearly seventy years ago. The United States, he said, was indeed supportive of the alliance’s mutual-defense clause. Regardless of many times European members of NATO neglected to meet their own spending commitments to the alliance, the United States would meet its commitment to the Europe’s collective security. European leaders could rest assured that the Uncle Sam would not be leaving the continent to its own devices anytime soon.

Before President Trump decided to increase the U.S. military presence in Afghanistan by an additional three thousand to four thousand troops, and before he decided to relax the rules of engagement for commanders in the field, he essentially equated the Central Asian nation as a bottomless pit of doom. To Trump, the war in Afghanistan was never going to end as long as the United States stayed involved. For the businessman, bailing out a corrupt, weak and unstable Afghan government with tens of billions of dollars in U.S. taxpayer money was the definition of foolishness. “When will we stop wasting our money on rebuilding Afghanistan?” Trump tweeted in October 2011, “We must rebuild our country first.” Less than a year later, Trump tweeted again of his disgust for the war effort, remarking that because the Afghans were plagued by systemic corruption, Kabul simply didn’t deserve the payments Congress was pouring into the country. After a war that lasted over a decade, Afghanistan was very much considered by Trump as a lost cause where any further sacrifice from American service members would not make a difference. "Why are we continuing to train these Afghanis who then shoot our soldiers in the back,” Trump wondered. “Afghanistan is a complete waste. Time to come home.”

As commander-in-chief, however, Trump didn’t follow his own advice. The commanding general, his national-security adviser, his secretary of defense, and a good slice of Washington’s punditry wanted the administration to authorize a deeper American commitment to Afghanistan so the Taliban were prevented from capturing Kabul. And, despite any evidence to the contrary that a few thousand U.S. troops will be able to do what 140,000 coalition soldiers failed to do during the 2010–2012 surge, Trump reluctantly agreed to give the order. As a result, U.S. troops are not withdrawing from the longest war in American history, but are instead being recommitted to the very same provinces and districts U.S. troops fought and died for only years prior. U.S. Marines stationed in Helmand Province when Trump wrote his tweets are now back in Helmand five years later.

Syria is yet one more illustration of President Trump being usurped by a reflexively interventionist foreign-policy mainstream. When Trump spoke about Syria as a candidate, he largely treated it as a counterterrorism problem. Yes, Bashar al-Assad may be an evil and despicable human being, but he did not represent a direct national-security threat to the United States. The Islamic State, though, did, and Trump made it perfectly clear that his administration’s Syria policy would be focused predominantly on eradicating ISIS from the territory it captured. While the details of his war plan were sketchy and would undergo revision during the first several months of his presidency, Trump’s anti-ISIS mission was a simple one to understand. There would be no nation-building involved. The objective would be killing terrorists and helping America’s partners on the ground kill terrorists, a position the American people could support.

But what has occurred since the recapture of Raqqa from the Islamic State has been a complete end-run around Trump’s America First mantra. If Secretary of State Rex Tillerson’s address on the administration’s Syria strategy is actually implemented, Washington will soon be juggling multiple plates at the same time. Dismantling and defeating ISIS—and keeping it defeated—will now be one of several objectives. The others, which include assisting in the stabilization and reconstruction of cleared territory and using U.S. troops as leverage to accelerate a post–Assad Syrian future, is a complete change of mission that the American people are highly unlikely to support absent a full national debate. In Syria, America First has been surpassed by the more ambitious and expansive recommendations that have been percolating throughout Washington’s think-tank community for months. As former CIA senior analyst Paul Pillar astutely observed, the course the White House is now setting for itself in Syria “is a far cry from the impression candidate Trump once gave that he favored contracting missions for U.S. armed forces overseas rather than expanding them.”

Donald Trump, in short, may like to market himself as a refreshing break from previous presidencies, a man who is not afraid to—and in fact enjoys—standing up to the exclusive club of scholars, analysts, think tankers, and career diplomats who have run U.S. foreign policy for the previous twenty-five years. But in reality, regardless of the marketing, the confrontational tweets, and the off-the-cuff remarks, the bedrock of Trump’s foreign policy is not at all dissimilar to the very interventionism that he campaigned against. On the big issues, there is very little in the Trump doctrine that can be categorized as realism or restraint.

The national security by autopilot, meanwhile, goes on.