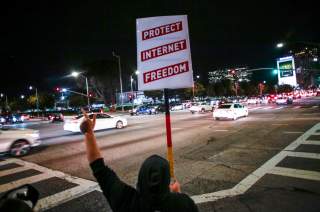 In 2011, as Americans became increasingly angry at Wall Street, many Republican politicians felt the need to defend capitalism overall while condemning its corrupted elements. They invoked the phrase “crony capitalism.”

Rep. Michele Bachmann accused her political rivals of crony capitalism. Mitt Romney said, “And if you want to get America going again, you’ve got to stop the spread of crony capitalism.” House Speaker John Boehner said that private-sector job creators had been “undercut by a government that favors crony capitalism and businesses deemed ‘too big to fail,’ over the small banks and small businesses that make our economy go.”

Flash-forward to the present moment and this political rhetoric seems irreconcilable with the conduct of Republican-appointed FCC Chairman Ajit Pai. Pai was formerly associate general counsel for Verizon. Now, as FCC Chairman, Pai is seeking to repeal net neutrality rules, fulfilling the desires of his former employer.

Is this crony capitalism?

Net neutrality seeks to keep the internet open and fair by ensuring that Internet Service Providers (ISPs) lack the authority to block websites, to selectively throttle bandwidth and charge premiums for fast lanes, and to debilitate competitors by making their websites slow.

The internet has become essential to daily life. It facilitates our personal, professional, and political communications and the delivery of a wide array of content. The current Title II classification makes it clear that it is unlawful “for any common carrier to make any unjust or unreasonable discrimination” or to “give any undue or unreasonable preference or advantage.”

The repeal of net neutrality would markedly go against this public interest, as has been expressed by members of the public themselves through broad coalitions and large demonstrations.

The incumbent Republican administration’s desire to reclassify the internet from its common-carrier status is perhaps a departure from a more generalized pro-business ideology, due to the fact that there would be clear winners and losers. Start-up companies are worried that the repeal of net neutrality would create barriers to growth. Political activists and clergymen are concerned about censorship. In addition, massive private sector employers oppose Pai’s plans.

Within an open internet, people can pull themselves up by the bootstraps and create bold innovation, enriching themselves and creating jobs for others, unencumbered by a system of tolls.

“This issue of net neutrality is so interesting because inside of Washington, it has become very partisan. And sort of identified as Republicans against net neutrality, Democrats for it. But you get five feet outside of D.C. and it looks completely different,” Craig Aaron said during a phone interview. “The issue hasn’t broken down at all neatly on partisan lines.”

Aaron is president and CEO of Free Press and the Free Press Action Fund. Previously, Aaron and other activists had to fight for years to convince the Obama administration to support strong net neutrality protections.

Now, ISPs are seeking to exploit a rare political nexus, Aaron said. “There’s sort of a bunch of things that have been on company wish lists for a long time, all being rushed forward because the lobbyists here in D.C. don’t know how long this political alignment and this administration is going to last,” he said. “And so they’re taking an approach that is like get whatever we can while we can.”

“You have one division of the government, the Justice Department, going after a company like AT&T for anticompetitive behavior,” Aaron noted. “And the Federal Communications Commission is actually going out of its way to make it easier for AT&T to act in an anticompetitive manner.”

Richard Grossman, a professor of economics at Wesleyan University, seemed to share Aaron’s concerns. “Repeal of net neutrality will allow ISPs to extract higher fees from companies—particularly smaller, newer companies—that won’t be able to compete on a level playing field with their larger, more established rivals,” Grossman said in an interview. “It may also provide an unfair advantage to companies that are part of vertically integrated broadband companies, since they may provide them with preferential access over nonaffiliated companies. This will discourage competition and make it harder for start-ups of all varieties, be they booksellers, travel agents, or streaming content providers, to get a fair crack at the market. Stifling competition in this way will harm consumers.”

ISPs, and Pai, have argued that the repeal of net neutrality would result in improved infrastructure. Essentially, by increasing their own profits through measures not currently available, ISPs would be able to invest in infrastructure and expand into new geographic areas.

However, some analysts have said that these companies might instead pay out increased dividends to shareholders. Aaron noted that ISPs are already very profitable.

“You set up a system where you have to have a slow lane to give the fast lane value and make money,” he explained. “You end up incentivizing these guys to discriminate, to favor their own sites and services, and not to invest in their networks.”

In the past, ISPs contacted Sen. Dianne Feinstein’s staff on the Senate Select Committee on Intelligence and claimed that net neutrality may prevent them from blocking terrorist training materials. Feinstein wrote to the FCC seeking clarity about the apparent “confusion among at least some broadband providers.”

“I find it hard to believe that they’re confused on this issue,” said Aaron. “Their interest isn’t in using that power to help law enforcement, which they can already do, with a warrant hopefully. Their interest is in exploiting it commercially. And they want to be able to take all of this data, use it however they want. They want to be the gatekeepers and they want the internet to work like cable television, which is the model they’re used to.”

It could be argued that the removal of net neutrality would actually compromise national security. A well-funded foreign adversary, such as Russia, could put its content into “fast lanes,” whereas a small grassroots organization of American citizens might not have the same financial resources and could end up in the slow lane, impairing their influence.

Although activists are concerned about Pai’s conflicts of interest, Pai joked about the matter at the FCC’s annual gathering. “In collusion—I mean, in conclusion, sorry, my bad—many people are still shell-shocked that I’m up here tonight,” he told the crowd. Pai then introduced what was intended to be a comedic video, in which a Verizon executive tells him, “We want to brainwash and groom a Verizon puppet to install as FCC chairman.” In this skit, Pai eagerly agrees.

Aaron noted that Pai is raising his profile and could seek higher political appointments. “If the backlash goes the other way, he’s still really well-positioned because he’ll have his pick of industry jobs,” he said.

When asked about the FCC vote tomorrow, Aaron said, “I don’t think what happens on Thursday is going to be the last word in this debate, and I know it won’t, because we’re going to court. There’s going to be a Congressional play.”

David Pring-Mill has written extensively about technology and its political implications. His articles have appeared in The National Interest, Singularity Hub, DMN, Datanami, and other outlets.