The True Danger of the North Korea Crisis: It Could Cost America Its Allies 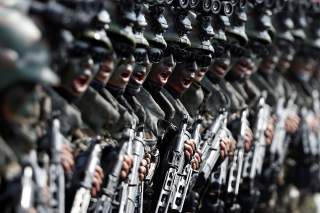 Tough North Korea rhetoric from the U.S. administration continues. Major South Korean media increasingly talk as if U.S. air strikes are likely, and the expert community seems increasingly resigned to them as well. Despite constant criticism of his incendiary language, President Donald Trump continues to suggest that major action against North Korea is imminent—most recently by suggesting that we are now in a period of ‘calm before the storm.’

I have argued in these pages that such strikes would be an enormous risk. We do not know what the North’s redlines for retaliation against such a strike are. We do not know if the strikes would so unnerve the North’s elites that war was next, that they would respond with enormous force, possibly including nuclear weapons. An expert study of this scenario suggests appalling casualty numbers. We also do not know what China’s thresholds are for intervention. China is treaty-bound to help North Korea if it is attacked. It may not, but if a U.S. air strike against North Korea spirals into a major conflict, then the likelihood of Chinese intervention rises.

It is also worth noting that even if the Chinese and North Koreans do not respond to air strikes, North Korea will almost certainly deploy human shields as soon as the bombs start to fall. And the North has so many targets that the United States would like to hit, that any ‘air strike’ would look a lot more like a major air campaign and not a quick ‘surgical strike,’ as in Syria earlier this year. An air campaign against sites with human shields means a high civilian death toll. The North Koreans will not make this easy for us at all.

White House officials, most importantly Secretary of Defense James Mattis, continue to suggest that diplomacy is the preferred outcome. And there are options to continue to buy us time against the North Korean nuclear and missile programs: missile defense, sanctions, continuing to cajole China to push North Korea harder and so on. Nevertheless, the pressure to something dramatic regarding North Korea is rising. If war is inevitable—it is not, but for the sake of the argument—it is better to fight now, before they have more weapons, and before those weapons can more evidently strike the continental United States. Even Kim Young-sam, South Korea’s president at the time of the 1994 nuclear crisis, has retrospectively regretted his decision not to strike then.

President Kim’s veto of the strike at the time blocked U.S. action. This question is now returning as Trump raises the rhetorical heat on Pyongyang. And this time, it involves Japan too, as it is now in range in range of North Korean missiles, and likely nuclear missiles. Japan has already practiced civil defense drills. But if the United States were today, as in 1994, to extend an, albeit unspoken, veto to South Korea, and now Japan too, war is unlikely. They do not want it.

Americans may feel incensed at having to get ‘permission’ from others to act. Trump is unlikely to feel such commitments. And hawks may suggest that because North Korea can hit the United States, we are threatened too and therefore no longer require allied permission. Nevertheless, there are strong national interest reasons, if not moral ones, to once again solicit allied approval.

First, it is South Koreans and Japanese who will bear the brunt of any North Korean retaliation for a U.S. strike. Yes, North Korea can, perhaps, now strike the U.S. homeland, but the North’s ability to devastate the United States is significantly lower than its ability to damage South Korea and Japan. If we are going to drag South Korea and Japan into a war that could result in hundreds of thousands—or even millions—of their casualties, plus irradiated blast zones, refugees, and the possibility of state collapse, we should at least get their permission. It would be staggeringly immoral, and an astonishing act of callousness in American history, if U.S. action led to nuclear use against South Korea and/or Japan without their permission. The British referred to this problem in the early Cold War as ‘annihilation without representation’—the Americans might go to war with the Soviets over the heads of NATO, but the NATO states would be destroyed in the cross-fire.

Second, if this normative argument is unpersuasive, then consider the impact on U.S. national interests if allies around the world saw the United States sacrifice, or risk sacrificing, South Korea and Japan without even soliciting their approval. This would end pretensions that U.S. hegemony is liberal or benign. It would destroy allied trust that the United States considers their interests too. It would appear as if Washington were using allies instrumentally as shields or buffers to absorb enemy fire. That is akin to why the Soviet Union did not leave Eastern Europe in the late 1940s—to serve as a buffer against the West and a locus for the next war, rather than inside the USSR itself. This was yet one more reason for the Warsaw Pact states to exit the alliance as soon as they could. It is similarly likely that America’s alliance system would collapse if the United States risks major, perhaps nuclear, conflict without allied consent but fought on their soil. Trump’s advisors likely realize this; does the president?