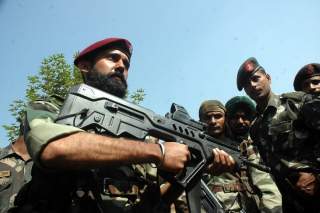 India has two great, ancient epics that saturate its civilization, much like the Bible and Shakespeare in the West: the Ramayana, and the Mahabharata. The Ramayana is simpler in structure and focuses on the ideal reign of a single ruler, Rama, who has traditionally been the model for political authority in South and Southeast Asia. On the other hand, like the Bible or Herodotus’ Histories, the Mahabharata describes a multitude of political and military situations from many perspectives. This makes it a broad, useful compendium of strategy, rather than just political authority, that was widely accessible to anyone throughout Indian history. Since it was composed around 400 B.C.E. (possibly loosely based on events that happened around 1000 B.C.E.), its contribution to the Indian worldview cannot be understated, not just as a story or religious text, but as a strategic text that has influenced Hindu, Sikh, Buddhist, and even Islamic states in South Asia. Indeed, it offers a central—and often overlooked—case for realism in foreign affairs.

The Mahabharata is considered an itihasa, or history in the Indian tradition—epics meant to narrate tales of bygone days as lessons. Exemplars derived from this text are found everywhere in India today. For example, a recent article in an Indian newspaper, the Hindustan Times contained the following analogy from the Mahabharata: “When the Kauravas refused to part with five villages, they had to lose the entire kingdom,” in reference to the Nepalese government’s refusal to grant more autonomy to its southern region. The analogy refers to an incident in the Mahabharata in which the Kauravas, a group of aristocratic cousins seize the kingdom of their cousins, the Pandavas, for a period of 13 years during which the Pandavas are exiled. After they return, the Pandavas made it known that they would settle for only five villages instead of their whole kingdom, but this offer was refused by the Kauravas, thus leading to war and the destruction of the Kauravas. The strategic lesson of this episode is that it is sometimes necessary to give way a little in order to hold onto larger gains. Another article, in the Hindu, wrote that Indian Prime Minister Modi needed to break through the chakravyuh—an almost-impenetrable, wheel-like formation used in the war in the Mahabharata—of the bureaucratic, legally complex Indian state in order to reform its structures and economy. Like the chakravyuh of the Mahabharata, the Indian state was designed to last as a socialist state through being structured as a multilayered maze, and as in the epic, most politicians get trapped in this maze without being able to reform it.

The previous analogies are but a taste of the strategic richness and wisdom of the Mahabharata, stories known to just about everyone in India. Briefly summarized, the Mahabharata is the story of the political rivalry between two sets of cousins, the Kauravas and Pandavas. Their dynastic dispute ensues because the father of the Kauravas was denied the throne of the kingdom of Hastinapura despite being the eldest male heir due to his blindness; the throne went instead to his younger brother, the father of the Pandavas, who died early, leaving his brother as regent. Confusion thus arose as to which branch of the family had a rightful claim to the throne, eventually leading to the kingdom’s partition, the exile of the Pandavas from their kingdom after its seizure through gambling by the Kauravas, and finally an epic war in which the Pandavas destroyed their cousins and reunited the kingdom. The epic is sympathetic to the Pandavas because they are portrayed as being righteous and not motivated by an arrogant desire for power.

The three main strategic thinkers in the Mahabharata are Krishna, the Pandavas’ cousin and a divine avatar, Shakuni, the Kauravas’ cunning uncle, and Bhishma, the “grandsire” of Hastinapura, great-uncle to both sets of cousins. While Shakuni and Krishna share a commitment to realism and using whatever means possible to achieve their goals, they differ in one important respect. Shakuni advises his nephew, the leader of the Kauravas, Duryodhana to acquire land and wealth for the sake of his own prosperity, glory and power, while on the other hand, Krishna argued that the ends of establishing a righteous state justified the means in achieving them. He thus combines two ideas often seen at odds in the West, “the ends justify the means” and “do your duty.” While doing one’s duty can often be constituted as an appeal to playing by the book or following chivalry, Krishna defines it the focus the warrior or ruler must have toward the end goal which is duty toward the greater good, even if this requires deceit.

Indian strategic discourse today widely praises this way of thinking and laments instances in Indian history where the advice of Krishna was not followed because individual honor led to disaster. One notable example occurred during the invasions of India by Mahmud of Ghor (from Afghanistan). Although he was decisively defeated in 1191 near Delhi, his enemy Prithviraj Chauhan let him go, due to “honor,” despite there being a history of Ghorid raids on India’s northwest. The following year, Mahmud of Ghor returned and won the next battle, conquering all of northern India shortly. In the Mahabharata, the Pandavas learn a similar lesson when they let their cousin-in-law go free out of familial ties even though he was caught in an attempted rape of their queen, something for which he should have been punished. This same individual eventually caused the death of a son of one of the Pandavas, single-handedly holding off their whole army for a day. The Pandavas greatly lamented not “finishing the job off.”

Related to this is the need to finish the job off by getting down to the root of the problem. Despite the fact that the Pandavas often tried to compromise with the Kauravas, even to the extent of giving up most of their claims, Krhisna ultimately made it clear to them that they would have to completely destroy their cousins in battle to get rid of the problem for good—not that it hurt in trying for peace before restoring to such a solution. One wonders today if such lessons can be applied against a group like the Taliban, which despite repeated peace offers have only continued to fight and harrash the Afghan state and its allies.

The modern Indian state has not been beyond using this type of “ends justify the means” thinking for its geopolitical benefit, even right after the idealistic period defined by Gandhi. After the British left India in 1947, the remaining princely states not under direct British rule were given the option of joining India or Pakistan. The state of Junagadh, in today’s Gujarat was a majority Hindu state ruled by a Muslim ruler who opted to join Pakistan despite the lack of territorial congruity between the two. In 1948, India promptly invaded and annexed Junagadh anyhow as it did not want a Pakistani exclave on its coast. Yet, a similar situation arose in the state of Jammu and Kashmir where the Hindu ruler of a mostly Muslim state legally acceded to India, despite Pakistani military pressure. India’s claim on the entire region is based on a legalism it deems valid because of Kashmir’s strategic location, while it simultaneously rejected the validity of a similar legalism in Junagadh, also for geostrategic reasons. Although this seems hypocritical, it is in accordance with the strategic teachings of Krishna which subordinates legalism to the national interest. This is not to say that right and wrong don’t matter on the personal level, but that at the national level, actions that may seem wrong are sometimes right.

There is also an idealist tradition to be found in the Mahabharata that has inspired many, although the epic itself spends much effort in refuting this manner of thinking. For example, Mahatma Gandhi understood the text as being a lesson against partition, violence, and war; its description of these events was an argument against their repetition. Yet, Bhishma, speaking in the epic itself, expresses a very different, non-Gandhian sentiment, arguing that anyone who “acts inimically” a kingdom should be slain, be they friend or foe. Eschewing idealism for realism is a lesson that the Mahabharata drives home again and again.

The eldest Pandava and heir-apparent to the throne,Yudhisthira, is the most idealistic, proto-Gandhian character in the epic. He frequently exhibited an unwillingness to fight for his rightful throne or slay his relatives. Even after winning the war, he felt a great amount of guilt, and wanted to renounce the kingdom as penance. His brothers attempt to bring him to his senses with realistic advice that perhaps explains why both today’s India and historical Indian states pursued power and wealth just as much as other states despite the parallel Indian spiritual tradition of renouncing desire, violence, and wealth. One brother, Arjuna, argued that pursuit of wealth was justified, including that acquired in war, and that dharma (righteousness), pleasure, and heaven result from riches. According to him, all things flow from riches, including the security of the people and the state.