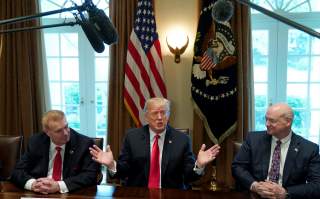 Should anyone really care about the China tariffs “announced” yesterday. Yes and no. Nothing was actually announced yesterday, and there remains a tremendous amount of uncertainty surrounding the whole affair. But there will be consequences for the U.S. economy and the investment landscape.

What did we learn on March 22? Relatively little. There were few details, and the process of getting from announcement to implementation is arduous. It will be fifteen days before there is enough detail to make a projection about the potential consequences. Then there will be haggling and lobbying for thirty days, and those efforts are certain to change at least some of the outcomes. In the end, it is certain the United States will place tariffs on Chinese goods, and there will be retaliation. That is all that is known at this point.

For background, Section 301 is a trade rule that allows a president to take significant unilateral action against countries deemed to “unjustifiable or unreasonable tariff” or other trade restrictions. The critical aspect of a Section 301 investigation is that the available remedies are wide-ranging.

After all, the language reads, “the President... may impose duties or other import restrictions on the products of such foreign country or instrumentality, and may impose fees or restrictions on the services of such foreign country or instrumentality, for such time as he deems appropriate.” There is no need for the president to consult Congress, but there is the requirement that the president allow for offenders to seek a remedy.

There are issues that the United States and China can find common ground on in trade including steel. And there are numerous other areas as well. For instance, last summer following a meeting between President Xi and President Trump, China offered to be more open to U.S. beef exports.

There remains the possibility this is the starting point for a “threaten-to-negotiate” style of trade tariff, similar to the recent steel and aluminum tariffs that appear to be targeted at gaining an upper hand in NAFTA negotiations. But these are on a much larger scale, and China will retaliate—they have said as much.

If it is a “threaten-to-negotiate” tactic being used by the White House to get a leg up in future negotiations, then it is a dangerous game, and it could go very wrong, very quickly. The simplest example is U.S. farmers. One of the easiest ways for China to quickly strike back is to hit U.S. agricultural exports. That will directly affect U.S. farmers who already have volatile economic fortunes.

Simply because there is little in the way of details surrounding what the precise targets of the tariffs will be and when they will be implemented does not mean that some conclusions can be reasonably drawn about the future investment landscape. Some conclusions can also be made about how to avoid potentially getting caught in the crossfire.

According to S&P Dow Jones, China makes up approximately 4.3 percent of S&P 500 revenues. There will be a hit to these, at least on the margin. In terms of style, exposure to China skews toward growth companies (5.6 percent) with value having relatively less (3.8 percent) on the large-cap side. In terms of market cap, the exposure is skewed to large cap with mid and small cap having less (3 percent and 3.5 percent respectively).

China is the largest foreign exposure for U.S. public companies (taken as a whole), but it is by no means a dominant revenue source. The hit to U.S. economic growth will be more consequential for revenues. The least directly affected companies by the China tariffs are small and mid-caps as well as value leaning names.

In the end, the China tariffs will not be pleasant. They will be a prolonged, volatile and difficult to predict. Reactions are likely to be sharp both by markets and China. The question will be whether or not these are, in fact, “threaten-to-negotiate” tariffs or a more permanent feature of the Trump administration’s economic policy. Either way, it is going to be a bumpy ride.

Image: Chairman, CEO and President of Nucor John Ferriola and U.S. Steel CEO Dave Burritt flank U.S. President Donald Trump as he announces that the United States will impose tariffs of 25 percent on steel imports and 10 percent on imported aluminum during a meeting at the White House in Washington, U.S., March 1, 2018. REUTERS/Kevin Lamarque