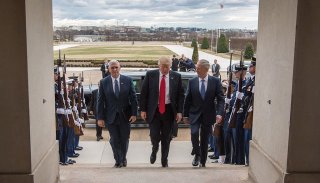 The ancient Chinese philosopher Xun Qing Zi once wrote, “If you do not understand the leader, just look at the ministers by his side and you will find the answer.” Unfortunately, the sage counsel of the Honorable Master Xun is less helpful in attempting to explain the likely course of action the Trump administration will take in charting the future direction of U.S.-Russia relations. One cannot help but be struck by the contradictory and competing messages emanating from the Trump White House. In particular, the chief executive’s personal preferences and apparent enthusiasm for finding ways to improve U.S.-Russia relations by searching out areas of possible cooperation and reducing areas of disagreement are not reflected by senior members of his hand-picked national security team, who remain far more cautious and tentative.

In his first face-to-face meeting with Foreign Minister Sergei Lavrov, Secretary of State Rex Tillerson was far more cautious than the president, noting that the United States would “consider working with Russia where we can find areas of practical cooperation.” Speaking to his NATO counterparts, Secretary of Defense Jim Mattis also threw cold water on proposals for joint U.S.-Russia activity, notably in Syria, noting that the United States was “not in a position right now to collaborate” with Russia in such matters. It is true that all senior officials repeat assurances that the United States seeks better relations with Russia but, as some observers have wryly commented, the talking points utilized by many U.S. government officials—both civilian and military—appear to be unchanged from those used during the Obama administration.

Concern, of course, is heightened when other interlocutors with the U.S. government—not only the Kremlin, but other regional actors, allies and partners—must seek to discern what the intentions of the new administration will be. This highlights a concern that I pointed as an area the new administration would need to address in shaping its national-security team in the past issue of the National Interest: who, after the president himself, is authorized to speak in the president’s name and with the president’s voice? On his recent trip to Europe, for instance, Vice President Mike Pence made it clear that, in conveying U.S. support for the transatlantic alliance, he was doing so on behalf of President Trump—but those assurances apparently continue to be doubted by some of his European audience. They point to clear themes sounded by then-candidate Trump on the campaign trail that suggested he saw Russia as a potential partner in combating terrorism, and was wary of so-called allies that leeched off the United States for their defense needs.

Statements made by Pence, Mattis, Tillerson and other senior members of the national-security team continue to emphasize America’s enduring commitments to its European allies, including those in the Baltic states and eastern and central Europe; reiteration of the Obama administration’s stance that Crimea remains a part of the territory of Ukraine; and continued description of Russian activity around the world as aggressive and destabilizing. No one has endorsed a new approach, or any sort of twenty-first-century version of the Congress of Vienna. At the same time, monitoring the political winds in Congress, where Russia skepticism is one of the few truly remaining items of bipartisan consensus, the political team may well advise the president not to stake his political capital on the Russia account, or run the risk of having Congress hand him a major blow to presidential prestige by legislating Russia policy. This seems to set up one of three possibilities for U.S. policy going forward.

The first is that, despite their personal views on Russia, Trump’s team, in the end, is prepared to carry out the wishes of the president. It is not uncommon for senior officials to disagree with the president and with each other on policy options, but still remain loyal to the chief executive, and execute his plans and strategies, once he has made a decision. After all, despite vigorous and heated debates over the surge in Afghanistan and whether to intervene in Libya and Syria, no senior Obama administration official who was on the losing end of those policy debates resigned or stepped down. Similarly, if President Trump has a positive and productive face-to-face encounter with President Putin later this year, where both men rapidly come to agreement on a set of vexing issues, Trump will win over or mitigate his team’s preexisting skepticism.

The second is that these officials believe that, once exposed to the same sets of facts and analyses that they possess, the president will come to view that some of his positions on Russia were naive and unformed—and, over time, he will begin to agree with their harder line on Russia and on Putin. He may do so out of real conviction, or because he has calculated that other, more important parts of his domestic- and foreign-policy agenda will be negatively affected by fighting their counsel on Russia, which will also enjoy significant backing among the permanent bureaucracy and the U.S. Congress. Thus, under this scenario, U.S. policy towards Russia falls back towards the parameters set in the second terms of the George W. Bush and Barack Obama administrations, with no major breakthroughs towards improvements in relations.

The final option is that the president comes to believe that the “Washington establishment” is incapable of new, fresh or creative thinking on Russia, and so Trump turns to people outside of government to create separate channels to connect to Putin and the Kremlin and to provide him with advice and ideas. All presidents, to some extent, have maintained such connections—recall the consternation in the U.S. government when it became known that author and historian Suzanne Massie was providing counsel on Russia directly to President Ronald Reagan. But Trump’s network of CEOs and worldwide business associates provide him with a rolodex of people who could easily serve in the role of unofficial presidential emissaries and counsel. In addition, for people who believe that they would be blocked by the normal gatekeepers in Washington, the Trump network may provide different points of access. The whole story of the Cohen-Artemenko peace plan for Ukraine contains all the elements that this option would entail: an unconventional approach to a pressing security problem, nongovernmental players, and an attempt to access the president directly while circumventing the normal procedures of the U.S. government. While it does not appear that the president himself initiated or supported this endeavor, might it be an approach he considers in the future? If so, would the president be prepared to forge ahead even at considerable political cost? And what would be the impact on the cohesion of his administration?

All of this speculation remains premature until we know who the administration will select to oversee the day-to-day parameters of the U.S.-Russia relationship: a senior director at the NSC; the relevant assistant secretaries; and ambassadors not only to Moscow but to the EU, NATO and other key European capitals. Will Russia policy be one of those areas Trump will want to retain direct and immediate operational control over? Or will he accept that his national-security team will handle these matters for him? We should know more in the coming weeks.

Image: Donald Trump, Mike Pence and James Mattis walk up the steps of the Pentagon. Wikimedia Commons/Secretary of Defense