The Trump Doctrine: Fire At Will 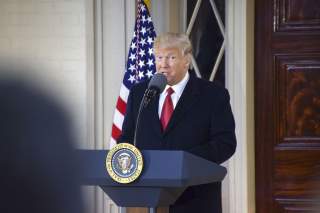 Hillary Clinton announced on Thursday in New York that the Trump administration should “take out [Assad’s] airfields.” It’s starting to look as though the Trump administration is acting on her foreign-policy stands, at least if you take seriously Trump’s professions about why he needed to launch his humanitarian intervention in Syria against Shayrat Air Field last night. Trump spoke of “beautiful babies” killed in a “barbaric act.” And in recent days, the knees of Trump’s advisers such as Secretary of State Rex Tillerson have started to go wobbly. Only a few days ago, Tillerson and other Trump officials were giving their benison to Syrian dictator Bashar al-Assad. He could, they said, remain in power, and his fate would be “decided by the Syrian people.” No longer. Now Tillerson says it’s time for the old boy to leave power.

Russia is ensconced militarily. Iran-backed militias are on the offensive. There is no sign of a potent anti-Assad coalition. And Turkey continues to maintain a wary eye on the Kurds. Given the complexity of events in Syria, any American foray into the conflict would have to proceed on the basis of a careful and credible plan. Trump’s volte-face, however, suggests that there is none. The Trump doctrine that is emerging is not one based on military exigencies or anything as mundane as a strategy. Rather, this doctrine is based on the impulsive and hawkish and unilateral exercise of American firepower, whenever and wherever Trump pleases. This is a foreign policy, in other words, based on Trump’s mood of the moment, as feckless as it is reckless.

For all the solicitude Trump is voicing for Syrians, he continues to move to ban them from entering the United States. Nor is this all. Trump’s actions also come as a welcome short-term distraction from his domestic Russia woes, a number of which he has helped to create with his ham-fisted efforts to disrupt the multiple investigations of his campaign and Russian hacking. He’s already earned the kudos of Sens. John McCain and Lindsey Graham. For now, his little bombing campaign is unifying a fractured GOP behind him, apart from a few dissenting voices such as Sen. Rand Paul, who observes that the strikes will change nothing in Syria.

Meanwhile, the Wall Street Journal editorial page is urging a wider campaign of regime change. It wants Trump to slip down the slippery slope as fast as possible. The program it outlines includes destroying Assad’s entire air-power infrastructure, then creating safe zones inside Syria. “This,” we are told, “would be enforced by U.S. and allied air sorties plus renewed military supplies for the opposition.” In the print edition, the Journal added that Russia should “stay away from Mr. Assad’s airfields or suffer the consequences.” Russia, which has pulled out of the de-confliction agreement with Washington, is most unlikely to follow the Journal’s suggestion. Just how America is supposed to deal with extensive Russian air defenses is left unsaid, but perhaps the Journal thinks they can be liquidated with no retaliation. Here we are once more in the fairytale land of the cakewalk to victory promised in 2003 in Iraq.

Such an ambitious program might have been viable before Russia intervened in Syria. President Obama, who is looking like more of a realist than Trump, chose not to run the risk. He had already succumbed to the siren call of the interventionists in Libya in March 2011. Five years later Obama admitted that it was the “worst mistake” of his administration. The Europeans, who went to war with Obama, know that Syria is a far more daunting problem. German chancellor Angela Merkel simply noted that Trump’s decision to bomb was “understandable.”

Apart from the geopolitical implications, Trump is also courting trouble at home. He managed to cobble together a base that, for all his rodomontade about winning a decisive victory over Hillary Clinton, barely put him over the top. His hard-core followers aren’t swallowing hard at his turnabout; rather, they are indignant at what they see as his flagrant hypocrisy. In Politico Ben Schreckinger astutely notes, “Trump risks losing the segments of his base that flocked to his isolationist, ‘America First’ message.” The truth is that Trump was playing something of a double-game during his campaign. He sounded isolationist notes, but the basso ostinato was rather different. He made it very clear that he would embark upon a massive buildup of military power that would target Iran and China. Mix in Trump’s uniquely impetuous temperament and add in his current team—H. R. McMaster as national security adviser and James Mattis as defense secretary—and you have the resurgence of the hawks.

Will North Korea be next?