The Trump Doctrine: Peace Through Strength 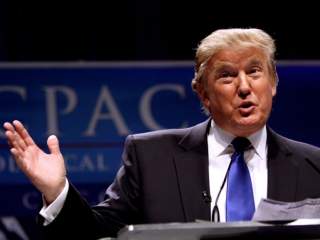 Those who insist Donald Trump has no foreign policy are simply not listening. The “Trump Doctrine” is a page right out of Ronald Reagan’s playbook: peace through economic and military strength.

Trump knows the key to keeping America safe in an increasingly dangerous world is to “make America great again” through economic renewal. America must have the fiscal firepower to end Pentagon’s budget sequestration in order to fund the military the U.S. needs for adequate defense. Cutting the corporate tax rate and cracking down on unfair trade practices to increase America’s GDP growth rate are just as demonstrative of national might as the F-35. Here is how President Trump would use a newly empowered economy and military confront our rivals abroad:

The best way to kill ISIS is to cut off its own financial head in two ways: first, target any oil fields that it may be using as a cash register and “follow the money” through the Internet and expropriate it. Trump is probably aware of Nietzsche’s admonition to beware that “when fighting monsters, you yourself do not become a monster.” Trump also knows that when you are facing an enemy willing to bomb your sons and daughters and behead prisoners, you must strike equal fear into the heart of that enemy. Under a Trump Administration, no ISIS member will be safe, the cells of Guantanamo will be fuller, and America will be safer.

Trump believes, as the strange bedfellows of Saudi Arabia and Israel are wont to do, that the Obama administration has made a terrible deal with Iran. Removing sanctions will allow this fascist, terrorist state to restore it economy and continue to develop capabilities to deliver nuclear warheads as near as Riyadh and Tel Aviv and as far away as Brussels and New York. President Trump will abrogate that deal the day he takes office. As commander in chief, he will exert both economic and military pressure on Iran, our quasi-enemy that has pledged to destroy Israel and dreams of ruling a new Middle Eastern caliphate. As far as Israel is concerned, however, Trump appears to regards this democratic state as America’s most important ally in the Middle East. But Trump, along with most Americans, disagrees with hardliners who insist there can be no deal brokered between Israel and the Palestinians. A deal is possible, but you cannot have peace unless you are willing to negotiate.

From Russia, With Revanchism

Trump recognizes Vladimir Putin for the clever, ruthless, charismatic leader that he is. Putin has run strategic circles around both America and its NATO allies when it comes to Russia’s military intervention in Crimea, Ukraine, Syria, and former Socialist Republics like Georgia and Latvia.

Putin recognizes Trump as a strong and fearless leader who will draw clear red lines in Europe and the Middle East that Putin dare not cross. This is a far better and safer situation for America than a status quo Russia policy that leads from behind and inspires far more contempt from Putin than respect.

Trump will no longer tolerate a mercantilist China having its way with America’s factories and jobs. He will firmly crack down on unfair trade practices like illegal export subsidies, currency manipulation, and intellectual property theft and bring American jobs and factories home.

That’s not just good trade policy—it’s good foreign policy, too. China’s rapidly advancing military strength has been its ability to economically grow much faster than its strategic rivals. In other words, by rebalancing trade between the US and China, Trump will also rebalance the military equation in America’s favor.

Sharing the Burden of Defense

Trump has made headlines about revamping America’s alliances—from NATO to our allies in Asia. Trump knows the problem here is not that these alliances are not useful to the defense of the American homeland. Rather, Trump is tired of the U.S. having to pay the lion’s share of the bill to protect wealthier nations unwilling to spend the requisite funds to defend their own homelands. Consider that while the U.S. spends fully 3.5 percent of its GDP on defense, Japan is at a measly 1.0 percent, Germany is at 1.1 percent, and even South Korea, with an absolute madman on its border contributes a measly 2.6 percent. As president, Trump will demand a better deal for American taxpayers.

In laying out his Trump Doctrine, Trump has assiduously avoided surrounding himself with a large circle of advisors. He has done so because he has “off the record” access to a broad distributed network of experts around the world—as well as an inner circle that stays out of the limelight. From his own detailed foreign policy research over many years—required due diligence to conduct business globally—Trump has developed a strong aversion to the kind of “nation building” that dragged America into wasted and protracted wars in God-forsaken killing fields like Iraq and Afghanistan. Accordingly, Trump has promised the American people – he will not be shedding the blood of any American soldier either in vain or under the vanity banner of American Exceptionalism. This is how Trump is in tune with the American public that is both tired of war and ready for the new era of prosperity that will usher in peace founded on true American power.

Peter Navarro is a professor at the University of California-Irvine. He is the author of Crouching Tiger: What China’s Militarism Means for the World (Prometheus Books) and director of Death By China, a documentary history of China’s entry into America’s markets. Contact www.crouchingtiger.net.