The Trump-ification of Ted Cruz 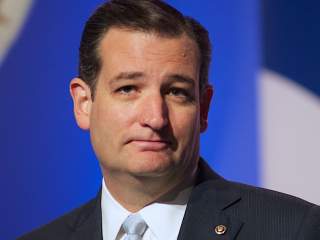 Once upon a time, Ted Cruz was a Tea Party conservative.

The Texas senator was difficult to place on the right’s increasingly cluttered ideological spectrum, at least beyond that elastic classification. It was, however, very clear what he wasn’t: not a big spender, not a neoconservative nor an establishment patsy. He loathed government waste, Obamacare and, that most irresistible of punching bags, the establishment. While he placed himself firmly in the talk radio-amplified conservative mainstream, his antigovernment stances also gave him a whiff of libertarianism, even if it wasn’t as pungent as Rand Paul’s. He was a product of the Tea Party and its efforts to steer the GOP towards a smaller state.

All that seems like eons ago. Today, Ted Cruz is running for president. The conventional wisdom is that he’s a Consistent Conservative while his main opponent, Donald Trump, is a grab bag of conflicting positions. That isn’t entirely true: Cruz may not fluctuate as often as Trump, but his policies have shifted in acknowledgment of Trump’s role in the race. Call it the “Trumpification” of Cruz—and it’s becoming increasingly noticeable.

Above all, Cruz has sought to coopt some of the rage sparked by Trump over trade and immigration. It began last summer when he made an about-face on granting fast-track authority for the president to negotiate the Trans-Pacific Partnership, lining up with Trump, Breitbart.com, Laura Ingraham, and other right-leaning pundits who were skeptical of another trade deal.

“TPA in Congress has become enmeshed in corrupt Washington backroom deal-making,” he thundered. That’s certainly not an invalid criticism (although deal-making is a prerequisite to making a trade deal), but it contrasted with a Wall Street Journal op-ed he’d co-written with Paul Ryan only two months earlier that defended fast-tracking. Clearly, Trump labeling the TPP as “pathetic” and “bad” had left its mark. By the umpteenth Republican debate a couple weeks ago, Cruz was declaring that “We’re getting killed in international trade” and “We’re driving jobs overseas.” That doesn’t quite amount to Trump’s flamboyant protectionism, but it’s a nod to it.

Cruz has always been a hawk on illegal immigration. But when he called for fewer H1B visas earlier this year, it was a clear emulation of Trump, and a flip-flop that he admitted to. Likewise, Cruz has followed Trump into the dark waters of anti-Islam suspicion, refusing to criticize the front-runner’s ban on Muslim migration and more recently calling for police to do special patrols of Muslim neighborhoods. That last one is especially curious: Dearborn is not Molenbeek, and America’s radicalized individuals are not Europe’s radicalized districts.

Under pressure, Cruz has also curtailed his once-nuanced foreign policy, which had been influenced more than a little by Rand Paul. Trump is hardly the most hawkish Republican to ever run for president—exhibit A: his NATO bashing; exhibit B: Jennifer Rubin’s daily fits—but he does dish out piping hot rhetoric on the Islamic State (“cut the head off”), the war on terror (“take out their families”), waterboarding (“torture works”), and Edward Snowden (execute the “traitor”). Consequently, Cruz has pledged to “carpet bomb” terrorists. And whereas in 2013 he said that Snowden had likely performed a “considerable public service,” he now thinks the whistleblower should be “tried for treason.”

So when Cruz announced his foreign policy team earlier this month and it included Frank Gaffney of “Grover Norquist is a Muslim operative” fame, the pandering transformation was complete. Cruz has always been friskier on the specifics than, say, Tom Coburn. But lately he seems consumed by mixed signals, flip-flops and cunningly vague statements to be filled in at a later date.

For an example of the latter, take his positions on torture. It’s “wrong, unambiguously,” he declared in December 2014; the only candidate to say so, his comments won praise. Less than two months later, he conveniently decided that waterboarding isn’t torture. So what was he referring to the first time around? The time the CIA made a detainee listen to the Bee Gees? Because everyone already agrees that was an unconscionable trampling of the Eighth Amendment.

If Cruz were a political cartoon, he’d be on a unicycle pedaling frantically while juggling pins labeled “evangelicals”, “libertarians”, “national security hawks” and “populists.” It’s understandable that he wants to behave delicately in this turbulent campaign, and in his defense, his strategy has gotten him as close to Trump as one could expect. But he’s clearly playing it loose with his positions, as did Mitt Romney and John Kerry before him. How much longer can that continue before the public questions his trustworthiness?