The Trump-Putin Meeting: No More than Baby Steps 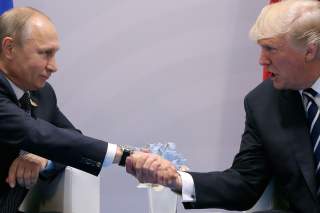 Donald Trump and Vladimir Putin were scheduled to meet for only about thirty minutes, but they remained closeted together for over two hours today on the sidelines of the G-20 summit in Hamburg, Germany, the first face-to-face meeting of the two presidents, even longer than the ninety minutes that George W. Bush and Putin had during their initial meeting. After the marathon session ended, Vladimir Putin indicated that an entire range of topics—Ukraine, Syria, counterterrorism, cybersecurity and the question of Russian interference in the 2016 U.S. elections—was covered. The tone was friendly from the outset—“it’s an honor to be with you,” Trump enthused as they first met—and the body language between the U.S. and Russian leaders throughout the G-20 meeting, displaying signs of friendly camaraderie, is in marked contrast to the often stiff and tense poses that characterized meetings between Putin and Barack Obama.

This suggests that in discussing what remain very contentious issues in the U.S.-Russia relationship, the two presidents took the position that major policy differences were not going to be personalized. What remains to be seen, however, is whether personal connections can overcome the considerable bureaucratic resistance on both sides to an improved relationship. Putin seemed to suggest that ongoing contact between the two heads of state is the best way to move the relationship forward.

To try and create the impression that the first direct encounter between the two leaders could lead to positive outcomes, Foreign Minister Sergey Lavrov announced that the United States and Russia had brokered a cease-fire in southwestern Syria, set to take effect next week, between U.S.-backed opposition groups and the Syrian government. Whether this agreement represents a new, substantive breakthrough in U.S.-Russia cooperation on Syria is not yet apparent, since this agreement could go the way of past arrangements that Lavrov had negotiated with John Kerry, then secretary of state.

At the same time, Trump can now answer his critics, particularly congressional Democrats, by checking off the box that reads “brought up election interference.” Secretary of State Rex Tillerson called it a “robust” exchange. Given the amicable nature of the encounter, however, it seems highly unlikely that the president read his Russian counterpart the proverbial riot act or threatened harsh punishment. More likely, given the relatively mild Russian response to Trump’s speech delivered on Thursday in Warsaw, which contained lines about Russia’s “destabilizing” activities in Syria, Ukraine and other parts of Europe, Moscow had already decided that it would revert to a time-honored Cold War practice of allowing Trump to make certain statements decrying Russian interference and Moscow’s policies in Ukraine and Syria “for the record,” and to, in essence, ignore them.

So what happens now?

At Trump’s apparent request, the meeting was kept small: the two presidents, their translators and the two “chief diplomatic officers” Tillerson and Lavrov, in contrast to a Russian preference for including more individuals from both the American and Russian delegations. Whether this was Trump’s reaction to leaks prior to the meeting that suggested that the U.S. national security establishment was worried about Trump meeting with Putin and wanted him to be supervised (the Daily Beast even ran a story before the meeting, citing an anonymous senior White House official who in effect undermined the president by declaring that “the idea is to get as many adults in the room as humanly possible”); or because of concerns that a larger U.S. delegation would reveal divisions on how the United States ought to be approaching Russia; or because Trump wanted to be able to take his own measure of the Russian president without having an overly formal and cumbersome meeting process, it does mean that some of the key people who will need to handle the day-to-day supervision of the U.S.-Russia relationship were not present and not party to any of the discussions.

Does it mean that Trump and Putin hope to set up a direct channel, or will the Hamburg meeting, like so many previous direct encounters between U.S. and Russian presidents, end up having no real lasting impact on the relationship? In some important ways, this meeting parallels the G-8 encounter between Putin and George W. Bush in 2007, also in Germany (in this case, in Heiligendamm), which was followed by the so-called “Lobster Summit” in Maine: very positive and friendly interactions between the two leaders, but with almost no discernible impact in terms of substantive contact between the two countries’ national-security establishments, and no ability to reach consensus positions—in some cases, on issues like missile defense—that still continue to bedevil the relationship. I myself do not foresee any resurrection of the Bilateral Presidential Commission or any mandates to force and compel the Russian and American bureaucracies to work together, nor any sign that we have a basis for workable compromises on the issues that continue to divide Moscow and Washington.

Putin may hope that in the coming months, Trump will put the 2016 election matter behind him and, as he continues to staff the government, be in more of a position to deliver on the promise of improved relations. Certainly, the biggest takeaway, from the Russian side, is likely that the Hamburg meeting represents a “honeymoon extension” for the Trump administration: that Moscow is not going to foreclose just yet on the prospects that it might be possible to work out some deal with the Trump team. However, as I noted several days ago, Russia is preparing its version of a “Plan B” if those expectations pan out.

All of the hype about the Hamburg encounter also creates illusory expectations that major developments happen in 120-minute encounters between leaders. Some of the more extravagant commentary from the U.S. side even suggested that, in a matter of minutes, Trump might effectively disband NATO, concede the Middle East to the Kremlin and bless the restoration of a Russian sphere of influence from the Vistula to the Pacific. Please. All of this ignores all of the relatively mundane work of building up the foundation for a national-security policy. A Putin-Trump handshake and backslap in Hamburg must still be ranged against commitments found in U.S. law and myriad policy directives that are guiding U.S. actions—from training Ukrainian forces to deploying new units in eastern Europe to continued U.S. flights over Syrian airspace.

Yet we tend to focus on these media moments. Consider how the Bush-Putin summit in Slovenia sixteen years ago was supposed to mark a qualitative shift in U.S.-Russia relations, and how, from our vantage point today, how little has changed.

Contrast this with the slow, steady and incremental changes that have occurred in the China-Russia relationship. In 2001, who would have predicted that there would now be joint Chinese-Russian naval drills in the Mediterranean and the Baltic, or that China would have surpassed Germany as Russia’s most important trading partner?

The Hamburg meeting was an important first step—but no more than baby steps in the direction of easing the tensions between Washington and Moscow.

Nikolas K. Gvosdev is a contributing editor at the National Interest and a professor of national-security studies at the U.S. Naval War College.