The Trump Team Is Underestimating the Power of Democracy 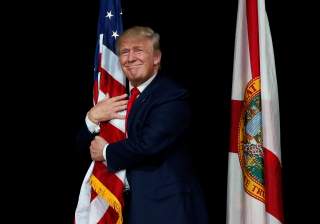 One year ago, at the start of the Trump presidency, we argued that if the administration’s goal is truly to “Make America Great Again,” then it would be a mistake for the United States to abandon its long-standing support of democracy abroad.

Now, only twelve months later, we are deeply concerned to see America’s “greatness” visibly diminished by the continuing erosion of democracy both at home and abroad. Respect for the United States has plummeted globally, as shown by recent international polling.

Furthermore, our own system of government and those of our closest democratic allies are under systematic attack by foreign adversaries. Yet, instead of providing an effective response, our president dismisses the importance of democracy abroad, talks down our alliances with like-minded countries, and has yet to hold a cabinet session on these threats.

We now have incontestable evidence of Russia’s efforts to undercut democracy in the United States and in several of our longest-established democratic allies. Moscow is also making persistent efforts to weaken NATO and the European Union. Both are democracy-based and have strongly favored our strategic interests for over three generations.

We know that political figures in some allied countries now look to Vladimir Putin as a role model, including Viktor Orban in Hungary. And regression in previously promising post-communist democracies such as Hungary and Poland threatens to undo many of the democratic gains that followed the fall of the Berlin Wall.

In Asia, Xi Jinping continues to tighten autocratic controls inside China and systematically smother democracy in Hong Kong, while attempting to intimidate our traditional democratic allies in the region and distance them from their alliances and economic ties with the United States.

One would have to be either willfully indifferent or lacking in historical grounding not to see the dangerous threats emanating from Moscow and Beijing.

The balance is equally negative on the economic side because this same authoritarian offensive is also threatening the liberal international economic order that the United States and its democratic allies created and have led since World War II. And it is this order that has formed the bedrock of America’s economic prosperity over the past seventy years.

Yet, the president has derided it, just as he systematically ignored or dismissed Russian and Chinese attempts to undercut democracy here and abroad. Instead, he makes it clear that for him the support of democracy abroad is not a goal. To the contrary, he has praised and tried to cultivate autocrats like Putin, Xi and Philippine president Rodrigo Duterte, even as he has distanced himself from many of America’s closest democratic allies.

The new U.S. national-security strategy does name Russia and China as security threats to the United States, and the secretary of defense has stated that great-power threats, and not ISIS, are the main challenge to the United States. Unfortunately, however, the administration’s official strategy explicitly eliminates any mention of U.S. support for democracy abroad. And Secretary of State Rex Tillerson’s removal of democracy support from the State Department’s mission statement, along with his decimation of the U.S. Foreign Service, further weakens this long-established policy.

Yet not all is lost. There are still many important constituencies who believe that supporting democracy abroad is in the U.S. national interest. For example, on Capitol Hill there is strong sentiment in favor of protecting democracy against onslaughts by autocrats. This was demonstrated by the lopsided bipartisan votes in the Senate and the House stripping the president of the right to lift the Russia sanctions without congressional consent.

And, even in the executive branch, some senior appointees along with many career officers quietly agree that protecting democracy remains in our core interest. They continue to operate “under the radar” toward that goal, and thoughtful encouragement from outside of government will enhance their resolve.

Some of this encouragement, along with effective talking points and strategic analysis to back it up, needs to come from the private and nongovernmental sectors. Business and economic thought leaders as well as scholars, policy analysts, and advocates at think tanks and universities are increasingly realizing that the United States will be both less prosperous and less secure if the current dramatic slide in America’s image is not halted, and if the authoritarian offensive is not effectively countered.

For example, in our recent book Does Democracy Matter? eleven experts probed these issues from varied perspectives. Some came to the project from a conservative, Realpolitik point of view; others from a more liberal or values-oriented perspective. In the end, all concluded that, although it is indeed important to refine some of our past strategies and methods, our national security not only permits but requires that the United States continue to support democracy globally.

This bipartisan message needs to be propagated loudly, so as to counter the simplistic isolationist slogans that are currently all too prevalent. And, if this message is presented properly, with clear attention to America’s long-term self-interest, then it will remain persuasive to the American public; it will retain the support of Congress; and it will reinforce those in the executive branch who quietly understand its compelling logic.

Adrian A. Basora is director of the Eurasia Program at the Foreign Policy Research Institute and was U.S. ambassador to Czechoslovakia and then the Czech Republic. Kenneth Yalowitz is director of the M.A. Conflict Resolution Program at Georgetown University, a Global Fellow at the Woodrow Wilson Center and was U.S. ambassador to Belarus and Georgia.