The Truth About Reagan's Prisoner Swap 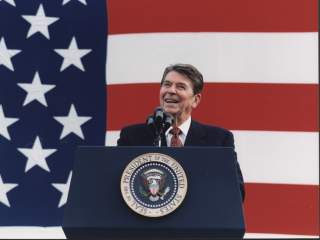 They were like two opening scenes out of a spy movie.

In the first, a man named Gennadi Zakharov strolled into a Queens subway station. Zakharov was a physicist, born in the Soviet Union, who now worked for the United Nations. He was also a Soviet agent. Patient but ambitious, for three years Zakharov had been mentoring a Guyanese student codenamed “Birg” in the ways of espionage. Birg met Zakharov in the station and handed over secret documents, which he’d been paid $1,000 to procure. Never suspecting that Birg was working for the Americans, Zakharov checked the packet for a receipt. He was swarmed by FBI agents and taken into custody.

In the second, journalist Nicholas Daniloff was chatting with his friend Misha on a sylvan lane in Moscow. Daniloff was the son of a Russian émigré who had reversed his father’s trajectory and moved to the Soviet Union as a reporter. He was presently finishing a stint for U.S. News and World Report. Misha gave Daniloff an envelope, which he said contained newspaper clippings, before taking his leave. A van pulled up and ejected six men, who arrested Daniloff and took him back to a KGB colonel. The officer ostentatiously opened the packet. Inside were secret maps and pictures of Soviet soldiers. Daniloff had been framed.

The cases of Zakharov and Daniloff, one a guilty Russian spy and the other an innocent American journalist, both taken into custody in 1986, would become a nettlesome roadblock to negotiations between the United States and the Soviet Union. They would also necessitate a prisoner swap between the Reagan administration and the government of Mikhail Gorbachev, which, thirty years later, bears an eerie resemblance to the exchange between the United States and Iran that brought home four Americans last weekend.

Upon learning of Daniloff’s arrest, the Reagan administration suspected it was a setup to retaliate for Zakharov. Secretary of State George Shultz delivered the American line during a speech at Harvard University. The Soviets, he declared, were guilty of “hostage-taking” and must immediately release Daniloff “in accordance with the dictates of simple human decency and of civilized national behavior.” At the same time, Shultz seemed to rule out any exchange of prisoners to free the journalist.

Then came the indictments. Daniloff was brought up on spy charges by the Soviet Union, and the next day a federal grand jury in Brooklyn indicted Zakharov for espionage. But behind the curtain, both cases were regarded as more headache than spy drama. Reagan and Gorbachev were both angling for another summit to discuss arms control. The Daniloff detainment loomed as an unnecessary imposition.

Nevertheless, tensions escalated. Shortly thereafter, the United States expelled twenty-five Soviet diplomats who worked for the United Nations, accusing them of being spies. The White House denied that Daniloff had anything to do with the dismissal, even though Zakharov had also been employed by the UN. Gorbachev fired back, calling Daniloff “a spy caught red-handed” and implying that Reagan was a liar. The next day, Reagan personally upbraided the Soviet foreign minister. Relations between the United States and the USSR, it seemed, had iced over.

Then, suddenly, a thaw. A spokesman for the Soviet foreign ministry emerged to express hope that “we can find some kind of solution and let [Daniloff] free.” Shultz was heartened by the remark, and a week later held an extended meeting with his Soviet counterpart. The Americans ultimately agreed to free Zakharov, while the Soviets released Daniloff and a dissident named Yuri Orlov. The White House denied this was a direct exchange, fooling no one.

The parallels between the Daniloff affair and the recent swap with Iran are striking. Like Daniloff, one of Iran’s captives, Jason Rezaian, was a reporter. Like Reagan’s agreement, President Obama’s deal seemed unbalanced: he traded prisoners who had been convicted under the law for hostages who had been unjustly seized. Like the Reagan administration, the Obama White House approved the exchange because the prisoners were an unwanted distraction from more pressing negotiations.

And just as Obama has been met with a flurry of vituperation from Republican hawks, Reagan also faced salvos from the right. Congressman Jack Kemp, a presidential hopeful, said he was “troubled by the transparency of trading human lives for Soviet spies,” and his press secretary warned of “accommodationism for the sake of an arms control treaty—any arms control treaty.” Today’s Republican aspirants have leveled nearly identical criticisms at Obama. Meanwhile, conservative columnist William Safire, sounding like a literate Bret Stephens, lit into Reagan for “appeasement,” “retreat from principle,” and “capitulating to Soviet hostage-taking.”

But Reagan was right and his critics were wrong. The United States had bigger fish to fry than a single Soviet agent. Mere weeks after the Daniloff affair was resolved, Reagan got his summit in Reykjavik, where he made his famous stand on the Strategic Defense Initiative, the right battle picked at the right time. There was no witching hour of KGB agents suddenly seizing innocent Americans. And in 1991, the Soviet Union formally dissolved.

Yet today, Reagan is somehow regarded as a progenitor of a hawkish maximalism that dwells on past offenses and refuses to look forward. In actuality, the fortieth president was a shrewd practitioner of diplomacy who made concessions with an enemy far more dangerous than anything America faces today. With Iran’s hostages, WWRD? We can’t be sure, but it would probably look a lot like what Obama did.