The Two-State Solution Is Dead 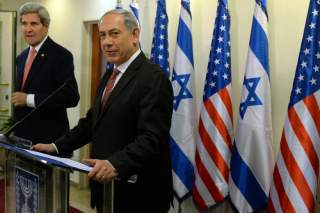 Secretary of State John Kerry’s failed efforts to broker an Israeli-Palestinian “final status” deal highlight American foreign policy elites’ instrumental attachment to a negotiated “two-state” solution as the only acceptable basis for resolving the Israeli-Palestinian conflict.  Israel’s ongoing assault on Gaza, though, underscores a fundamentally different reality:  the two-state solution is dead.  And no matter how much Israel and its supporters object, the reigning paradigm for addressing the conflict is shifting ineluctably from a two-state model to a one-state model.

The two-state solution is the illusory end product of a U.S.-conceived “peace process” that has always been about things other than actually achieving peace—just as, contrary to the conventional trope, the U.S.-Israeli “special relationship” is not really about “shared values.”

From Israel’s declaration of independence in 1948 to 1967—when memories of the Holocaust were fresh and Israel was arguably at its most democratic—America provided it no appreciable military or economic assistance; indeed, Washington barely gave it food aid.  During the same period, there was plenty of fighting between Israel and various Arab parties—yet America did not initiate any kind of “peace process.”

Washington only began providing substantial military and economic assistance to Israel after the 1967 Arab-Israeli War, when Israel showed itself capable of unilaterally defeating and seizing territory from Arab states allied with Moscow.  From Washington’s perspective, supporting an Israeli military that would periodically show up Soviet-supplied Arab opponents was, in a Cold War context, strategically valuable.  After the Cold War’s end, U.S. policymakers continued calculating that U.S.-facilitated Israeli military superiority helped keep the region subordinated.

Likewise, Washington only launched a “peace process” after 1967, to elicit Arab states’ buy-in for what were going to be ever-increasing flows of U.S. weapons and money to Israel’s military.  The process was never meant to constrain Israel and help Palestinians exercise their right to self-determination as part of genuine conflict resolution; it has always been about empowering Israel and subordinating Palestinians and other Arabs as part of an increasingly militarized U.S. sphere of influence in the Middle East.

- In its first proposals, Washington suggested in 1969 that Israel return some of the territories it had conquered to Arab states—but not to Palestinians.

- Henry Kissinger’s 1974-1975 “shuttle diplomacy” sought to give Saudi Arabia political space to break with the oil embargo imposed in 1973 by key members of OPEC.

- To facilitate Egypt’s transformation into a subordinated American “partner,” the 1978 U.S.-brokered Camp David Accords posited a self-governing administrative council for Palestinians, with some recognition of their “legitimate” (but not political) rights.

- As the Cold War ended, Washington was challenged to appear more forthcoming on the Palestinian issue to maintain Arab state buy-in to a heavily militarized, U.S.-led political and security order in the Middle East.  So, at the 1991 Madrid Conference, America brought Palestinian representatives into the “peace process” for the first time.  Two years later, with tens of thousands of U.S. troops still deployed in the region after the first Persian Gulf War, the 1993 Oslo Accords held out the prospect of a self-governing—but not sovereign—“authority” in parts of the West Bank and Gaza, with some recognition of Palestinians’ “legitimate and political rights.”

-  President George W. Bush’s 2003 “Roadmap” finally proposed two states,” Israel and Palestine, “living side by side in peace and security”—but neither his administration nor his successor’s made appreciable progress toward this goal.  (While the Obama administration also endorsed the two-state model, if it were serious about “peace” and helping the parties achieve their rights, it would not be using every lever at its disposal to block Palestinian membership in international institutions and access to the International Criminal Court; it would instead be leading the charge.)

As Washington’s “peace process” strategy has become harder and harder to sustain, U.S. officials have hid behind pious claims that America can’t want peace more than the parties.  In reality, though, Washington is the only party that truly wants the “peace process.”  Certainly Israel has never wanted it; Golda Meir’s “leftwing” Labor government rejected Washington’s first peace plan in 1969.  Palestinians, for their part, have never come together to accept a “process” meant to deprive them permanently of genuine sovereignty and self-determination.

The two-state solution’s demise inevitably conditions long-term erosion in the perceived legitimacy of the current Israeli political order.  The proposition that Israel cannot continue occupying Palestinians while claiming to be both Zionist and democratic is no longer predictive analysis.  The U.S. government’s own demographic data show that the number of Arabs living under Israeli control—in “Green Line” Israel, Gaza, the Golan Heights, East Jerusalem, and the rest of the West Bank—already exceeds the number of Israeli Jews.

In other words, what we call the state of Israel is already a minority regime for the people it governs.  In the context of the current Gaza campaign, Israeli officials’ descriptions of Hamas as a foreign threat that must be defended against are disingenuous.  Hamas is a homegrown movement, born in 1988 in Gaza under Israeli occupation.  Even with the 2005 closure of Israeli settlements there, Gaza remains under Israeli control.  Thus, Hamas is not an “external” threat to Israel—it is an internal challenge to what the movement’s constituents see as an unjust and illegitimate political order still dictating their interactions with the world and exercising harsh and indiscriminate police powers over their daily lives.

This leaves the one-state option—some version of one person, one vote for people living under Israeli control.  For the foreseeable future, the one-state model will be opposed by the overwhelming majority of Israeli Jews and supporters of Israel.  It will also threaten current regional governments—e.g., in Egypt, Jordan, and Saudi Arabia—that have bought into Washington’s vision for a U.S.-led political and security order in the Middle East that includes nearly absolute freedom of unilateral military initiative for Israel.  But other important actors—Iran, Iraq, Turkey, and any other regional state where government becomes more representative—would support it.

A one-state scenario has profound implications for America’s position in the Middle East.  For the United States to “lose” Israel as a proxy for projecting hard power would severely circumscribe Washington’s capacity to keep its Middle East strategy oriented toward regional dominance.  It would instead push Washington toward a strategy of stabilizing the regional balance through serious diplomatic engagement with all relevant players (Iran as well as Israel and Saudi Arabia).

This is a radically different approach from the one envisioned by U.S. policymakers during the Cold War and pursued in relatively unconstrained fashion by U.S. administrations after the Cold War’s end, entailing a highly militarized U.S. presence and American micromanagement of regional political outcomes.  Given the deeply counterproductive results of America’s Middle East strategy over the last quarter century, one may hope that Washington will finally stop making policy in defiance of on-the-ground reality.  In the near-to-medium term, though, American politicians and policymakers are more likely to continue doubling down on the sorts of policies—including ever-increasing military assistance for Israel—that have put the United States on a trajectory of ever-declining influence in one of the world’s most strategically vital regions.