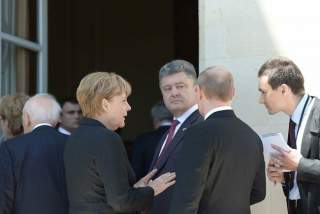 The crisis in Ukraine is the most severe security challenge in Europe after the Cold War. Energy has featured prominently in public debates surrounding the conflict. Yet, energy-market realities hinder some of the political preferences that currently feature prominently in the hallways of European capital cities. European policy makers should therefore push for separating energy from hard security issues in this conflict.

After a hesitant first few months, in May, European and U.S. policy makers decided to make energy resources part of the sanctions on the Russian regime. Russia is one of the world's prime energy producers. Its state budget is fuelled by energy (predominantly oil) revenues and Europe relies on Russia for 30 percent and 35 percent respectively of its gas and oil consumption. Yet, although politically tempting, making energy resources part of Western crisis management was a rash decision, as we have cautioned before. This is because several of the underlying rationales are questionable.

The first underlying rationale is that Europe can deal with a major gas-supply disruption. It cannot. Granted, due to a very mild winter, gas-storage facilities throughout the EU are filled, increasing resilience to short-term supply shortages. But having sufficient natural gas in the EU-wide system does not mean all member states can access it. First, results of an EU stress tests reveal that although Europe has made progress since the last supply disruption took place in 2009, several states in Central, Eastern and Southern Europe remain vulnerable. EU Commission data clearly confirms that resilience against supply disruptions is far from optimal. While Western Europe may survive longer, current storage in some East European countries would last as little as two or three months; yet winter may last significantly longer. Still, Washington and Brussels suggest that Europe could deal with a supply disruption if demand were roughly 75 percent of last year’s. This, however, means betting on a very mild winter—not a good basis for sound policy formulation.

The second rationale has been, as some have postulated, that Russia would leave the taps open while energy-sanctions efforts were stepped up. Charming as that may have sounded, it was never realistic. Last May, Gazprom decided to cut gas supplies to Ukraine, against the backdrop of an open bill amounting to over $5 billion, which poses a threat to EU energy security. Moreover, the Ukrainian Parliament recently started exploring the possibility of stopping the transit of gas to Europe. Indeed, Ukraine in the past has used its geographical monopoly on Russian gas transit to Europe, to get its way on energy pricing and non-energy related policy issues. The infamous gas crises of 2006 and 2009 left consumers in Bulgaria, Slovakia and elsewhere out in the cold while they cost Gazprom some $1.5 billion and severely damaged Russia's reputation among European customers. The crisis was primarily caused by disputes over prices and transit terms, with Ukrainian vested interests playing a central role in escalating events. Whilst the share of Russia's Europe-bound gas exports transiting Ukraine has fallen to around 50 percent, thanks to new pipelines including Nord Stream, Kyiv still has the grip on 40 billion cubic meters (bcm) that are needed to meet European winter demand and in turn generate an estimated $73 billion in annual revenues for Moscow's coffers. With Kyiv getting desperate, it is not inconceivable that Ukraine will consider playing the transit card to force Europe's and Russia's hands in the conflict.

The third underlying rationale is that energy sanctions are a means to coerce Russia into altering its behavior. They were never tough, to start with, although Washington did its best to frame its efforts as being forceful in comparison to the tepid European approach. One of the reasons for sanctions thus far lacking ambition is economic interests among core constituents on both sides of the Atlantic, including top Fortune 500 companies such as ExxonMobil and BP. With both U.S. and EU policy makers carefully catering to their domestic interests, sanctions in the energy sphere had little chance of becoming much more than nuisance. More fundamentally, however, it is highly questionable whether American and European policy makers want the Russian economy to be brought to its knees. They can obviously have no interest in a tumbling nuclear state on Europe’s doorstep. For Russia, energy is what the finance industry and the IT sector are for America: the backbone of the economy. Imagine Washington's reaction in case either Wall Street or Silicon Valley were crippled as a result of actions taken by an outside force. As Paul Saunders warned in a recent Op-Ed, the last time the United States targeted the energy sector of a major power—Japan—this ended with a world war. So if the sanctions “worked,” they might in fact trigger outcomes that are neither desirable nor even close to their initial goal— establishing peace in the Ukraine.

The fourth rationale is that Russia can be cut out of the European energy market. That is highly unlikely short of EU policies leaving the market paradigm. The EU started to liberalize its natural-gas markets from the 1990s onward, leaving the purchasing, trading and selling of commodities to (partly) privatized entities. Implicitly, this decision was meant to take political preferences out of the lexicon of energy companies. In a liberalized environment, price is the single most important incentive to operate. In that context, Russian natural gas is very competitive, as demonstrated by the low utilization of European LNG facilities. The lack of market integration in Central and Eastern Europe further exacerbates Gazprom's competitive edge in that part of the continent. Of course policies could be designed that would alter the existing division of labor between private and public entities, but absent such—very drastic—policy interventions, Russian natural gas will be a reality in European gas markets for decades to come.

All these reasons combined shine a different light on current attempts to curb Russian behavior and alter European energy relations. Energy plays too crucial a role for economy, society and national security to be made a bargaining chip in Europe's resurgent geopolitical woes. Energy sanctions, therefore, are not the way forward, nor is securitizing the energy sector further. Instead of going further down that path, efforts need to be made toward separating the ongoing conflict from undeniable energy sector risks. And, in fact, the energy sphere is where the EU and United States have the marge de manoeuvre and the policy tools they are lacking elsewhere to assist Ukraine.

First, efforts need to center on reforming Ukraine's economy and improving its domestic energy-sector governance. A country the economic size of Boston, Ukraine consumes as much gas as France, resulting in disproportionate import needs, notably from Russia. Second, a fundamental energy-pricing reform program needs to be put into effect. Given subsidized energy pricing, there currently is no incentive to invest in energy efficiency, meaning that Ukrainian industry, outside sales to Russia, remains uncompetitive in the global market. Third, restructuring Ukraine's gas debt needs to be embedded in a comprehensive and long-term plan for the country's economic recovery.

Europe and the United States have the knowledge and technology to facilitate a fundamental reform of Ukraine's energy governance structures, help eliminate corruption and improve the rule of law in the economy more generally. Western companies can help quickly to ramp up domestic production of Ukraine's vast domestic gas reserves, thus reducing import needs further. International and bilateral development organizations, such as the World Bank, the European Bank for Reconstruction and Development and USAID, can become important partners in such reform efforts, notably when it comes to improving energy infrastructure, sector management and efficient end-use consumption. Flanking these efforts, Europe’s priority should be to further stimulate internal market integration, making the bloc an attractive import market for suppliers from all world regions, and Russia one among other producers competing on price and market shares.

Critics may argue that Russia has come close to invading a sovereign country and is deeply meddling in Ukraine's internal affairs, which requires tough action. The reality is, however, that U.S. and EU governments are unwilling to pay a real price for Ukraine as the country is not strategically important enough to risk a major conflict with Moscow. Worse, current policies do not correspond with market realities and will therefore likely backfire. Taking determined steps toward carving energy out of the current conflict is not at all a bad policy option. It tackles issues that have impacted European energy affairs for two decades, and it comes with a double premium: improvements in Ukraine's domestic energy governance coupled with economic recovery, and clear advances in European energy security. Europeans stand most to lose, but also most to gain in this conflict. They should take the lead in giving policies a new direction.

Andreas Goldthau is a visiting scholar with the Geopolitics of Energy Project at the Harvard Kennedy School's Belfer Center for Science and International Affairs and a Marie Curie Senior Fellow of the European Commission, as well as a Professor of Public Policy at Central European University.