The Ultimate Failure of Tim Geithner 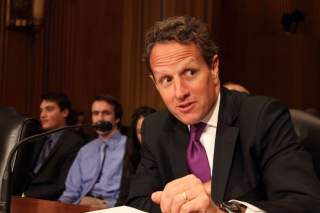 Former Treasury Secretary Timothy Geithner’s memoir, Stress Test: Reflections on the Financial Crisis, continues his efforts to obscure the motivations behind many of the bad decisions and omissions he made over a decade in public life. First as President of the Federal Reserve Bank of New York, then as the chief fiscal officer of the United States, Tim Geithner made a series of seeming blunders and carefully calculated oversights that were designed not to save the global financial system, but instead to protect some of the worst actors behind the financial crisis.

“The lack of financial prosecutions combined with the revival of financial profits have contributed to the belief that nothing has changed,” Geithner writes. “But nothing we did during the financial crisis was motivated by sympathy for the banks or the bankers. Our only priority was limiting damage to ordinary Americans and people around the world.”

But of course this is complete nonsense. As Ben White of Politico wrote: “He's the guy who bailed out Wall Street 'arsonists' with no strings attached, but wouldn't do much to help struggling homeowners or punish the greedy bankers who crashed the economy.” Yet Geithner apologists from author Michael Lewis to economist Gene Sperling somehow believe that Geithner’s decision not to give Old Testament justice to profligate bankers was somehow a selfless act.

First and foremost, when Geithner protected the banksters he was doing the bidding of his political sponsor and mentor Robert Rubin. The former Treasury Secretary, former Chairman of Citigroup and former CEO of Goldman Sachs avoided being held responsible for causing the dire straits of one of the largest U.S. commercial banks because of Geithner’s generosity. Geithner and his predecessor at the Treasury, former Goldman Sachs CEO Hank Paulson, blocked efforts by then-FDIC Chairman Sheila Bair to shut down Citigroup and place the bank into an FDIC receivership.

As Bair details in her excellent book, Bull by the Horns, officials at the Treasury and Fed concealed the dire situation facing not only Citigroup, but Wachovia, from officials at the FDIC until these banks were literally on the brink of failure. When Bair wanted to remove Rubin and other board members of Citi, Geithner and the other regulators refused to support the FDIC. By championing a government rescue of Citigroup, Geithner spared Rubin and the other officers and directors of the bank, at the very least, civil litigation by the FDIC under federal banking laws.

Geithner continues to argue in his public statements that holding the bad actors on Wall Street responsible for their actions would somehow threaten the financial stability of the Western world. But it is simply wrong for anyone to suggest that "systemic" harm arises by jailing crooked bankers. Indeed, while Geithner argues that reforms like the 2010 Dodd-Frank legislation have helped to repair the U.S. economy, the failure to bring to justice those who caused the collapse of the U.S. financial markets has in fact done lasting damage to markets and investor confidence.

The fact that we did not punish the bad bankers has left the culture of deceit and duplicity on Wall Street intact. Having outright convictions and hard jail time for crooks not only helps to repair investor confidence in the financial markets, but makes it possible for law-abiding managers and bankers to press for the reemergence of "honest" banking as the rule at major financial houses.

Whereas Geithner argues that new laws and regulation have addressed the causes of the financial crisis without prosecuting those responsible, in fact it is essential for full systemic recovery that we take action to inoculate our society against future bad acts. No financial system can be "balanced on the back of fraud," to paraphrase my friend and coauthor Fred Feldkamp, but that is precisely what Tim Geithner, Larry Summers and the other members of the Rubin political tendency would have us believe when they argue against prosecuting bad bankers.

In fact, the title of Geithner’s book, “Stress Test,” is very revealing. When the Fed and Treasury first came up with the idea of conducting stress tests of the major banks, the explicit intention was to reassure investors as to the solvency of these institutions. Eventually, the stress tests were incorporated into the Dodd-Frank law. Stress tests have now become an annual ritual whereby the Fed examines these banks to see if they have adequate capital. Regulators, politicians and researchers now almost universally agree that the problem that caused the financial crisis was a lack of capital.

The accumulation of subprime debt that Geithner describes came about not because banks and nonbanks had inadequate capital, but because they concealed the true magnitude of their nonequity liabilities. That may sound like the same thing, but the difference in perspective is very important. The big banks pretended to "sell" assets to off-balance sheet vehicles, which in turn sold bonds to investors. These liabilities were “conveyed” to investors under the assumption that the transactions were a "true sale." These transactions were later shown to be, in fact, secured borrowings which required capital support, as was clearly the case with Citigroup. It is important to note that back in the 1980s, regulators such as former Fed Chairman Paul Volcker and his contemporary former FDIC Chairman William Isaac opened the door to the big banks engaging in fraud via off-balance sheet vehicles.

In the U.S. Supreme Court decision in Benedict v. Ratner (1925), Justice Louis Brandeis said that failure to adhere to the requirements of a complete sale “imputes fraud conclusively,” yet neither Geithner nor his successor Jack Lew have seen fit to prosecute the officers and directors of the largest banks for what seem to be wanton acts of securities fraud. Public officials like Tim Geithner, members of Congress, regulators and even public paragons such as Paul Volcker refuse to talk about fraud. We are told over and over again that we cannot prosecute the managers of the big banks for fear of systemic risk. And the only solution we are offered is higher capital, without any hope of ending big banks’ bad practices, which continue even today.

The fact that the U.S. economy is still limping along at rates of job growth and consumer activity well below those needed for a full recovery is a direct result of the unwillingness of leaders such as Timothy Geithner to prosecute fraud and, thereby, restore investor confidence. Financial regulators are imposing ever more stringent capital requirements and limits on risk taking by banks, with deleterious effects on the economy, jobs and our collective future prospects. But a lack of capital was not the problem.

Had we put aside the self-serving advice of Tim Geithner and instead prosecuted those responsible for causing the subprime meltdown, as was done in the 1930s and even in the S&L crisis of the 1980s, the process of economic adjustment would be complete and the global economy would be making far greater strides in terms of jobs and consumer activity. Instead, the economies of the Western nations are wallowing in a deflationary trap because the only good idea coming out of politicians in the G10 nations today is "more capital."

In the United States, employment is flat and housing prices are starting to decline. Financial markets are at all-time highs, but there is little in the way of capital investment to support future jobs and business expansion. Higher capital levels and lower levels of credit creation ultimately translate into reduced levels of economic growth. We need more transparency and greater accountability, but none of our leaders are willing to do the hard work. That, at the end of the day, is the ultimate failure of Tim Geithner.

Christopher Whalen is the author of the December 2010 book, Inflated: How Money and Debt Built the American Dream, now in a second printing from John Wiley & Sons. He is completing a new book coauthored with Frederick Feldkamp entitled Financial Stability: Fraud, Confidence & the Wealth of Nations scheduled to be published by John Wiley & Sons in the second half of 2014.