The UN Is Needed Now More Than Ever. Here's Why. 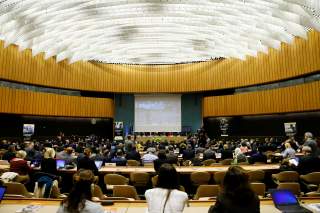 “The United Nations has potential . . . But what has it actually accomplished?” These words from a New Yorker at a dinner earlier this year came back to me after this year’s UN General Assembly. Both inside and outside the UN, it is clear things must change. But the unasked question is just what is the UN up against in living up to its potential? As one of the largest ever UN reform processes gets underway under Secretary-General Antonio Guterres, tough questions are being asked and dispassionate answers are expected.

The UN has many faces—a parliament of nations, an umbrella of intergovernmental collaboration and not-for-profit activity to solve mankind’s biggest challenges—from hunger to disease to climate change. But the one for which it’s arguably held most accountable is maintenance of peace and security. Here, the part of the UN that is under the scanner of member states and the media alike is its multi-national civil service that takes instructions from the UN Security Council on when, where, and how much effort should be put in to ensure peace and security. In following through on its instructions/mandates from the Security Council in the uncertain world around it, this civil service finds itself frequently facing a few questions. Five of them illustrate its dilemmas and how it copes with them.

The first question: how have the UN’s actions prevented the “scourge of war”—its objective as laid out in the UN Charter? How we define war has rather incrementally expanded over the last few decades. Fresh from the memory of the devastation of World War II, those framing the UN charter were ostensibly thinking of war as unbridled armed conflict between states. Rather, the founders of the UN felt that if one country invades another, or if two countries (member states) were to go to war with each other, there should be a deterring force to restore peace, and that the collective might of all the other countries of the world—morally and coercively—could act as such a force. But over the past twenty years, the nature of war has changed. Intra-state wars—civil wars—have become more widespread and more destructive than any wars between states. In fact, wars between two countries are so rare now that, in 2015, there were just thirty fatalities from such conflicts in comparison to thousands of lives lost in civil wars. Intra-state wars last four times longer than inter-state wars and at least forty percent of them end up drawing in different states. Since 1989, every given year has seen at least twenty civil wars—some new and many old. As a result of this trend, the UN is focused now than ever before on addressing the scourge of civil war. Unsurprisingly, only four out of fifteen UN peacekeeping missions are working on inter-state disputes. This does not mean the UN does not mediate between states when asked, but rather that its energies are directed at the more destructive form of war in our age.

The second question is about how effective has the UN been in restoring peace throughout the world. This has been done in two ways. The first is by assisting countries in transitioning from conflict to peace, such as in Cambodia and East Timor. Through such missions the UN has been largely successful in restoring peace in states with small populations but whose conflicts reflected the larger tensions in the world, especially during the Cold War. The value of this work cannot be underestimated: it was, after all, an assassination in a small state—Serbia—in 1914 that led to World War I and unprecedented carnage. Through its work, the UN has invented a new type of diplomacy—one which uses the weight of world opinion (rather than of national interests) to make peace within a country where the state has collapsed or is seriously threatened. The role played by the UN in ending the civil wars in El Salvador, Guatemala, Angola, Nepal or in drawing the curtains on the Iran-Iraq War is still remembered in these countries.

The second way the UN has focused on restoring peace is by maintaining the peace. It is no exaggeration that it was not just nuclear deterrence (as seen during the Cuban Missile Crisis) or military alliances—such as Warsaw Pact and NATO—that have helped Europe experience decades of peace since World War II. It was the work of little known UN commissions such as UNECE, where Cold War rivals met to talk business and grew to see each other as “rational actors,” despite their governments’ external propaganda, and struck deals that went far beyond commerce. These platforms for dialogue helped maintain an undercurrent of trust between the East and the West.

The third question concerns whether the UN is indispensable or not. In an era where regional organizations like the OSCE, EU, AU, SCO, OAS, etc. are increasingly performing peacekeeping and peace-building roles, some ask if the UN’s role is as unique as it once was. To this, one must say that the UN’s goal is a world where there would be no need for the UN. Thus, the UN has worked towards fostering “regional solutions for local problems.” For instance, after the formation of the G-5 group to combat terrorism in the Sahel, the UN stepped back to provide support for the group. Empowering regional organizations to combat common threats is in line with its strategy of “prevention.”

The fourth question: why the UN has not succeeded in staunching persistent conflict in some countries in recent years? It is true that intra-state conflicts today—such as in Afghanistan or Somalia—seem to last longer than previous conflicts ever did. But there are reasons. The growth of technology and global finance has meant that civil wars have become easy to start and easier to escalate. Conflict has become cheaper to finance. Proxy wars are no longer the exclusive domain of major powers, as private donors, diaspora groups and criminal enterprises are all able to fund factions in today’s civil wars. Traditional diplomacy and mediation cannot end such conflict. The UN has thus struggled with the challenge of ending conflicts which cannot be framed by national interests alone. Resource-trafficking in the shadow of a conflict means that some civil wars look like private enterprises. To address this, the UN works with its arsenal of sanctions experts and collaborates with law enforcement agencies to isolate the conflict through targeted actions such as arms embargoes. While it is neither a precise nor a short process, it remains the only effective one to date.

Lastly, what is the UN’s continuing relevance in a world where power is increasingly fragmented? Not only are states more hesitant to fight each other and imperil their prosperity; states are also beginning to realize that they cannot really control the end-game in a proxy war on a third country’s territory. Even airpower and missiles that can project power across time-zones have their limits. The only alternative in these conditions—even if it comes later rather than sooner—is to have someone set a table where parties can negotiate. This is where the UN is needed today more than ever before: what the UN brings to the table is the table itself. It offers an umbrella for nations’ divergent interests to come together—be it to share their red-lines, to jointly fight the specter of terrorism or to stem the flow of weapons to countries undergoing conflict.

But setting the table is not enough in itself. The key is to start talking—and to time it right. Criticism about UN-facilitated talks has not been about them being too little, too late. For its part, the UN has tried to navigate the dilemma of stepping in early without stepping on the sovereignty of member states. The UN calls this “preventive diplomacy,” and now spends the bulk of its political outreach resources on it. The successes of preventive diplomacy never make the headlines. They are quiet and often held away from the media glare. But the fact that we are experiencing what is now called a period of “Long Peace”—in which businessmen are as feted as soldiers is proof of how far we have come. Preventive diplomacy ensures that the Long Peace is not taken for granted. By continually monitoring every sign of conflict and drivers of conflict—from bad elections to conditions of famine—the UN is today able to often anticipate conflict and undertake pre-emptive messaging to ensure that tensions do not spill over into violence. By this process, diplomacy, which was once an art, is now slowly transforming into a science.

These answers are key to understand why the UN is where it is today.

Secretary-General Antonio Guterres is attempting a long-overdue reform of the UN system. But for it to be effective, governments would do well to explain the importance of the UN and its work to their domestic constituencies. For it is the governments themselves that set the UN’s agenda. While some procedural reform is inevitable and even welcome, assessing the UN should be less about headcounts and budgets, and more about outcomes. The UN remains the most cost-effective option to pursue the restoration and maintenance of peace. And the questions the UN faces are questions to us all, to which all of us have an obligation to respond.