The United States Economy Is Doing Well—Here's Why 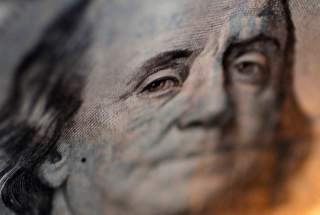 Attempting to parse the U.S. economy is not a simple task due to often competing or contradictory data points. Often, it is useful to take a step back and reassess where the U.S. economy currently sits, and what that means about the potential future of the economy. However, it does not take long to understand the current state of the U.S. economy this time around.

While it is highly volatile, the Federal Reserve Bank of Atlanta’s GDPNow tracker puts U.S. gross domestic product growth at a 4.5 percent quarterly annualized increase. This is a significant acceleration from the previous sub-three percent first quarter. Can this estimate be trusted? Probably not. After all, the GDPNow indicator projected the relatively disappointing first quarter to grow at more than five percent in February.

But, is there reason to believe that the U.S. economy is regaining momentum in the second quarter? Certainly. For starters, the ISM Manufacturing New Orders Index ticked higher in May. New orders tend to be a leading indicator of economic health. The ISM survey skews toward larger businesses, but smaller companies have a similar attitude. In fact, the NFIB Small Business Optimism Index is only slightly off post-crisis highs. One of the great misnomers of economics is small businesses are the drivers of the U.S. economy—it is actually start-ups, and they happen to be small—but they are an important facet of the economic landscape.

In essence, the current state of the U.S. economy is great, and that should continue. But there are ways economies can be made better and there are ways to derail growth. In the current environment, a couple of things should be on every observer's radar. Those are trade and the leavers.

On the trade front, Prime Minister Justin Trudeau of Canada stepped up criticism of the Trump Administrations trade practices ahead of the G-7 summit. He also joined France's President Emmanuel Macron, in nicknaming the meeting the G-6 +1 to indicate that President Trump was on the outside of the group’s favor. Since then, the rhetoric has not cooled on either side, and it is unlikely to subside at the meetings.

What does all of this mean? In March, the case was that steel and aluminum tariffs were unlikely to start a trade war with China. The China talks appear to be going reasonably well, and it remains our base case of analysis. But the U.S.’ close allies were spared the tariffs through exemptions. With those exemptions rescinded, retaliation from the three trading partners is beginning to become a reality.

With both China and traditional allies the targets of American tariffs is difficult to foresee the long-term economic impact. First, there is a concerted and coordinated effort by America’s allies to retaliate. In fact, the Japanese trade minister made a direct statement proclaiming that this such a retaliation is in the works. The question is to what extent will America’s allies coordinate and for how long? Trade battles are frequent occurrences and do not typically derail economic growth, but trade wars are unpleasant experiences for all and risk ugly economic outcomes such as stagflation.

What will the outcome of these battles be? The chances are tensions will dissipate somewhat as the Trump-Kim Summit will take the headlines away from trade at least for a while. In addition, China may come to the forefront during President Trump's trip to Asia. But trade is going to be an issue in the headlines for the foreseeable future. It is not going away. With NAFTA yet to be resolved, the European Union banding together on retaliatory measures, and China in the crosshairs, there are numerous ways that trade rhetoric could accidentally lead to more than a simple trade spat.

The leavers—those leaving jobs—are a more positive development. According to the Job Openings and Labor Turnover Survey (JOLTS), there are a record number of jobs openings. And there are now more job openings than people available to hire. There are a couple of reasons to dig a bit deeper here. One is to look at how this will affect wage growth. Another is whether or not the current U.S. labor market trends are sustainable.

At the current rate, the U.S. will have more than forty million workers quit their job this year. On the surface, this is a stunning figure. At this point in the labor market cycle, it is also necessary to fill jobs. But it is a spectacular level of dynamism that is unique to the U.S.

Why does it matter that there are so many job openings, so few available workers, and rising numbers of people leaving their jobs? It means to fill those jobs many businesses will need to look to already employed individuals. Companies must offer better pay packages and additional benefits to attract already employed individuals. This means that wage growth may accelerate in the U.S. as businesses bid from both sides—retainment and recruitment.

Thus far, recruitment has been the only side that has significantly bid up labor currently at four percent year-over-year. For retainment, the figure is lower at 2.9 percent. However, when the need for retainment reaches critical levels, wage gains should increase. With leavers near all-time levels, that may be approaching, and wage gains may be coming.

This is by no means imminent. But quits and openings, recruitment and retainment are often overlooked catalysts for wage gains. Finally, there is also no reason to suspect the dynamism of the U.S. labor force is slowing.

Although trade tensions are flaring, a robust American labor market may be on the precipice of higher wages. The U.S. economy is growing at a clip not seen in years, and there is little reason to believe it will slow much in the next couple of quarters. After taking a step back, the U.S. economy is good shape.

Image: A portrait of Benjamin Franklin on a U.S. One-hundred dollar bill is pictured at Interbank Inc. money exchange in Tokyo, in this September 9, 2010 picture illustration. The dollar neared a 15-year low versus the yen on Thursday as traders bet Japanese authorities were not yet ready to intervene in the currency market. REUTERS/Yuriko Nakao