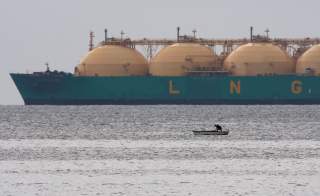 Many in the United States and among our foreign allies are deeply disappointed by President Trump’s retreat from global leadership. What is equally depressing is how the administration stands to squander an enormous and steadily growing source of geopolitical clout if it does not figure out how to manage U.S. energy abundance wisely.

Recent data from the Paris-based International Energy Agency (IEA) projects that the United States’ vast natural gas production capacity, and its growing role as an overseas gas exporter, can compete with all of the major global players in as little as five years. U.S. natural gas sales will shake up fundamental trading patterns and market pricing for this energy commodity. They will also undermine the clout of countries like Russia and Qatar, known for their natural gas abundance and their notorious capacity to stir up regional conflict.

In an interview with the Christian Broadcasting Network, President Donald Trump cast U.S. energy abundance as a critical source of U.S. strength in dealings with Russia. There is truth to that, but the administration must play an active, strategic role to leverage the geopolitical power of the asset and put this gush of U.S. gas to work for our strategic interests.

The truth is that Russia is in an advantageous position as a pipeline power in Europe. According to the IEA, Russia natural gas made up a whopping 34 percent of European imports, an increase from the previous year. More U.S. natural gas on the market will make European buyers breathe a little easier knowing they have alternatives and are less beholden to Russian coercion or inflexible supply arrangements. But the U.S. volumes will not erase Russian market share, especially if Russia deliberately acts to keep prices low.

What’s more, sanctions on Russia will not chip away its energy dominance. These measures dealt a blow to Russia’s ability to finance energy projects when they were put in place in 2014. But the measures had no real effect on Russian exports to Europe. Proposed new sanctions in Congress could add some constraints on Russian energy projects. However, few expect that President Trump will be a tough enforcer and squeeze Russian energy.

The ways that the administration can put U.S. natural gas to work in advancing U.S. interests, when it comes to Russia or any other international competitor, comes down to smart domestic regulation and targeted energy diplomacy. Policy leaders must stay focused on policies to support a strong, stable U.S. gas production and export capacity, the basis of our geopolitical leverage from gas. A few policies will go a long way.

First, the administration should build public support for more natural gas, and gas infrastructure, development in the United States to ensure a strong, sustainable U.S. role in the global market. A key plank of this is federal enforcement of a rule to minimize methane leakage at energy extraction sites, and guarantee transportation integrity through the U.S. pipeline network. This will indicate to extremely skeptical environmental activists that the administration can be a responsible steward and that energy companies will have to restrict volatile emissions. Energy companies will struggle to win a “social license to operate” now and in the future absent this kind of meaningful regulatory action to control methane emissions. As an additional benefit, enforcing the rule will give some valuable policy certainty to industry and contribute to strong, stable job growth in the sector.

Second, the administration should streamline the permitting process for the export of liquefied natural gas (LNG). Building on work to increase regulatory efficiency in this area by the last administration, such a move will signal to industry new certainty—and a less cumbersome process—for future projects to add more export terminal capacity. Specifically, the Trump administration could nearly eliminate the project-by-project federal approval process for terminals. By keeping emergency powers to control exports in a supply crunch, the executive branch can reassure skeptics.

Third, President Trump should direct the Department of State and Department of Energy to work with emerging LNG customers overseas to reform regulation and price controls to more efficiently conduct fuel-switching (between coal and natural gas) at power plants. This can help boost demand for U.S. gas abroad, and it can make power markets more efficient and reliable. India, a growing LNG importer, is an excellent candidate for this outreach. It will be a key, long-term importer in South Asia, and strong, bilateral energy cooperation will enhance the relationship President Trump and Prime Minister Modi have been building.

President Trump would be wise to leverage domestic natural gas abundance to strengthen political alliances abroad and influence competitors. In this way, he can help to restore U.S. global leadership. Now, Russia may be the most prominent target for the exercise of U.S. geoeconomic influence. But it will not be the only target in the years ahead and domestic gas will provide critical leverage.

Neil Bhatiya is a research associate with the Center for a New American Security, where Elizabeth Rosenberg Directs the Energy, Economics and Security Program.

Image: A fisherman stands in his boat as a liquid natural gas tanker (LNG) passes the coast near Havana on June 28, 2009. REUTERS/Desmond Boylan/File Photo​