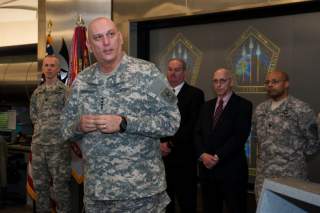 The new arms race scrambles for bytes, not bombs. To take and hold the cyber high ground, the armed services (and just about everybody else) want more fingers on keyboards and eyes on screens.

Army leaders have kicked around the idea of filling the cyber-ranks by grabbing talent off the street rather than combing through boot camps to find folks who can boot-up computers. But co-opting geeks and hackers doesn’t add up to a sustainable human-capital strategy. America’s Army will have to do more to be a superpower in cyberspace.

Enlisting private-sector operatives to fight public wars is nothing new. General George B. McClellan outsourced strategic intelligence to the Pinkerton National Detective Agency. Commercial teamsters carted Union ammo to Gettysburg. Harnessing the free market in the fight for freedom is an integral part of the Western way of war.

Last December, Lt. Gen. Robert Brown, commander of the U.S. Army Combined Arms Center at Fort Leavenworth, publicly suggested it might be time to apply this approach to cyberwar. “We need to give serious consideration to how the U.S. Army could combine the technical expertise of the ‘Google’ generation with its more traditional military skills,” Brown said.

He also noted a possible conflict of culture: “They grew up on Google and wear ponytails. We need to look at ways to bring them into the Army without necessarily going through the same training procedures as our combat troops."

Brown’s idea has merit, but pitfalls as well. And even if it works, the approach won’t be sufficient in itself to arm the Army’s cyber arsenal for the struggles ahead.

Past experiences with turning civilians into instant military assets show why the practice isn’t the Easy Button the Army might desire.

For an example, one need look no further than the academy-award nominated film The Imitation Game. It’s the story of what happened in World War II, when the British hired Cambridge uber-brain Alan Turing to break Germany’s toughest, top-secret code. While not one hundred–percent history, the film does a fine job explaining both the extraordinary success of Turing’s team, as well as the inevitable culture clash that arises from trying to align the efforts of academics, warriors and shadowy intelligence types.

Histories record the same dynamics at play elsewhere. Jennet Conant’s 2006 book, 109 East Palace: Robert Oppenheimer and the Secret City of Los Alamos, documents the friction that ground against the wheels of progress in the Manhattan Project. John Ohly’s Industrialists in Olive Drab: The Emergency Operation of Private Industries during World War II (2000) tells the story of a handful of industrialists “charged with the mission of guaranteeing that private companies provided the military goods that had been promised.”

The war effort’s enlistment of Hollywood filmmakers is the best known instance of the U.S. military drawing on unique talents that just aren’t taught in Army schools. Mark Harris’ Five Came Back: A Story of Hollywood and the Second World War (2014) tells the story well, revealing its many ups and downs.

Consider Frank Capra’s documentary Prelude to War. In retrospect, it’s an iconic film about the war. But, during the war, it had little impact. By the time it came out, theater audiences were more interested in winning the war than why it started. The troops would have preferred Betty Grable.

Other films, like Walter Huston’s Let There Be Light, never saw the light of a theater projector. The Army shelved them, fearing their unflinching realism might depress veterans and their families.

All these experiences offer lessons that apply to recruiting for cyber-fighting:

Believe in your mission:

Some truly gifted people want to serve—in uniform. Some may be motivated by old-fashioned patriotism. Others will sign up because they embrace difficult challenges. Getting “the best of the best” is a recruiting goal, but recruiters should see it as providing people with outstanding cyber-skills with a new and exciting opportunity to serve.

Shoot for the moon:

It makes little sense to craft out-of-the-box human-capital programs to sign up mediocre people. The pain is only worth the gain for going after truly extraordinary talent.

Batten down the hatches:

There will be headaches, from clashing cultures to conflicting expectations to ethical disagreements. There must be a plan for mitigating the inevitable friction. And the management structure must be flexible and responsive enough to deal with the unanticipated “OMG” crises.

Failure is an option:

Even the best “brainiac” might miss the mark. Those looking for the big payoff must have a high tolerance for disappointment.

Operational security and counterintelligence have to be baked in at the front end. This is a real challenge. Free spirits don’t like red tape. On the other hand, it’s not cool when all the secrets wind up in Moscow.

Any program to recruit unique talent has to be paired with a human-capital program that consciously recruits and retains a workforce with all the critical skills, knowledge, and attributes the organization needs. Making victory contingent on your ability to cast a net and catch a few people with bright ideas is a mug’s game.

Hopefully, when General Brown threw out his notion of tapping the Google generation, he had in mind something more thought out than just giving a few hackers helmets and the passwords to the NSA.

What the armed forces could use is a visionary, adaptive, disciplined-but-creative way to tap private cyber-talent, paired with a plan for a robust home-grown team of military cyber warriors.

James Jay Carafano is The Heritage Foundation’s vice president for national security and foreign policy studies and the author of “Wiki at War: Conflict in a Socially Networked World.”