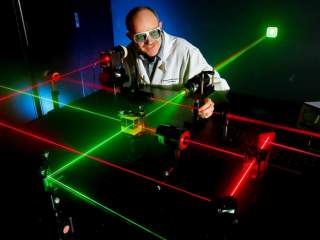 No matter who wins the White House this year, America will begin rethinking its armed forces in earnest. The debate will most certainly cover what the Pentagon buys, when it buys it, and what it does with it. But thinking about the future also ought to embrace a robust effort that includes force experimentation and prototyping of next-generation systems.

Days of Future Past

Remember when the future was all the rage? With the end of the Cold War, revolutionizing military affairs and transforming the armed forces became hot topics.

All that intellectual ferment halted in 2006, as a bloody insurgency raged across Iraq and the mission in Afghanistan bogged down. Consumed by the wars we already had, there was little brain space left for pondering tomorrow’s war.

Jettisoned as well were the major commitments the military had made to dedicate forces for experimenting with new operational concepts and future capabilities. In 1994, under the Army’s Force XXI initiative, the Fourth Infantry Division at Fort Hood, Texas was designated as the test bed for field experimentation. That mission ended abruptly after 9/11, and the division shifted its focus to real combat operations in Iraq and Afghanistan.

Marine Corps experiments drew from units of Marines stationed or training at Quantico, Virginia, where the Marine Corps Warfighting Laboratory is headquartered. As the war expanded, the forces available for big experiments dwindled.

As the wars dragged on and the operational tempo of worldwide deployment quickened, the Navy and Air Force also became too stressed to be able to dedicate resources to playing with the future. The age of Big Think was over.

In 2008, then Defense Secretary Robert Gates delivered a tearless eulogy in Colorado Springs. “I have noticed too much of a tendency towards what might be called Next-War-itis — the propensity of much of the defense establishment to be in favor of what might be needed in a future conflict,” he lectured. In other words: Forget it.

The future’s plummeting priority resulted from more than the distraction of war. For the last seven years, President Obama has put the squeeze on defense. The armed forces’ capacity and capabilities to meet all their mission has steadily declined. The Pentagon is struggling to put forces in the field, let alone find enough stuff left over to play Star Wars.

Experimentation and prototyping in the armed forces today is more than just talk—but just barely. (See, for example, a summary of recent Army initiatives.) Most of the effort is in the virtual environment or at the small-ball level. There is little bending of metal and muddying of boots in the field.

Resources are a problem. “Today, it is hard to get money for experimentation without being attached to a program of record,” laments House Armed Services Committee Chair Mac Thornberry. “And programs of record tend to be sacrosanct, even when they do not make sense.”

There is frustration in the force. “We’ve got to push things out there faster,” says Lt. Gen. Robert Walsh, commanding general of the Marine Corps Combat Development Command. “We’ve got to be willing to take them out there, get them out to the fleet, experiment with them… play with them, prototype them, break them, work with it, and if it fails it fails.”

A compelling case can be made to get back into the futures business.

Arguably, thinking through the future has worked in the past. Some of the greatest peacetime advances in transforming how U.S. military forces prepare for the next fight came from field experimentation. The Army has a long legacy of using prototyping, field trials and experimental units. The Marine Corps used similar practices to develop amphibious warfare. The Navy did likewise to pioneer carrier operations and naval aviation.

There is also a convincing argument that it is right to prepare for the future even as we still fight the last war.

The brutal truth is that war is the best teacher. The experimentation running up to World War II was a great benefit to the services, but the real learning, adaption and innovation came on the job. Today, America remains a nation at war, and the best laboratory results come in learning lessons from what’s happening at the sharp end.

But even as the military engages in current operations, other kinds of competition are looming: different missions, in different environments, that could demand different practices and platforms. Little of what is going on in Iraq or Afghanistan today is going to help in dealing with Russia, Iran, North Korea or China tomorrow. Nor will operating experience carry over well into environments like the Arctic or the Indo-Pacific.

“It is the task of military science,” reminded the distinguished historian Sir Michael Howard, to do as much as possible before the battle to be not “too badly wrong” when the fighting starts.

Gates was flat wrong about “Next-War-itis.” After a decade of bad stewardship of defense, the military is not only struggling in the current fight, it has mortgaged getting ready for future tasks.

The time may be right to start talking again about making a serious investment in the future. Support in Washington is growing. Congressman Thornberry, in particular, has been adamant proponent. “I want to look for ways to foster experimentation and prototyping,” he says, “both in developing technologies and in their application while ensuring that only mature technology goes into production.”

For starters, the armed services need sensible, regular, annual budgets that maintain trained and ready forces, support current operations, dependably fund current acquisition programs and provide additional money to prepare for the future. There should be enough cash on hand for the services to dedicate units fully to experimental and prototyping activities.

Next, the administration needs to take the politics out of future planning. Instead of directing the services to focus on politically favored priorities like climate change and gender integration, the Commander-in-Chief should let armed forces turn their intellectual energy and experimental efforts to national security missions.

Then, the Pentagon needs to throw the “offset strategy” out the window. Expecting technology to magically appear and offset years of neglect in military investment is sheer fantasy—and extremely dangerous.

Further, we need to loosen up. Washington needs to start encouraging the services to embrace more risk-taking, rather than risk aversion, when it comes to thinking about what will come next. “To do that, a culture shift is needed not only in DOD [Department of Defense] but in Congress as well,” Thornberry argues. “We have to accept—or even expect—regular, small failures, in order to have greater success, for if every experiment is a success, we are not learning very much.”

And we need to get going. Time is not on our side. America needs to show its competitors it has its head back in the game.

The next wave of experimentation and prototyping has to be robust, encompassing more than just air and surface operations. The military needs to seriously experiment and prototype in the domains that enable our forces to function. Any experimentation plan that doesn’t include cyber, space and undersea operations isn’t worth a damn.

And experimentation ought to include prototyping the systems that are game changers and putting them out there with real forces in real conditions. Robots, direct-energy weapons, autonomous systems, platforms with new nanomaterials—that kind of stuff ought to be all over the place. Experimentation should also range heavily into the cognitive domain, to exploit major advances in neuroscience.

Finally, Washington must discard the idea of “whole-of-government” operations. Military experimentation and prototyping ought to account for the fact that the services won’t be the only players on the field. The military ought to have enough cash on to pay for other parts of government to participate in meaningful, useful and relevant experimental activities.

While it is unlikely that this administration will muster the energy to get going, perhaps the next one will. In the meantime, the broader defense community doesn’t have to wait to be told to think big. We can start now. Congress can also spend the next year plotting a return to the future.

It is time to cast aside the age of austerity and usher in the age of big, deep think.