Is the U.S. Navy Dying a Slow Death? 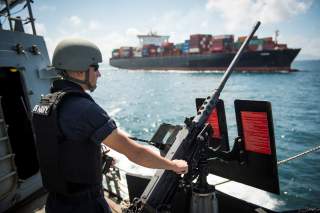 The world’s oceans and sea have never played a more vital role in the security and prosperity of our nation and the majority of the world’s population. Over 90 percent of global trade flows via maritime shipping lanes, and 99 percent of all international data (phone, texts and internet) are transmitted via undersea fiber optic cables.

The U.S. Navy provides a continuous global presence that enables our nation to respond quickly to crises around the world. These operations can range from humanitarian and disaster relief assistance—such as the current post-Hurricane Maria operations in the Caribbean—to support of counterterrorism combat operations in Libya and Syria.

The Navy’s peacetime forward presence also assures our allies and friends, deters potential adversaries and ensures the free flow of commerce and communications along the world’s sea lanes

A scan of the daily news headlines reveals ample evidence that maritime security threats are rapidly increasing, especially in the world’s critical geographic regions of concern: Europe, the Middle East and Asia.

An aggressive and increasingly belligerent Russia presents a very real threat to stability in Europe. Despite a declining economy, Russia continues to prioritize the modernization of its nuclear arsenal and its submarine force. Its recent military activities in Ukraine and Syria have demonstrated advanced capabilities including highly effective information warfare and cyberwarfare operations.

In Asia, a defiant North Korea continues to develop long-range ballistic missiles and ever-smaller nuclear warheads that may have the ability to reach U.S. targets. China, too, has assumed an aggressive posture, building up and militarizing islands in disputed territorial waters in the South China Sea. In addition, its naval forces conduct reckless operations in attempts to intimidate neighboring countries such as the Philippines and Japan from exercising their right to freely navigate in international waters.

Iran’s ballistic missile program and dogged pursuit of advanced military capabilities, coupled with its enduring support of terrorist organizations, present the most significant security challenge in the Middle East to the United States, its regional allies and the free flow of maritime commerce through the Strait of Hormuz.

The rapid maturation and proliferation of advanced military capabilities has increased the maritime security threat from nonstate actors as well. Although unsuccessful, the October 2016 cruise missile attack against the USS Mason by Iranian-backed and armed Houthi rebels in Yemen clearly illustrates the reality of such threats.

Can today’s Navy meet the ever-increasing operational demands and deter aggressive regional threats? Assessing the fleet across three key areas—capacity, capability, and readiness—The Heritage Foundation’s 2018 Index of U.S. Military Strength evaluates our naval forces as only “marginally” up to the task.

The Navy’s capacity is measured in the number of ships and aircraft in the fleet. Heritage’s benchmark for the minimum U.S. military capacity is based on the forces required to successfully engage and prevail in two simultaneous major regional conflicts, such as combat operations in Korea and the Middle East. Based on this standard, Heritage assesses that the U.S. Navy requires a minimum of 346 ships, including thirteen aircraft carriers and fifty amphibious warfare ships. Unfortunately, today the U.S. fleet only has 279 ships, with eleven aircraft carriers and thirty-two amphibious warships.

The fleet today now has fewer ships than at any time since the beginning of World War I. To cope with this shrinkage, the Navy has pushed its ships and sailors to the limit to maintain over ninety-five ships continuously forward deployed around the globe. Recent collisions by Seventh Fleet warships have killed seventeen U.S sailors—a stark warning that the U.S. Navy is too small and stretched too thin to meet its day-to-day operational demands, let alone surge in response to a major regional conflict or crisis.

The emergent deployment of several Navy ships in support of Hurricane Irma and Maria disaster relief operations has stressed an already strained fleet force-planning schedule. For example, USS Wasp was scheduled to deploy to Japan when it was diverted to the Caribbean in late August; the amphibious ship she is still supporting relief operations in Puerto Rico. Wasp’s delay will in turn postpone the return to the United States and scheduled long-term maintenance of the USS Bonhomme Richard, further adding to the Navy’s maintenance backlog.

With a battle forces fleet that is sixty-seven ships short of the two MRC benchmark and is unable to adequately surge in response to maritime crises, the Heritage Foundation assesses the Navy’s capacity as marginal.

The Navy’s most successful surface ship program, the Arleigh Burke-class guided missile destroyer, was designed over thirty years ago. Although significant improvements have been made via upgrades, the most recent version of its air and missile defense radar system is reaching the size, weight, space and power limitations of the hull design. The Littoral Combat Ship program has overcome some of its early problems—e.g., cost growth, design and construction issues—but evolving maritime threats raise significant concerns about its survivability in contested environments. While the Navy will soon be soliciting proposals for a new frigate program with increased survivability and lethality capabilities, it won’t award the initial contract until 2020.

The Virginia-class attack submarine has been an extremely successful modernization program, adding increased capabilities with each new block buy. Nevertheless, two-thirds of the attack submarine fleet is still comprised of the legacy Los Angeles-class submarines.

The F-35C is the Navy’s largest aviation modernization program, delivering fifth-generation fighter stealth and electronics capabilities to the fleet. This program has suffered numerous developmental difficulties as well as cost overruns, contributing to reduced procurement levels that will only partially replace the current F/A-18 inventory. While these examples provide just a snapshot of the Navy’s modernization portfolio, they do give credence to the Heritage Foundation’s overall capability score for the Navy of “weak.”

The area where the Navy has suffered the most dramatic and visible decline is in readiness. First, the string of accidents in the Seventh Fleet, culminating in fatal collisions with commercial ships by the USS Fitzgerald and USS John S. McCain, exposed the fact that the extremely high operational demands on forward-deployed ships have left no dedicated time to formally train ship’s crews and certify their proficiency. The number of expired warfare certifications among the Japan-based destroyers and cruisers has increased fivefold since May 2015. The seamanship certifications have expired for eight of the Seventh Fleet’s eleven ships.

A combination of deferred maintenance and insufficient public and private shipyard capacity has led to significant ship maintenance backlogs. These backlogs and the prioritization of aircraft carrier and ballistic missile submarine refueling and overhauls have forced the attack submarine USS Boise to remain pier-side since 2016 when its dive certifications expired. Even with funding available, shipyard maintenance on the Boise can’t commence until 2019 due to the backlog.

These self-imposed reductions in available battle force also further inhibit the Navy’s ability to surge forces when needed. The Navy’s readiness score of “marginal” in the 2018 Index thus seems well-deserved.

The U.S. Navy is in a deep hole. It will not be able to fix all its capacity, capability and readiness issues in one year. It will take a concerted effort by Navy leadership across each of these key areas over years, if not decades, to restore the strength of the U.S. Navy.

Even the most perfect Navy plan will be for naught if Congress fails to provide sufficient and stable funding over many years. Navy leadership focused its 2018 budget on restoring readiness, calling for increased funding for operations and maintenance. But if Congress fails to pass a budget and, instead, simply extends the current Continuing Resolution on spending, Navy readiness will only continue its decline. For example, eleven ship maintenance availabilities would be delayed, reducing ship availability and causing delays in future ship deployments.

Let us hope that Congress can put aside partisan discord and work together to halt any further decay of the U.S. Navy’s military strength.

Thomas Callender is a twenty-year veteran and former director of capabilities for the U.S. Navy and a senior research fellow at The Heritage Foundation’s Center for National Defense.