The U.S. Navy Must Make Sacrifices to Meet the World's Challenges 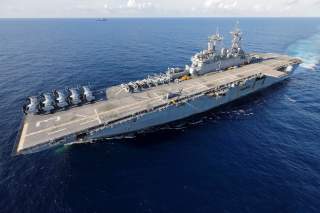 Ever since the United States emerged as a great power with global reach, its naval services have always had to struggle with the paradox of maritime geometry: too few ships to cover far too much space. Where and when to assume risk, therefore, has always been a core part of American naval strategic planning—because even with a robust naval force, it still takes time to move platforms around the maritime domain.

Every generation of strategic planners comes up with its own answer to this conundrum. For the last decade, the U.S. approach has been shaped by a strategic gamble and a burden-sharing concept. The strategic gamble, which was ultimately codified in the 2012 strategic guidance, assumed that key parts of the world had been stabilized or were on a glide path towards peace, especially Europe and the Middle East—meaning that a diminishing number of assets could be concentrated with much greater effectiveness in the Indo-Asia-Pacific theater. The burden-sharing concept, enunciated by Adm. Mike Mullen, then chief of naval operations, was that of the “one-thousand-ship navy”—“an international fleet of like-minded nations participating in security operations around the world.” A global network of partners would help fill in the gaps that the United States could not plug on its own—and would help to mitigate the risk of the gamble of the pivot to Asia by ensuring coverage in other parts of the world.

Events of the past several years have demonstrated that the strategic gamble of the past decade is no longer viable. There are too many traditional great-power and nontraditional naval-security challenges dispersed at too many geographic locations around the world—meaning that the United States is faced with the unpleasant choice of either dispersing its sea power in a series of talismanic deployments in which the capabilities are too few, or else concentrating its forces for effect in one area while leaving others for the future. And while other nations are waking up to the reality that the twenty-first-century world is indeed a dangerous place, with some allies finally beginning to make serious increases in their defense spending, there are still gaps in what they are procuring and what would be needed to make the thousand-ship navy concept a formidable fighting force on behalf of the United States, its allies and its coalition partners.

Adm. John Richardson, the current chief of naval operations, has noted that increasing the number of American naval platforms is necessary to cope with the current rise in global instability—but insufficient; it also requires incorporating new technologies and new concepts and strategic thinking.

If we think of U.S. ships as finite assets, then it makes sense to deploy them in areas of greatest need where other solutions for U.S. power projection and ability to defend and reassure allies are not available. After all, the greater value of maritime platforms is their ability to surge and deploy as needed. But there are also geographic locales where traditional American naval platforms are vulnerable, or where their deployment adds risk rather than reassurance—where potential adversaries have home court advantage or effective antiaccess/area-denial capabilities. George Orwell had famously renamed Britain as “Airstrip One” in 1984; there are a number of American partners whose geographic location offers the equivalent of fixed aircraft carriers—where planes can be based with sufficient logistical capabilities and effective defense mechanisms so as to allow the projection of U.S. power over key maritime domains. Add to that new developments in unmanned surface, air and underwater vehicles, and the United States can provide credible defense assurances to partners who are concerned about their vulnerability to sea-based assaults from potential opponents. This would also free up platforms to be deployed in areas where American diplomacy has been unable to conclude the necessary agreements for the use of in-area facilities.

The United States would like to see more of its partners increase their maritime capabilities, but this does not always mean that they must purchase or be provided with 2017 state-of-the-art equipment when older legacy systems that are still functioning will do the job. Here, we should revisit contemporary Russian efforts to refurbish older Soviet equipment, which, while it might not fare well in a toe-to-toe encounter with a NATO country’s military, has been more than effective in achieving strategic tasks, whether in Ukraine or Syria—and which has symbolically raised our own hackles given the resumption of missions testing our Pacific, Atlantic and Caribbean maritime frontiers. Older systems, which some of our partners are more in a position to maintain, may be better than supplying or selling a smaller number of more expensive state-of-the-art platforms.

Congress may or may not increase the number of new aircraft carriers—but while waiting to see if the appropriations will go through, or for the shipyards to finish the new hulls in time (for we need more maritime coverage now, not in the 2030s), thinking about how creative diplomacy, land options, drones and older items can help plug immediate gaps is worth considering.