The Vanishing of Rand Paul 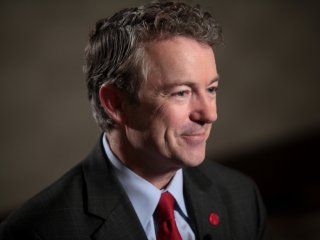 If Republicans hold a debate and none of them argue with each other, is it really a debate?

That’s what I was asking myself before Thursday’s forum in Charleston. It was a bit of a glib question: there are plenty of policy disagreements between the candidates. But nobody has hurled more barbs than Rand Paul, the senator from Kentucky whose libertarian-ish leanings often run up against Republican orthodoxy, and Paul wouldn’t be in attendance. After Fox Business relegated him to the “kiddie table” debate, he ditched the event entirely in favor of a more direct form of democracy. He spent the night tweeting, answering questions on the social media app Periscope and extending his middle finger to the media figuratively--and literally!

Was this a wise idea? I tend to think no. A debate lends automatic gravitas. Extending your middle finger is an act of petulance. The Paul campaign would counter that skipping Charleston gave him time to appear on the Daily Show, Dr. Oz and cable news, which probably had more combined viewers than the undercard debate. Of course, the debate watchers also tend to be GOP voters, who Paul needs to boost his lagging poll numbers. But who knows? Republican candidates who attack media malfeasance often see big returns on their investment, as Newt Gingrich well knows (though he staged his protest in South Carolina, rather than in absentia from it).

Fortunately, the debate managed to be contentious even without Paul. Early on, moderator Neil Cavuto brought up Donald Trump’s suggestion that the Canadian-born Ted Cruz was ineligible for the presidency. Cruz pointed out that Trump’s own lawyers had examined the issue last autumn and concluded that he was a natural-born citizen, and therefore qualified. “Now since September, the Constitution hasn’t changed, but the poll numbers have,” Cruz said to wild applause.

Later, Cruz and Marco Rubio clashed over fiscal policy, with Rubio attacking Cruz’s tax plan as a European-style VAT and Cruz arguing that Rubio wouldn’t sufficiently lower rates. The winner of that exchange was probably Chris Christie, who interjected: “I’d like to interrupt this debate in the Senate to answer the question you actually asked, which was about entitlements.” Christie has become something of a third rail-grabbing exhibitionist, ensuring that Social Security and Medicare reform get a mention amidst all the anti-tax rhetoric. It worked for him here and overall he had a strong performance.

Cruz, too, seemed poised for an almost perfect night when he walked into an unexpected buzz saw. Last time he and Rubio mixed it up over immigration, Cruz emerged victorious; this time the Florida senator was ready. Rubio noted that Cruz had changed his position on green cards, H-1B visas, birthright citizenship—as well as TPA and crop insurance and ethanol and defense spending and Edward Snowden and... It was a devastating litany that won thunderous applause from the audience and offered a peek at Cruz’s biggest liability: his willingness to curtail his political positions to match the conservative flavor of the week. “That is not consistent conservatism. That is political calculation,” Rubio declared.

The Florida senator started off awkwardly. Having seen his poll numbers dip since the last debate, he seemed to be overcompensating with eagerness and caffeine, like Aaron Sorkin had suddenly discovered how to write a believable Republican character. Early on, he launched an attack on Chris Christie’s alleged liberalism that the New Jersey governor shrugged off. But Rubio improved as the night went on and even tossed out some uncharacteristic red meat. “I am convinced that if this president could get rid of every gun in America, he would,” Rubio declared. It was an admission that to beat Ted Cruz, you need to become a little like Ted Cruz.

All the candidates in attendance probably improved their standing last night, with the exception of John Kasich who blended into the scenery. Even Rand Paul made his presence known when a handful of his supporters chanted, “We want Rand! We want Rand!” But how many voters do? The conventional wisdom is rapidly coalescing around the notion that Trump and Cruz will battle each other for the nomination while the other candidates falter. It's a pity that Paul, who could have flourished as an anti-establishment candidate, failed to seize the opportunity and ceded it to Trump and Cruz.