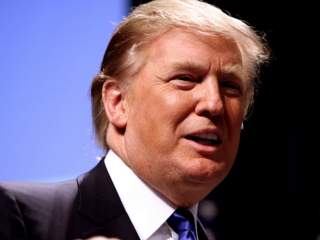 As Donald Trump continues his Shermanesque march through the Republican primaries, the Wall Street Journal continues to fire relentless volleys of cheap shots, pot shots, and the paper’s much hoped for gut shot. Just consider last week’s run-up to what would be Trump’s resounding South Carolina victory.

Just days prior to the vote, the editorial page demanded Trump release his tax returns to call into question the true wealth of the undisputed billionaire. In a front page lead story, reporters also featured a cooked up poll claiming to show Trump falling behind Ted Cruz in a national poll.

This poll result was laughable on its face considering Cruz’s weak South Carolina showing. Cruz lost every single county, including those neck deep in evangelicals.

More broadly, the Journal has waged a relentless war on Trump’s promise to crack down on China’s currency manipulation. It has falsely called into question Trump’s clear understanding of the Trans-Pacific Partnership—which the Journal supports and Trump accurately describes as a horrible deal for American workers and domestic manufacturers.

As reported in Breitbart, the Journal is also fond of using op-ed surrogates to nip at Trump’s heels. Examples include a “pseudo-economics hit piece by Mary O’Grady” on Trump’s anti-NAFTA position, a Karl Rove “take-out” piece declaring Trump as a debate loser and another Rove stiletto describing Trump as the Democrat’s “dream nominee” who would get “creamed” in the general election.

Just why is the world’s journalistic beacon of capitalism trying to assassinate the character and candidacy of one of the world’s leading beacons of capitalism in action? The answer may be found in two words: Rupert Murdoch.

In a modern day version of Moby-Dick, Murdoch has long sought to capture the “Red Whale” that is China—and Murdoch has done this with far more success than Ahab. As a result of his quest, Murdoch’s television channels broadcast more programming into China than any other foreign media group..

Nor is Murdoch’s success surprising given these New York Times salvos against the media mogul:

“Many big companies have sought to break into the Chinese market over the past two decades, but few of them have been as ardent and unrelenting as Rupert Murdoch’s News Corporation. Mr. Murdoch has flattered Communist Party leaders and done business with their children. His Fox News network helped China’s leading state broadcaster develop a news website. . . . Mr. Murdoch cooperates closely with China’s censors and state broadcasters. . . . He cultivates political ties that he hopes will insulate his business ventures from regulatory interference. . . . In speeches and interviews, Mr. Murdoch often supports the policies of Chinese leaders and attacks their critics. . . . His courtship has made him the Chinese leadership’s favorite foreign media baron.”

Given Murdoch’s deep China connections, it is hardly surprising that his media outlets around the globe regularly take a soft line on China—and a harder and harder line on Trump’s candidacy.

At the top of this designated hitter’s list is the Wall Street Journal. But what is also surprising is that the outspoken commentators at America’s Fox News also go along with Murdoch’s peculiar form of self-censorship.

Indeed, if there ever were a forum for right-wing commentators to jump hard on the myriad dimensions of an emerging China threat, it would be at “fair and balanced” Fox. Yet you rarely hear a peep on this issue from the mouths of Neil Cavuto, Sean Hannity, Charles Krauthammer, Bill O’Reilly or Trump’s designated hit woman at Fox—Megyn Kelly.

Instead, the task of exposing the complex dimensions of China’s military buildup—what should be quite literally “red meat” to America’s Right Wing—has fallen on the shoulders of conservative specialty outlets with far smaller audiences.

In the shorter run, the big political question is this: Will Trump continue to withstand the vitriolic attacks on his capitalist flanks from the likes of the Wall Street Journal and Fox? While it is axiomatic that you shouldn’t pick fights with folks that buy ink by the barrel—or regularly win the cable news ratings wars—Trump didn’t pick this fight. He just now finds himself in the WSJ/Fox crosshairs—with only a strong core of voters as his shield.

Peter Navarro is a professor at the University of California-Irvine. He is the author of Crouching Tiger: What China’s Militarism Means for the World (Prometheus Books) and director of the companion Crouching Tiger documentary film series. For more information and access to interview clips from the film, visit www.crouchingtiger.net