The War Against Islamic Terror after Paris 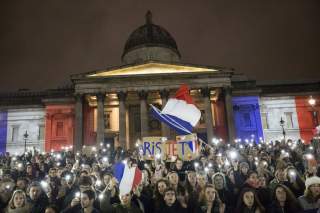 The U.S. response to Islamic extremism has gone through two phases since the 9/11 attacks.  In the early years after the attacks, the Bush Administration treated Islamist terrorism as an existential threat and assumed that it was a symptom of the political and economic dysfunctionality of the greater Middle East.  Washington during this period not only strengthened homeland security and went after al-Qaeda and its affiliates, but also undermined and overthrew state sponsors of terrorism.  The Bush Administration calculated that the Middle East, like Europe and East Asia after World War II, could become a functional and normal region.

Facing massive costs in Afghanistan and Iraq and increased sectarian conflicts in the region, the United States recalibrated. Under President Obama, America maintained robust policies on homeland security and counterterrorism, but adopted a passive and reactive approach to transforming the region. The administration withdrew from Iraq, provided minimal support to the opposition in Syria, and allowed safe havens to emerge after toppling the Qaddafi regime in Libya.

The vacuums left by the United States have benefited the most violent and sectarian elements of the region, fueling civil conflict and allowing the Islamic State to expand its territorial reach. Although al Qaeda in Iraq was defeated, the failure to address the country’s underlying issues allowed IS -- the son of AQI -- to emerge.

In Syria, the U.S. failure to support nonviolent protests encouraged the Assad regime to crack down ruthlessly. Emboldened by the passive U.S. response, Iran has doubled down behind the Assad regime and is deploying Shiite extremists such as Hezbollah to drive its broader sectarian agenda.  In an attempt to compete with Iran, Saudi Arabia and Turkey are increasingly embracing the Islamist wing of the Sunni opposition. The Islamic State (IS) has benefited as conditions have become more extreme. Its effective use of social media in a context of massive refugee flows has made IS a global threat far greater than al-Qaida.

While unique in the scale and scope of its reach, however, the Islamic State stems from the same unabating crisis of Islamic civilization that has brought terrorist attacks to western soil since the mid-20th century. The Muslim world continues to search in vain for a way out of its civilizational decline. Secular dictators failed to deliver throughout the 20th century, and were defeated decisively in the Arab Upheaval. Democrats are on the defensive due to their inability to provide security and competent governance amid political transitions. So sectarian fundamentalists have thrived, not only by providing security amid growing violence, but also by promising to restore Islamic civilization’s past greatness through a return to the faith. Until this crisis of civilization is resolved in favor of stability, secularism, democracy and tolerance, the region’s externalities will continue to reach the wider world.

The Paris attacks call for a significant adjustment in U.S., allied and global strategy to combat Islamic extremism. This reassessment must start with a recognition that the dysfunctionality of the Middle East -- an outgrowth of Islam’s broader crisis of civilization -- is the underlying cause of extremism and terror. IS can be defeated through tougher tactical measures, but the ultimate defeat of Islamist terrorism requires a long term commitment and a comprehensive strategy by the world's major powers, regional allies and local partners to normalize the region. The level of efforts required will likely be of the magnitude that it took to stabilize Europe and Asia throughout the Cold War.  In the short-term, this will involve five steps:

Redouble homeland security efforts: Some restrictions on refugees -- especially from countries with no visa requirements -- will be necessary to prevent IS from recruiting in the West.

Intensify the war against ISIS: Heavier air strikes, more special forces on the ground, and greater military coordination with regional allies will be needed. The Kurds in particularly deserve more support. The establishment of safe zones will allow the United States and its allies to train friendly forces and aid displaced people.

Expand humanitarian assistance for refugees: This, along with other measures, will reduce pressure for migration to Europe.

Galvanize a global alliance to defeat the Islamic State: While NATO should invoke Article V, the challenge requires cooperation among all the great powers. The crisis after all has deep roots with sources both internal as well as external.  Between European colonialism, Soviet-era interventions, and U.S. fluctuations of engagement and retreat, there is much blame to be shared for allowing the Islamist threat to grow into a genuinely global threat. A U.N.-led conference that includes the United States, the European powers, Russia, China, and other relevant states could rekindle global solidarity against the threat and divide roles and responsibilities. A multilateral strategy is needed to develop and fund a program of political and economic reform, as well as assistance to those in the region who favor stability and mutual accommodation.

Catalyze settlements in the Syrian and Iraqi civil wars:  Prospects for an agreement among international powers is more feasible at this point than it is between regional players.  Should the United States and Russia negotiate an acceptable formula for a political transition in Syria that protects the rights of all ethnic and sectarian communities, international powers could then bring regional actors -- especially Saudi Arabia, Turkey, and Iran -- to the table.  Federal or confederal systems in Iraq and Syria, with power-sharing at the center, autonomy for minorities in the regions, and guarantees of basic human rights, appear, at this point, to be the most promising solutions. The Vienna talks are a good start -- but for it to produce effective a Russian-American is a precondition.

Resolutions to the civil wars could lay the groundwork for talks on an enduring security architecture for the Middle East. Southeast Asia’s trajectory since the 1960s may provide the most apt, if imperfect, model for the Middle East. Amid the threat of communism, regional states formed ASEAN in the mid-1960s. In the aftermath of the Vietnam War, the organization emerged as a genuine force for regional stability, catalyzing cooperation and integration on a scale that many once thought impossible.  Today, the “Balkans of Asia” as the region was once known, is well on its way to becoming a dynamic security and economic community. Perhaps negotiations on Iraq and Syria could generate momentum for a new regional dialogue forum to start regulating sectarian rivalries by mutual acceptance and accommodation.

Pursuing a new order in the Middle East will require a generational effort by the international community, with the burden falling mostly on the United States. The Paris attacks have underscored with tragic clarity why the Middle East’s problems cannot be ignored. It is now incumbent on Washington to seize the moment and build support for a long-term agenda of regional transformation.