The War on Hank Greenberg 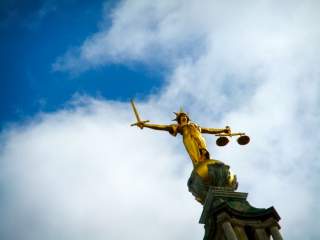 The downtown New York courtroom where 91-year old Maurice R. (“Hank”) Greenberg began testifying this week has all the hallmarks of legal majesty: a robed judge, The Honorable Charles E. Ramos, seated behind an elevated bench; a uniformed bailiff bellowing “all rise” upon the judge’s entrance; the American flag; IN GOD WE TRUST on the wall soaring 20-feet high.

Greenberg, who is a member of the board of the Center for the National Interest, has devoted his life to defending the American freedoms represented by the courtroom, not only as a trained lawyer and corporate titan who built American International Group (AIG), but also through his service in World War II: he was awarded the French Ordre National de la Légion d’Honneur in June 2014, the 70th anniversary of D-Day. Tom Brokaw singled him out as a member of the Greatest Generation, lauding his indomitable work ethic and keen understanding of Asia.

Yet none of this has deterred a series of ambitious New York attorney generals from trying to destroy him. At this trial there is thus a distinct air of overkill: a half dozen lawyers on each side of the well in a room stuffed with more than 50 boxes of documents, whose average age is 16 years, and a half dozen reporters in the jury box—there is no jury in this case—typing furiously as two stenographers record every word. And beneath it all is a miscarriage of justice.

For one, the case is politically motivated. In New York, the attorney general is an elected official, a politician often angling for higher office. This case was filed in 2005 by Eliot L. Spitzer, a Democratic partisan, shortly after Greenberg left AIG. Spitzer sought favorable publicity from pursuing Greenberg, a prominent Republican business leader and confidant of the nation’s senior Republican leadership from Nixon to Reagan and the Bushes—though equally successful working with Presidents from Carter to Clinton to promote American interests.

Spitzer also went after Greenberg’s friends and family. In addition to naming his colleague and AIG finance chief, Howard I. Smith, in the suit, he harassed John C. Whitehead, the former CEO of Goldman Sachs and Republican undersecretary of state, and Kenneth G. Langone, the New York Stock Exchange director who helped found Home Depot.  Spitzer targeted Greenberg’s son Jeffrey, then leading Marsh & McLennan, declaring to his Republican predecessor, Dennis C. Vacco, that he was about “to take those mother fuckers down.”

The result in the case of AIG was perverse: Spitzer’s overzealous assault on Greenberg and AIG destroyed AIG’s value for shareholders and employees alike, along with many other constituencies.   It is impossible to square this foreseeable outcome with Spitzer’s claim to be protecting the public from corporate malefactors as the self-promoting “Sherriff of Wall Street.”

The ethically-challenged Spitzer—he subsequently resigned New York’s governorship after admitting to attempted criminal evasion of federal banking laws in order to cover up multiple criminal solicitations of prostitution—breached numerous principles of legal ethics in his broadsides. Before filing Greenberg’s case, for example, he lodged accusations on ABC’s Sunday morning political talk show, This Week, violating rules barring prosecutors from prejudicial public comment on pending investigations. Spitzer even suggested a criminal case in the works, which is ludicrous—and never filed—because no crime occurred.

Despite the tawdry origins of this trial, and that most of the claims Spitzer alleged have been dismissed over the years, Spitzer’s successors have kept the case alive for 11 years. Both successors are politically ambitious Democrats: first Andrew M. Cuomo, subsequently elected Governor of New York, and now Eric T. Schneiderman, a former member of the ethically-infamous New York State Senate, likewise signaling gubernatorial visions.

The second defect in the case is that the New York State civil law that Spitzer, Cuomo and Schneiderman invoke, the Martin Act of 1921, is both crude and anachronistic. It permits the state attorney general to enforce state securities laws of all kinds, and quaintly encompasses within “fraudulent practices” a litany of infractions that include administrative faults like failure to pay modest annual registration fees or to provide basic broker-dealer information.

Accordingly, the Martin Act does not require prosecutors to prove deceptive intent (scienter, is the legal term of art). Historically limited to claims against the likes of boiler room stockbrokers and converters of rental apartments into co-ops, Spitzer liked how the statute dispensed with the need to prove scienter, a burden to prosecutors. So he made the Martin Act his weapon of choice against New York executives who might at worst commit the equivalent of foot faults in tennis.

While denying federal preemption is an understandable posture for elected state prosecutors, what’s perplexing is that none of the New York courts that have allowed this trial to proceed have come to grips with the argument, despite both sides fully briefing it.  So Greenberg and Smith have requested the U.S. Supreme Court to review the issue, and their petition is pending, even as the trial is underway in lower Manhattan.

A chief reason for federal preemption is to avoid exposing people to overlapping concurrent federal and state claims. Greenberg’s situation is a perfect example.  Years ago he settled a federal case arising from exactly the same facts as the New York prosecutors are tenaciously pursuing. Unless the U.S. Supreme Court intervenes, at this point, he faces a form of double jeopardy.

Another problem with the trial is that the only remaining claims—just two—are both trivial and technical. As for size, the claims concern alleged wrongful increases in insurance reserves of $500 million at a time when AIG boasted reserves of $25 billion. At the time, AIG commanded assets of $800 billion and earned $10 billion annually. The challenged transactions, the New York prosecutors concede, had no effect on company earnings or owners’ equity.

As for substance, one claim alleges that AIG signed a $500 million reinsurance contract with Gen Re (a subsidiary of Warren E. Buffett’s Berkshire Hathaway, Inc.) that did not transfer enough risk to qualify for the accounting treatment AIG gave it. So reserves were 1/50 too high. (This contract was the subject of a separate federal criminal case against other executives of AIG and Gen Re.)  The other transaction was intended to reclassify $200 million of insurance losses of a small AIG auto-warranty unit as investment losses—an arcane maneuver apparently done to mediate internal rivalry among AIG’s famously competitive managers.

Besides politics, preemption, and triviality, the trial is an expensive diversion of resources. In the courtroom this week are millions of pages of documents that scores of lawyers have spent tens of thousands of hours scouring for more than a decade. A dozen lawyers are in court for days on end listening to the prosecutor cross-examine insurance executives while scrutinizing specific words in contracts, memos, emails, and reports made 16 years ago. Greenberg, who continues as chief executive of a large private insurance company employing 3000 people, fields thousands of questions from a prosecutor who alternates between being inaudible as he strays from the lectern’s mic to raising his voice in anger.

The prosecutors assert that they sustain the case in the name of holding business executives responsible for serious transgressions. They often reference Enron, the fictitious financial mirage, as if there is some equivalence between that and the mighty financial fortress of AIG, which is patently absurd. They exploit the tarnished image AIG assumed after the 2008 financial crisis, despite that occurring years after Greenberg left and having nothing to do with the case at hand.  In short, as a visit to the courtroom will attest, this trial is an indecorous display of prosecutorial power that appears calculated more for political aggrandizement than administration of justice.

So it will be up to Judge Ramos to administer the case, weigh the evidence, and render a judgment. While I do not know His Honor personally, from my vantage point in court Thursday I have hope that he will be impartial. For example, at one point during cross examination Thursday, the prosecutor presented an internal AIG document reflecting an exchange among executives reporting what yet others had said about a transaction.

Greenberg’s lawyer objected to its admission as hearsay—really double hearsay given a third-party communication reporting on a communication. The prosecutor defended the admission as a business record and explained that his purpose was practical—just trying to get Greenberg to explain why this curious auto-warranty transaction was done.  Judge Ramos quipped that this is the kind of evidentiary skirmish that gives him sleepless nights like he had the prior night.