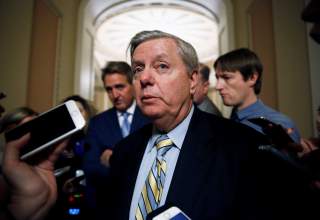 A White House official launched repeated, pointed attacks on Sen. Lindsey Graham of South Carolina, on Thursday afternoon. According to the official, “If you look at the history of failed immigration reform bills, at some point you have to ask yourself the question whether Lindsey Graham’s involvement in drafting those bills means that rather being the solution to the problem, Lindsey Graham’s presence on those bills is the problem?”

The official proceeded throughout the call to single out the senator individually for stark criticism. The attacks prompted many in the media on the group phone call to demand that the call be placed on the record, and for the official to be identified explicitly, but that request was declined.

And for the second time in as many days, the White House emphasized that it is likely done negotiating over immigration -- it has wholeheartedly backed a bill written by Sen. Chuck Grassley, that it hopes could get as many as nine Democratic votes in the upper chamber, while concurrently offering support for a more hardline House bill from Rep. Robert Goodlatte.

The administration views the Grassley bill, which omits mandatory E-Verify and could potentially expand the number of illegal immigrants with DACA-type status, as conciliatory enough. But that hasn’t stopped other senators, namely Graham and John McCain, historically party pointmen on the issue, from offering competing or parallel legislation.

The result has been an increasingly vicious war of words between Graham, particularly, the Department of Homeland Security and certain White House officials.

As the administration was briefing reporters early Thursday afternoon, Graham told Capitol Hill reporters: “As long as Stephen Miller is running the White House and Tom Tancredo’s press secretary at DHS,” progress on the matter will commence at a glacial pace.

Graham’s comments against Miller drew a quick rebuke from Sen. Tom Cotton, a leading immigration hawk: “Embarrassing for a senator to attack a staffer. No worse example of punching down & bullying someone who can't defend himself.”

Concurrently, the White House official told reporters: “I also just want to make a quick note about Senator Graham’s attacks on the Department of Homeland Security. The men and women of the Department of Homeland Security are heroes. They keep us safe. The operators at DHS have painstakingly, for months, have outlined for Congress the reforms they need to save and protect American lives, and national security. And Senator Graham has been an obstacle to those reforms.”

Aside from threatening Thursday to veto his bill (co-sponsored with Senate Minority Leader Chuck Schumer), the president has not commented publicly on Graham personally in recent days. But the White House comments mark an abrupt shift from what had been an increasingly chummy relationship between Trump’s people and Graham. Once bitter primary campaign rivals, Graham’s name has even been in the conversation as a future secretary of State under Trump.

“If he wants to be part of the solution, he should work with, and not against the rank-and-file professionals at the Department of Homeland Security, who are committed to keeping Americans safe,” the official said. The official noted that this line of argument was not “hyperbolic” and that when Department of Justice officials saw Graham’s most recent legislative attempt that they were “stunned beyond words.”

The White House emphasized that it wants a bill passed this week: the Grassley bill. It is a bill that has gathered consensus conservative support (including from Cotton), with some exceptions-- namely, choice hardliners outside of Congress. “It’s fine in spirit,” Scott Greer, an editor at The Daily Caller told me, adding: “But it’s probably not going to pass.”

And if the March 5 deadline for DACA recipients elapses, the administration says the Department of Justice will not seek an extension, because the Attorney General Jeff Sessions views DACA as “likely unconstitutional.” The White House emphasized that the DACA recipients will not be deported en masse in that scenario -- criminals and national security threats will take priority -- and that the DACA recipients would then join the millions of illegals in the United States who have yet to be removed.

Thursday’s comments out the White House are also notable because they bely an emerging narrative from the administration: immigration should be thought of as a national security issue.

Graham’s legislation ignores key “national security concerns,” said a White House official. “If it wasn’t already obvious,” Graham’s immigration efforts are “DOA,” said the official, and a return to a pre-9/11 mentality, noting that under Graham’s proposal, many of the hijackers “would not have been a priority for removal.”