The Wig Is Up, Rachel Dolezal 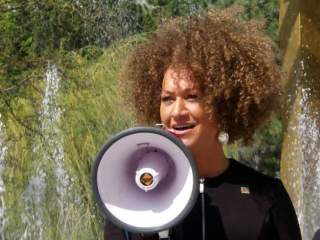 The stereotype about affirmative action persists that you don’t have to actually be qualified—you just have to be black, and the opportunities will come to you.

Rachel Dolezal exploited that stereotype for all it was worth, posing as a light-skinned black woman with the purpose of touting the black cause. She used her MFA from Howard (not even a PhD!) to land a teaching job at a small university in Washington and an esteemed position as president of a local NAACP chapter. That all came crashing down last summer when Rachel’s parents, who are both white, declared that her presentation as a black woman­—tan skin, “natural” curly hair that suggests partial African ancestry—was false. She was just a white girl playing dress-up. The backlash was immediate and vociferous. Dolezal lost her job, resigned from the NAACP, and the last time the media checked in with her, was braiding black women’s hair a few days a week while waiting for the arrival of her third child, whose father is in absentia.

Dolezal has briefly reappeared on the headlines this week, as she has recently secured a publishing deal to write about race. Dolezal’s career is finished as an “educator, justice activist, writer and artist” as she describes herself on her LinkedIn page. It’s an egregiously offensive move that can have no other motive than profiting from scandal. Since this is the year where no topic is too obvious, I’ll go ahead and spell it out: race is determined by birth, and you can’t just change races because you want to. The book is a death rattle to a nondescript career and another instance of insulting hardworking supremely qualified black women who still have to prove their worth. If Dolezal wanted to redeem her reputation, she’d turn down the deal, but she probably needs the money. Hopefully no one will read it.

There’s a pernicious African American trope that peaked in the early twentieth century and largely disappeared after the Civil Rights Movement: the tragic mulatta. The mulatta appears white but has African American parentage, and hides this fact in an effort to gain acceptance in white society. She rejects her black ancestry and starts over in a new town. She marries a white man. But somehow it is revealed that the woman is indeed partially black and she loses her social standing. This story was presented as a fable in novels and films as a warning to light-skinned black women to never forget their place in society, lest they lose everything. It’s curious how the colors may be reversed in Dolezal’s case, but not the story. And you can sympathize with the tragic mulatta in a way that you simply can’t with Dolezal. She attempted to take a shortcut by impersonating a black woman because she felt the black struggle was alluring.

The subtext, of course, is cringeworthy: an average white woman’s efforts are the same as an exceptional black woman’s, because affirmative action has a lower “bar to entry” to a path of success and recognition. The truth, however is simply that no matter where you look, people of color are underrepresented in most professional industries. Many, many black professionals have to work twice as hard just to squeak by—who are arguably more qualified than Dolezal but have had the prudence to avoid scandal. My sincere hope is that the reality of having a baby snaps Dolezal into reality, and she finds a real job that she acquires and maintains on her merits, and that she takes off that ridiculous wig. She’s not fooling anyone anymore.