There Is a Military Option in Venezuela: Just Not the One You Expected 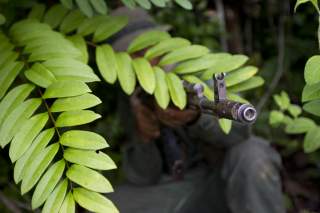 Last week, Acting Venezuelan President Juan Guaidó instructed his representatives in Washington to “open direct communications” toward possible “coordination” with the U.S. military. But what can the American military do to further his cause?

The notion of putting U.S. boots on the ground in Venezuela is wrought with peril. Venezuela has a population of over thirty million, and an American invasion may be exactly what President Nicolás Maduro needs to galvanize his base. Any American presence could cause a prolonged insurgency among a distrustful and well-armed population, not to mention Maduro’s military numbering around 350,000. Similarly, kinetic strikes into the country have the potential to exacerbate the situation further, as there is no easily identified center of gravity that would bring an end to the regime.

Flipping the Venezuelan military’s loyalty to Guaidó, however, would empower a new administration, and end the political crisis in short order. To achieve this feat, America and its allies can attack the military’s illicit narco-trafficking income and offer amnesty in exchange for support of Guaidó.

In 2005, the country formally issued a persona non-grata status for all U.S. Drug Enforcement Agency personnel and started a new “anti” drug framework that expanded jurisdiction from the National Guard to all branches of the military. Before this shift, the National Guard allowed narcotics trafficking to occur in exchange for payoffs. However, in 2005 the armed services began competing for access to the cartels. At the outset, the military provided intelligence and security to the Columbian cartels operating in Venezuela; however, their role metastasized into military units shipping the narcotics and the cash themselves.

The Venezuelan military “cartel” became known as the Cartel of the Suns, and it gained so much power that in 2011 they began arresting Colombian traffickers and taking their supply routes and eventually started dealing directly with the Mexican cartels and international traffickers. Involvement in the drug trade has saturated the military, and it incentivizes the continued status quo by those that are profiting. This key factor has perpetuated the crisis that is nearing its ninth year. Maduro’s longevity has been questioned at every seemingly impossible impasse, but as long as the military remains loyal and the drugs and money continue to flow, Maduro will remain.

The United States Southern Command and its international partners could attack the illicit funding by merely altering its current operations. Southern Command operates joint civilian-military missions to mitigate the illegal drug flow into the United States, and their successes are remarkable. The efforts of the Joint Inter-Agency Task Force-South (JIATF-S) account for 85 percent of all cocaine seizures by any U.S. government entity and 40 percent of all global interdictions while covering a land area the size of the continental United States. According to their statistics, 82 percent of the drug trade from Latin American to the United States travels via the Pacific corridor while the Western Caribbean sees 11 percent of traffic and the Eastern Caribbean corridor see the remaining 7 percent. Enforcement is therefore distributed according to these geographic trade routes. This practice can be temporarily shifted to focus on Venezuelan drugs. America, and partner countries, efforts could shift approximately 80 percent of their resources to the Caribbean corridors, where Venezuela needs the sea and airspace to navigate.

Current operations support international partners’ law enforcement via Air Force intelligence, surveillance and reconnaissance capabilities, and this program could be focused on all air traffic out of Venezuela. Specifically, Washington should focus on flights from the Apure region where data suggests aerial shipments often originate and can be targeted. Furthermore, the DEA assesses that 70 percent of Venezuelan drugs flow through Puerto Cabello by sea and identifying these ships in port and interdicting them as soon as possible is critical to impacting the cartel’s operation.

The focus of the entire JIATF-S operational resource repertoire on one country could have devastating effects on the Cartel of the Suns. The rank and file Venezuelan military members would be forced to consider living off their Bolivarian salaries as the flow of U.S. dollars evaporates. Another olive branch of amnesty, appropriately timed, from President Guaidó could be the tipping point in the crisis. Furthermore, it should be evident to cartel members that the increased U.S. enforcement will continue so long as Maduro remains in control of the country. Only under these conditions will we see where their loyalty truly lies.

To maximize effectiveness, this effort could be synchronized with additional civilian levers of power. Upon successful interdictions of drugs and money in the Caribbean, the Treasury and Justice Departments could multiply the effects of the seizures by respectively adding sanctions and indictments against the responsible segments of the military. The overwhelming enforcement in a relatively small area of operations combined with targeted legal and economic actions would bring tremendous pressure on the Venezuelan military that would make it suddenly seek an off-ramp.

This enforcement prioritization may temporarily increase the drug traffic into the United States from Columbia, Bolivia, and Peru, however, U.S. Border Patrol, Customs and Border Protection and local law enforcement will continue to play their role in narcotics interdiction. Furthermore, traffickers will be unable to plan for this relative reduction in enforcement, which should prevent a calamitous influx of drugs across the southern border. Finally, the opportunity for narcotics interdiction to achieve a national security objective has arrived, and the United States and President Guaidó should seize it.

Michael T. McLean is a civilian student at the U.S. Naval War College. The views expressed are his own.