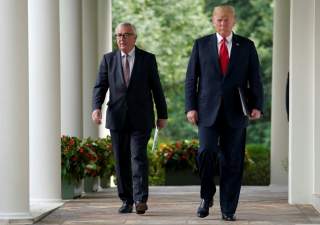 The “trade war” has slipped out of the headlines as quickly as it slipped in, after President Donald Trump’s meeting with EU Commission President Jean-Claude Juncker seemed to promise that Washington would stop escalating and go back to the more familiar negotiating—in fact, negotiating in contexts and using frameworks put forward by pro-trade leaders from industry, Wall Street and both political parties for at least a decade.

But deciding that everything is back on track would be wrong. Trump’s tariffs and the international responses, which by one estimate will eventually cost half a percentage point of GDP and more than 360,000 jobs, are still in place.

As ideological factions across the full range of American politics try to stitch together policies and slogans for 2020 and beyond, it would be a shame to miss the lessons Trump’s trade wars, round one, have to teach us. The U.S. economy is utterly dependent on cooperative, non-zero sum international relations—with markets, supply chains, innovators and labor. Neither our policy tools nor our politics match that fact. And, outside the ivory tower, there is no such thing as free trade.

Let’s take that last point first. In his press conference with Juncker, Trump stayed on-script to call for “no tariffs, no barriers, no subsidies.” That’s perfect free trade, like the Intro Econ course. Oh, except not autos and not agriculture. Those two sectors receive significant protection in both the United States and Europe, and make up almost 20 percent of U.S. total exports.

If the policy debate began from the premise that the United States is not going to have “free trade” any time soon, it could then proceed to the real questions: where could shifts in international economic policy actually foster economic growth, good jobs and community health? How would candidates prioritize those goals? And what tools can produce actual economic shifts, rather than just rhetoric?

Those questions point to the second problem exposed by Trump’s trade skirmishes—the economic policy tools we have don’t match the economy we live in. Last week’s administration response that it would use pre-existing authorities to provide a $12 billion response to farmers affected by the tariff wars in agriculture illustrated the problem brilliantly. The Agriculture Department programs that the Trump administration has dusted off date to a time when the agricultural economy was structured entirely differently—most subsidies went into the wallets of family farmers and were spent in local communities, as farmers still made up more than 20 percent of the population, with farms averaging half the size of today. $12 billion dollars is both a lot of money—as was pointed out by Connecticut Democrat Chris Murphy, it would buy a year of college for a million students, or hire 250,000 new teachers. At the same time, it is wholly insufficient to the challenges facing rural America. The 20 percent drop in soybean futures since the tariffs were announced represents $8 billion in farm income all by itself. And these challenges had been building. Dairy farmers had been struggling under four straight years of declining prices and global oversupply. Domestic demand is falling as well, as American consumers enthusiastically eat up competing claims about the health of soy, almond, oat, all the “milks from substances that can’t technically be milked.” Analysts warned last year that big pork producers were expanding at a rate that could only be managed by significant increases in exports.

In short, the U.S. agricultural sector cannot survive without exporting. Farm lobbies are fond of romantically declaring that they just want to be allowed to feed the world. The reality is less benevolent and less voluntary. Author Ted Genoways describes the relationship this way: “they’re not only dependent on us for supply, but we’re also dependent on them for demand.” The class of Americans we most fondly idealize as proudly independent since Jefferson, the alternate model of self-sufficiency to a web of ties with corrupting and alien foreigners, is now utterly dependent on cooperative, non-zero sum relations with markets around the world, not to mention global efforts to combat climate and disease disruptions and ensure a steady flow of workers. Corporatized American agricultural interests are confirmed globalists—and heavily invested in the international order that protects their patents, inexpensive labor, markets and transport.

Finally, there’s the matter of politics. Much economic rhetoric these days on right and left comes down to painful squirming intended to appeal to disaffected constituencies without new policies to match. But the reality is that existing tools, and the categories they come in (“trade,” “opportunity agenda,” “middle class tax cut”) are inadequate to either the politics or the substantive challenges of the moment.

Again, consider the farm tariffs and “bailout.” Countries targeted by Trump tariffs have been quite explicit that their retaliatory measures are intended to hurt red states and districts. So is the Agriculture Department response. But will it? The three commodities slated to receive the lion’s share of benefits under the $12 billion dollar support package previewed this week are soybeans, pork and dairy products. Eleven states produce 75 percent of the U.S. soybean harvest. Nine went for Trump in 2016. Six have Senate seats in play, including three currently held by Democrats and rated as tossups. Ten states produce 60 percent of U.S. pork—seven also in the soy top elvent. Eight went for Trump. Six have Senate races. The top ten dairy states are a bluer lot—five went for Clinton in 2016—but nine of the ten have Senate races this year. The dairy states, by the way, include powerhouses where farmers’ political voices are relatively muted—California, Texas, New York. The announcement of the spending will make supporters feel that they are not forgotten—a key aspect of Trump’s political success—but they will not prop up declining prices, change planting decisions or replace lost markets.

It is always possible that they make the difference in a district, or a state, that determines control of a house of Congress this fall. It would be a terrible mistake, though, for leaders of any ideological stripe to conclude that bluster plus bandaids is a long-term remedy. Whichever your policy dream: frictionless trade or managed competition, the tools the U.S. government currently provides are hopelessly small and outmoded. They are unlikely to win anyone a presidential election—though evidence suggests they can lose one.

U.S. President Donald Trump and President of the European Commission Jean-Claude Juncker walk together before speaking about trade relations in the Rose Garden of the White House in Washington, U.S., July 25, 2018. REUTERS/Joshua Roberts​