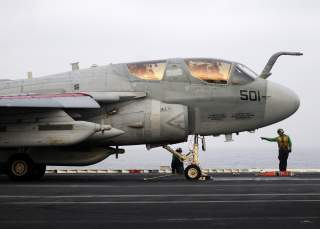 There’s no shortage of waste in the daily operations of the Pentagon. Inefficient, culture-bound business practices, excessive layers of management, redundant capabilities between the military services and the defense bureaucracy—all contribute to excessive waste.

There is nothing new in this observation. Thus, when the Washington Post broke the story about a study supposedly identifying “evidence of $125 billion in bureaucratic waste,” the figure immediately gained credence. The suggestion that a duplicitous Pentagon had “buried” the embarrassing report made the story all the more sensational, the number all the more believable.

And that’s unfortunate, because the “buried” study, although begun with the best of intentions, resulted in a deeply flawed analysis. The Defense Department’s decision to disregard it was absolutely correct.

As the head of the Army’s business transformation office for three years, including the period in which this study was conducted, I strongly supported the initiative. It started with the worthy goal of identifying how many people and how much money the Department of Defense was devoting to what the private sector calls “back-office functions”: human resources, finance, logistics and real property management.

For years, the DoD had wanted to get a better understanding of its “cost of doing business,” but until then had been no serious effort to do so until this study was launched.

Make no mistake: the size and complexity of the DoD make this a herculean task. The department employs more than three million people—service members, civilians and supporting contractors—in locations all over the globe. Moreover, there was no existing method for categorizing these people into the functions they perform, including back-office functions.

To perform this type of analysis, therefore, would require extensive time and effort to properly identify the roles of all involved in these functions. Unfortunately, the necessary time was not provided; the support contractor hired was given only a matter of weeks to conduct this analysis—a wholly insufficient period, and one that did not allow for even the most fundamental of errors to be detected and corrected.

For example, the study categorized Army combat engineers—the soldiers who clear minefields—as “real property managers.” In similar fashion, wide swaths of personnel were swept up in this data collection and miscategorized as “back office.” The problem was not limited to Army categorizations. Every other military service raised concerns about the personnel categorization.

The response to these concerns was wholly inadequate: a breezy assurance that “there’ll be time to clean this up later.” But the data was never cleaned up. Over the objections of the services, it became hailed as “authoritative” by the study sponsors. Worse, the faulty study was subsequently used by the Defense Business Board, an advisory body for the Secretary of Defense, as the basis for a series of faulty recommendations.

The Defense Business Board (DBB) took the flawed baseline of personnel and money purportedly serving back-office functions, and proceeded to make a series of ill-informed assumptions about the amount of savings that could be realized within each category.

For example, the DBB initially advocated reaping billions in savings by requiring “back-office functions” to produce annual productivity gains of 7 percent to the baseline, resulting in billions of savings. In calling for this presto-chango “reform,” the board ignored the fact that DoD back office functions had already been the target of multiple previous savings studies and reductions.

They also ignored the fact that during the period 2009–15, U.S. productivity was essentially flat, growing at only 1.3 percent. They never explained how the 7 percent growth target could be possible.

Their methodology, which amounted to little more than magical thinking, then turned to proposing arbitrary cost savings in categories such as IT or labor costs—again, without any explanation of how such aggressive savings could be achieved in these mature functions, which had already been extensively studied, and from which savings had already been squeezed. Further explanation was never forthcoming.

Faced with unanimous criticism of the hasty methods and unfounded results of this study, the leadership of the DoD was right in its ultimate decision not to proceed with the study’s recommendations. All of this was discussed publicly and never in secret. In fact, the DBB recommendations were quickly posted to a public website.

Claims that the study was “buried” are completely invalid. What remains valid, however, is the need to establish an accepted method for determining the size and cost of DoD back-office functions. Once that is done, the Department can devise an effective plan for rooting out waste and giving taxpayers a bigger bang for their buck.

Lt. Gen. Tom Spoehr (U.S. Army, retired) is the director of The Heritage Foundation’s Center for National Defense. He served as the Army’s Director of the Office of Business Transformation from 2013–16.