There is a Real Risk of War with Iran 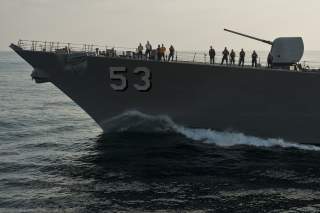 U.S. participation in the Iran nuclear deal has now ended. President Donald Trump’s administration has chosen to reapply sanctions to the Islamic Republic of Iran six months after announcing America’s exit from the 2015 agreement. This is part of a broader strategic shift by Washington in which strong pressure is to be applied until Tehran makes concessions in twelve areas. This is not the first time America has squeezed Iran. The years before the nuclear deal had seen a similar pressure campaign. We forget just how dangerous those times were. The risk of war was real. Today, the risk is greater. War could spring by accident from one of the many friction points between Iran on one side and America and its regional partners on the other. And the more the pressure strategy works and forces Iran to choose between collapse and surrender, the more Iran will look for alternative paths. One of those paths is escalation. We have entered a perilous new phase.

The last peak in confrontation with Iran, from 2010-2012, included a fairly serious war scare. Jeffrey Goldberg, a journalist with strong connections in both the United States and Israel, penned a long feature in the Atlantic about the possibility that Israel would launch a surprise attack on Iran’s nuclear program. In interviews with security bigshots from America, Israel and the Arab world, wrote Goldberg in September 2010, “a consensus emerged that there is a better than 50 percent chance that Israel will launch a strike by next July.” U.S. Central Command (CENTCOM), he reported at the time, had even asked for orders about what to do if its aircraft patrolling the skies of Iraq detected the strike in progress. It later emerged that CENTCOM was so concerned that a surprise attack was in the works that its analysts were monitoring the phases of the moon to suss out when Benjamin Netanyahu and Ehud Barak might pull the trigger. CENTCOM’s worries turned out to be well-grounded. A number of top Israeli security professionals at the time clashed with Netanyahu and Barak over orders that they thought indicated an imminent strike.

There was a covert side to this struggle, too. In the cyber realm, the United States and Israel collaborated on the Stuxnet virus, wrecking Iranian centrifuges in 2010. An Iranian answer, the Shamoon virus, hit Saudi Aramco’s computer networks in 2012. In the streets, a string of targeted assassinations from 2010 to early 2012 killed four Iranian nuclear scientists and wounded a fifth.

The attacks, generally thought to have been sponsored by Israel, primarily used “sticky bombs” that motorcyclists attached to the targets’ vehicles. The last killing occurred in January 2012. In February 2012, a similar bomb wounded the wife of the Israeli defense attaché in India. The same day, a bomb was discovered near the Israeli embassy in Georgia. The day after, a band of Iranian nationals in Thailand accidentally blew up their safehouse; another blew off his legs after a grenade he threw at police took an unlucky bounce. In July, a Hezbollah suicide bomber blew up a bus of Israeli tourists in Bulgaria, killing eight: himself, the Bulgarian bus driver, four Israeli twenty–something tourists, a pregnant Israeli woman and her unborn child.

The covert conflict could have been much bloodier. Several Iranian plots were thwarted at the same time, most notably a bizarre plan to get Mexican cartels to blow up a Washington, D.C. restaurant and kill the Saudi ambassador to the United States. On the other side, we learned just this week that Iran had cracked a covert CIA communications system around this time, too, though we can’t be sure if this had any impact on non-espionage activities.

In the new confrontation with Iran, the drumbeat of violence is steadier and louder. There are rowdy new players adding to the din: Saudi Arabia and the United Arab Emirates. On the Saudi side, the recent murder of dissident Jamal Khashoggi is a warning sign that they lack the competence and professionalism of the Americans and Israelis that led the charge last time. Sending your own bodyguards to go after a man in your own consulate while his fiancée waits outside is not a great moment in plausible deniability. The Emiratis, meanwhile, had to outsource targeted killings in Yemen to mercenaries. And if the long Saudi war in Yemen is a guide, escalation may be deadly, but not decisive, and could entangle America.

The new round of struggle has focused on Iran’s internal frictions. Over the summer, an Iranian diplomat was arrested in Belgium after allegedly giving members of a dissident group a bomb intended to target one of the group’s major meetings. In Iran’s west, an array of Kurdish separatist groups and the Islamic Revolutionary Guard Corps have been at each other’s throats in recent months. In September, Iran attacked a Kurdish separatist compound in Iraq. Also in September, an attack on an Iranian military parade in the southwestern city of Ahvaz killed twenty-four. An apparent Iranian revenge plot against Ahvaz separatists was just uncovered in Denmark and Norway, and Iran also launched ballistic missiles into eastern Syria, hitting targets within a few miles of American forces.

It isn’t clear if outsiders are supporting these groups. But there are many hints. Saudi crown prince Mohammad bin Salman has spoken about conducting his kingdom’s struggle with the Islamic Republic “inside Iran, not in Saudi Arabia,” while a senior Emirati official appeared to justify the attack on the parade in Ahvaz in similar terms. The dissident group targeted by the diplomat in Belgium has a more ambiguous relationship with violence—it claims to have abandoned terrorism and was removed from the U.S. State Department’s list of terror groups in 2012. Yet it seems to have ties to the Saudis—the former head of Riyadh’s intelligence service has spoken at their annual conference. So has Trump’s national security advisor, John Bolton— and prior to joining the administration, Bolton had suggested that the United States should consider support for separatism in Iran, including by Kurds and the Arabs around Ahvaz.

Even if this is all coincidence, the Iranians have surely noticed. So far, their own attacks have targeted the separatists more than their possible external backers. Yet there is no guarantee that this will continue, especially if the attacks become more serious. That may well happen. The uptick in violence has paired with the current administration’s pursuit of tight relations with the Saudis and Emiratis and its tough talk toward Iran. Security scholar Barry Posen has noted that allies can take advantage of a stronger power’s support to behave more aggressively—a form of moral hazard he calls “reckless driving.” Our Gulf partners might see America’s power, strategic partnership and ill will toward Iran as the insurance policy underwriting their own actions. They’ll own the gains; we own much of the risk.

More than one of the last three options may be true at the same time. What, for example, drove the September attacks on U.S. diplomatic facilities in Baghdad and Basra, Iraq? The State Department shuttered the Basra consulate, blamed Iran for the incidents and threatened to hold Iran responsible for future attacks. But the attacks came amid locally driven chaos in Basra that burned down Iran’s consulate there and sharp-elbowed political maneuvering among Iraqi factions after May’s elections—maneuvering in which some of the most violent factions see America as a player. The potential for miscalculation, misinterpretation and bad luck is high.

Thus, even if nobody among the United States, the Gulf Arabs, the Israelis, and the Iranians wants a war, a war could easily happen. Worse, some of the players may see war as preferable. Bolton called for an attack on Iran in 2015. Trump allegedly made him promise not to start any wars when he brought him on as national security advisor. But it would not be surprising if he were a voice for escalation in moments of friction, and a voice for Iranian guilt if the intelligence after an incident is ambiguous. Similarly, some among the Gulf Arabs might see the Trump administration as a prime opportunity to maneuver America into fighting Iran on their behalf. They know that this opportunity will last two to six more years (depending on the 2020 presidential election) and that even the removal of advisors like Bolton and Pompeo or ongoing implementation of the administration’s Russia- and China-focused strategy could bring that opportunity to an end.